Irish consumer sentiment weakens sharply but not surprisingly in April

Decline in Irish consumer confidence notably larger than that in US…..

Irish consumer sentiment showed the sharpest monthly decline in the twenty four year history of the survey in April reflecting a dramatic change both in Irish economic conditions and household financial circumstances as a result of Covid-19 and the associated health related shutdown of substantial elements of business and social activity.

The KBC Bank Consumer Sentiment Index fell to 42.6 in April from 77.3 in March. While the April reading is still marginally above the low point of the index (39.6) recorded in July 2008, the monthly change in April is about two and a half times as large as the next largest monthly drop.

The fall in Irish consumer confidence in the month of April alone is equivalent to about half the decline seen in sentiment through the period when the Irish economy moved from boom to bust. Judged in terms of typical monthly fluctuations in the sentiment index, the scale of change recorded between March and April might be expected with a frequency of around every couple of hundred years. As such, the April reading suggests a sea-change in Irish consumers’ thinking about their economic circumstances in response to the Coronavirus.

Are consumers less scared in the ‘States?

As the diagram below illustrates, the change in Irish consumer sentiment in April (-34.7) is notably larger than that seen in the preliminary reading for the comparable metric for the US (-18.1) although the latter is also the largest monthly decline in the history of the US survey. The larger decline in the Irish survey reading may owe something to a greater consistency of thinking in Ireland as to the nature and extent of the current crisis that may have encouraged a broader awareness of related economic risks. Arguably of greater importance is the likelihood that many Irish consumers still carry notably greater ‘scarring’ from the recent financial crisis than their American counterparts reflecting the greater length and depth of the crisis on this side of the Atlantic. 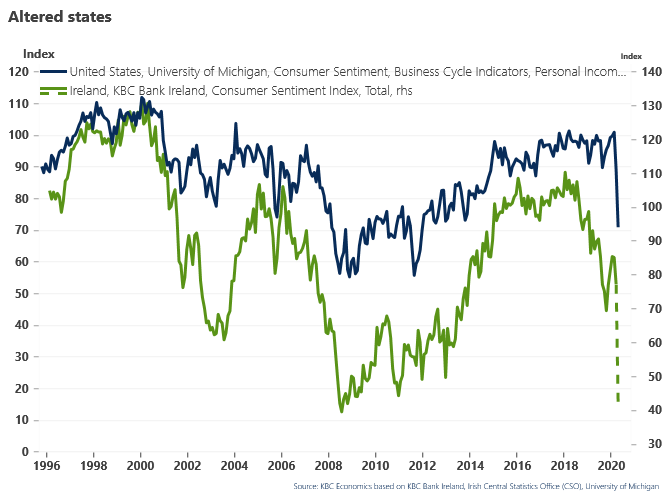 A further significant element cushioning the hit to Sentiment in early April in the US may be the much larger scale and prominence attached to the economic policy response now in train in the ‘States. The US government has already enacted a fiscal stimulus of around 10% of GDP and a further stimulus  of between 5 and 10% of GDP is being discussed. In addition, the US Federal Reserve has cut policy rates aggressively, expanded its balance sheet more aggressively than the ECB and initiated a wide range of special support schemes.

While early indications suggest the Coronavirus will have a marked economic impact worldwide, a comparison of April sentiment readings might suggest the risk of a greater precautionary pull-back in Irish consumer spending in Ireland than in the US.  A significant ‘fear factor’ influencing the spending decisions of Irish households would likely be amplified markedly by any suggestions that recovery from the Coronavirus would prompt a return to austerity to reverse an inevitable deterioration in the public finances. Signalling forcefully that this would not be the case must be a key element in any policy focussed on an economic turnaround.

The details of the April consumer sentiment survey further emphasise that substantial policy support will be required to return consumer spending to a healthy path. For much of the past couple of years a softening tone in the sentiment survey has been driven by risks around a hard Brexit that outweighed the reality of a strong but not universally bountiful economic upswing.

As a result, the main driver of the downswing up to last month was a weakening in the forward-looking expectations elements of the index. Although the current conditions elements also declined since early 2016, as the diagram below illustrates, until April the drop in current conditions was much more constrained than in expectations. Now a much weaker reality and further downside risks are feeding off each other and underline the importance of policy action to break a threatened vicious circle. 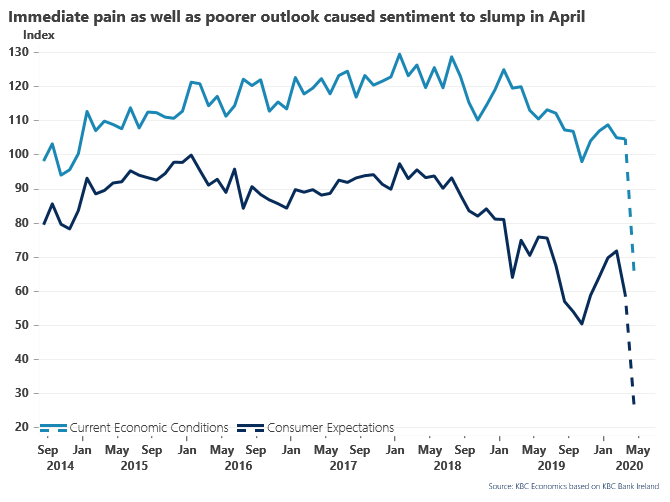 Unusually, but unsurprisingly, the sharp drop in Irish consumer sentiment in April reflects the sharp and sudden change to the financial circumstances of many Irish households as well as the broader weakening of the outlook for activity, employment and incomes. Expectations are still slightly above the low-point of the previous crisis, presumably reflecting a judgement that the current crisis is finite in nature. However, the April reading for current conditions is the lowest in the series twenty four year history of the sentiment survey, an outcome that speaks of the scale and spread of the immediate hit to incomes as well as the curbs on spending.

The details of the sentiment survey underline the scale of difficulties now being felt; in terms of the Irish economy, nine out ten consumers  envisage weaker conditions through the next twelve months while three out of four see higher unemployment over that same period. Only one in twenty see their financial circumstances on an improving trend at present compared to one in five at the start of the year and one in two expect a further weakening over the next twelve months.

The April consumer sentiment reading gives a clear sense of the speed and size of the downswing in Irish economic activity. As the diagram below illustrates, on the basis of past relationships, the April confidence data point towards a significantly negative trend in household spending through the remainder of the year. By extension, the details of the April confidence data coupled with the consequences for behaviour of a recent and painful memory of the previous crisis mean Irish consumer sentiment and spending are unlikely to return to healthier trajectories without a substantial policy stimulus. 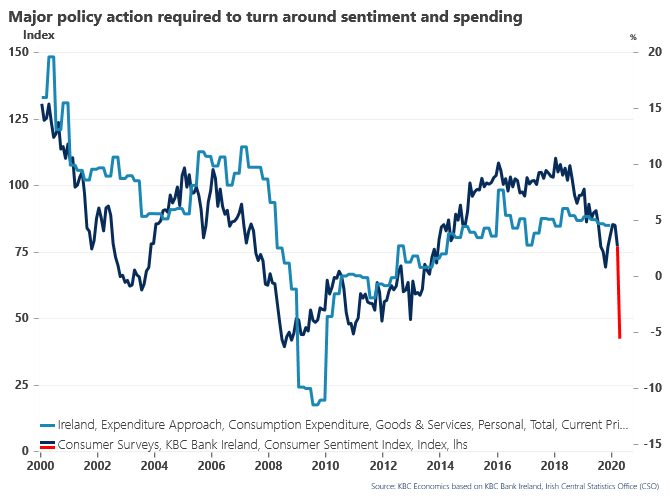 Indeed, there may be risks that misplaced concerns about the public finances could push confidence and consumer spending onto even weaker paths through the remainder of the year. As the comparison with the US sentiment reading may hint, the capacity of Irish consumer spending to move back to a positive path may  depend critically on the scale, scope and speed of policy actions to re-start economic activity and employment growth.  Such actions need to be sufficiently strong in terms of signal as well as size and speed if they are to credibly boost confidence and thereby avoid or at least minimise any permanent losses to the Irish economy from Covid-19.