Irish consumer sentiment deteriorated markedly in December.  Sharply increased uncertainty about the future of the Euro, another severe Budget and the threat of a sustained squeeze on household spending power in coming years combined to produce a notably darker mood among Irish consumers last month.

The KBC Bank Ireland/ESRI Consumer Sentiment Index plummeted to 49.2 from 60.1 in November.  This was the largest monthly drop since August 2001.  The outsized decline in December came shortly after an abnormally large rise in the index in October.  Such sharp gyrations are extremely unusual in the sentiment survey.  The average monthly change in the Index is around 0.3 points.  Indeed, the sixteen year history of the sentiment survey suggests we should only see monthly changes of 10 points or more about once every eighteen months.  So, two extremely large and opposite changes within three months suggests something out of the ordinary is happening.

Possible explanations for the recent volatility in the sentiment survey fall into two broad categories.  First of all, these results could simply reflect sampling issues that generate ‘statistical noise’ in the Index that don’t stem from real changes in the circumstances of Irish consumers.  We have examined the processes involved in the production of the Index and can’t find any obvious ‘technical’ reason for the volatility of recent months.  Although we can’t definitively rule out sampling problems, they don’t seem to offer an obvious explanation of the sharp swings in sentiment seen of late.

Another possible explanation is that the volatility in the sentiment survey of late largely reflects the exceptional degree of uncertainty that Irish consumers now face.  Of its nature, a sentiment survey could be prone to large moves in these circumstances.  A relatively large number of respondents might shift towards a more negative viewpoint in response to highly publicised negative developments as was the case in December.  Similarly, as happened in October, even a small glimmer of hope following a long period of economic weakness may prompt a switch towards a more positive viewpoint.  That said, the sentiment survey has been relatively stable through what has been a fairly momentous sixteen years for the Irish economy in the sense that the underlying trend hasn’t been overwhelmed by ‘noise’ in the form of large swings in the monthly data.  Judged against this backdrop, it may simply be the case that circumstances are quite exceptional at present and sentiment has become more volatile as a result.

The most obvious manifestation of notably increased uncertainty of late concerns the Euro where the possibility of a looming break-up became the subject of frenzied discussion in financial markets and the media in late 2011.  Both the concerns highlighted in the run-up to the EU crisis summit of December 8/9 and the disappointing outcome to that summit might have been expected to hit Irish consumer confidence hard last month.  While the December survey outturn is consistent with a significant negative impact from Euro related developments, it seems that other aspects of the Euro crisis supported rather than soured consumer sentiment in the previous couple of months.  One obvious example of a positive effect is the ECB’s decision to cut rates in both November and December.  The looming prospect of cheaper borrowing costs undoubtedly boosted Irish consumer sentiment in October.  In addition, the realisation that Ireland’s current economic woes reflect at least in part a broader European malaise rather than uniquely domestic failings could also have been interpreted positively by Irish consumers during the Autumn.  For these reasons, it appears that the Euro crisis pushed Irish consumer sentiment in both directions in recent months.  As such, Euro related developments contributed significantly to the extreme volatility in the sentiment index of late. 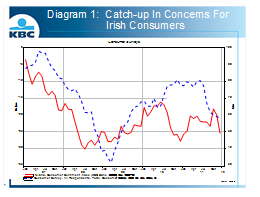 The sharp drop in Irish consumer sentiment in December has to be seen in the context of a clear improvement in corresponding US indicators and a comparatively modest decline in sentiment across the Euro area last month.  As Diagram 1 indicates, there may be an element of catch-up in the deterioration in the Irish Index compared to its European counterparts last month.

Diagram 1 also hints that some important domestic economic developments likely also contributed to increased uncertainty and greater ‘mood swings’ among Irish consumers of late.  In the autumn, positive growth data and supportive assessments by the Troika seemed to encourage a view that the Irish economy was set on a clearly improving path.

Unfortunately, a poorer global backdrop and the more recent weakening in a range of domestic indicators meant the Irish economy not only ended 2011 on a clearly weaker trajectory but expectations for a significantly stronger 2012 were all but extinguished.  This turnaround could also have played an important role in recent volatility in the sentiment survey.  In fact, the recent change in consumer sentiment in relation to the economic outlook is very similar to a very dramatic swing in the views of Irish companies in relation to the ‘macro’ outlook between the third and fourth quarters of 2011 (as signalled in the Autumn and Winter business sentiment survey compiled by KBC Bank Ireland and Chartered Accountants Ireland).

Sharply increased uncertainty of late and growing downside risks to the economic outlook seem to offer at least a partial explanation of the volatility seen in the two macroeconomic elements of the consumer sentiment survey of late and the particularly weak reading reported for December.  However, a marked deterioration in consumers’ assessment of their own financial situation last month probably owes more to concerns about the negative impact of budgetary adjustments on the living standards of the average Irish household.

Again, there may have been an element of excessive optimism during the autumn that a smaller adjustment in Budget 2012 than in Budget 2011 would translate into a budget package that might not markedly alter household finances.  However, the retrenchment sought at some 2 ½ % of GDP was still formidable even if less than the 4% of GDP implemented a year earlier.  As a result, Budget 2012 had a further large negative impact on household finances through a wide range of tax increases, additional charges and cuts in support to already financially stretched households.

The harsh reality of the measures introduced in Budget 2012 was compounded by concerns about the scale of household charges and other adjustments that still lie ahead in at least the next three budgets.  Most media commentary on Budget 2012 tended to emphasise the degree of adjustment yet to come and the wide range of painful measures that might be needed to achieve the targets for 2015.  So, while Irish consumers may be somewhat uncertain about the precise trajectory of their future spending power, there seems a fairly strong sense that it will decline.  The December sentiment survey seems to reflect an expectation that living standards will continue to shrink for the foreseeable future as cutbacks in public spending, further tax increases and additional charges for public services are implemented.  This judgement could well be the key driver of the deterioration in consumer sentiment in December.

Is The Decline In Sentiment Overdone?

We previously cautioned that the rise in consumer sentiment in October looked somewhat excessive.  We think the drop in the Index in December may also be exaggerated.  For this reason, we would not be completely surprised to see some improvement in the sentiment survey in early 2011 as long as there is no further deterioration in the global economic environment.  Indeed, January data could see a decent bounce amplified by the impact of aggressive price discounting in post-Christmas sales on the buying climate component of the survey.

To summarise, the sharp drop in sentiment seen in December and the unusual volatility of the Index in recent months require some explanation.  While we can’t entirely rule out sampling issues as an explanation for the recent volatility in the sentiment index, we think the exceptional uncertainty surrounding current economic circumstances may be responsible for a good deal of the gyrations we have seen in the Index.  As a result, we think some smoothing process such as that provided by a 3 month moving average of the Index may provide a better guide as to the underlying trend in consumer sentiment at present.  As Diagram 2 indicates, the three month moving average measure substantially reduces the volatility seen in the ‘raw’ series of late.  This sort of adjustment also means the decline in sentiment in December appears altogether less pronounced. 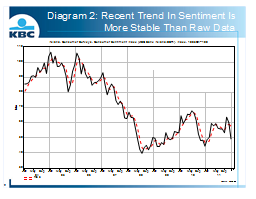 Given the scale of uncertainty about the general economic climate at present and our own difficulties in fully explaining the increased volatility in the consumer sentiment index of late, it could be at least a few more months before the outlook for consumer sentiment and the broader Irish economy becomes clear.  Until then, the main messages from the December survey are that Irish consumers are very nervous at present and gloomy about the outlook for the Irish economy and their own personal finances.