• Notable differences evident between consumer sentiment in Ireland, US and Greece.

Irish consumer sentiment was effectively unchanged in October as marginally more positive views on the outlook for the Irish economy were largely offset by continuing concerns about household finances. The KBC Bank Ireland/ESRI Consumer Sentiment Index rose fractionally to 60.9 from 60.2 in September but in the context of a near 10 point drop in the index last month, this shouldn’t be regarded as a significant change. The underlying trend, as signalled by the three month moving average, declined to 63.7 from its previous reading of 66.0. This largely reflects the outsized drop reported in September. It also implies that there has been some deterioration in Irish consumer sentiment in the past couple of months even if the October report suggests confidence has stabilised of late.

The marginal increase in the Irish Consumer Sentiment Index in October contrasted with a strong rise in the comparable indicator of US consumer sentiment compiled by the University of Michigan. The mood of US consumers improved to its best level in five years in October. This largely reflected expectations of stronger economic prospects that fuelled the anticipation of increased household incomes in the year ahead. This implies that consumers hold a strong view that current uncertainty related to the upcoming presidential election and the US ‘fiscal cliff ’ will be resolved in a manner that does not inflict any lasting damage on household spending power. As such, consumers in the States appear to take a notably more positive view of the possible impact of looming changes in Budget policy on their personal finances than do their Irish counterparts. This could be because the recent experience of US households has been of supportive budget policy whereas that of Irish households has been altogether more painful. In contrast to the situation in the US, consumer confidence in the Eurozone remained effectively unchanged at fairly weak levels in October while UK consumers reported a relatively modest weakening in sentiment that resulted in confidence falling to a six month low. So, it seems that there is a notably greater coincidence of concerns among households on this side of the Atlantic at present. 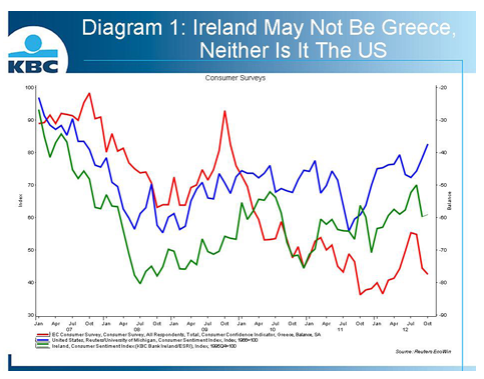 Diagram 1 above compares developments in consumer sentiment in Ireland, Greece and the US since the crisis began in 2007. As the diagram shows, the mood of Irish consumers deteriorated faster and further than that of their US or Greek counterparts up to mid 2008. There has been a very limited and somewhat erratic improvement in mood of Irish consumers in the interim that was interrupted by the very poor September 2012 reading. However, Greek consumer confidence only came under significant downward pressure from mid 2009 and a brief improvement earlier this year has recently been reversed as the economic outlook appeared ever more daunting. In contrast in the US, budget policy has been more supportive of household spending power and a progressive if fairly lacklustre economic recovery appears to be underway in the States. Against this rather different backdrop, US consumers reported a relatively modest decline in sentiment up to 2011 and a comparatively strong improvement in the past year.

These comparisons reveal important differences in the circumstances of consumers in different countries. They also serve to emphasise the relatively fragile nature of Irish consumer sentiment at present. The October 2012 reading of 60.9 is slightly above the average of the past five years (55.6) but now stands marginally lower than the average thus far in 2012 of 61.9. While sentiment has moved significantly away from its low point, the mood of Irish consumers is still relatively weak and remains vulnerable to unexpected bad news.

The relatively small change in Irish consumer sentiment in October compared to September might be interpreted as suggesting that (i) the sharp decline recorded in the September report reflected a real deterioration in the mood of Irish consumers rather than a statistical aberration and (ii) sentiment appears to have stabilised of late rather than remaining in freefall. In turn, this may hint that Irish consumers feel they have braced themselves for the probable scale and range of painful adjustments that Budget 2013 may inflict upon their household spending power.

The relative stability of the Consumer Sentiment Index in October may also reflect a slightly less threatening newsflow in terms of possible Budget measures mooted during the survey period. This is not to say that Irish consumers have become less worried of late. Indeed, the two elements of the sentiment survey concerned with household finances weakened marginally further in October. While concerns relating to Budget 2013 have been the key driver of poorer Irish consumer sentiment of late, they are not the only threats to household spending power. The survey period saw the announcement of imminent increases in electricity and gas bills while the Central Bank argued that domestic wages need to fall further to assist the competitiveness of the Irish economy. In these circumstances, it is hardly surprising that consumers saw little prospect of any early easing in pressure on spending power.

While consumers were slightly more pessimistic about their own household finances in October, their views on the outlook for the Irish economy improved marginally. A range of indicators released during the survey period pointed towards somewhat healthier activity. There were a number of encouraging external reports on Ireland’s economic progress and there were also tentative signs of stabilisation in the housing market in the form of a second consecutive month of rising house prices. That said, the economic news was not unambiguously good. Doubts increased about the scale and speed of assistance likely to be offered in respect of Ireland’s banking related debt. In addition, global economic prospects remain a matter of significant concern. So, it is not surprising that the improvement in Irish consumers views on the general economic outlook was relatively modest. Unusually, in the light of the marginally improved outlook for activity, consumers took a slightly more negative view in regard to the outlook for employment and unemployment. This likely stems from CSO data that showed a drop in numbers at work in the Irish economy during the spring quarter and highlighted the increasing incidence of long term unemployment. Together with some high profile job loss announcements during the survey period, this more than offset any impact from some promising new job announcements. Again, it should be emphasised that the change in this element of the survey was only marginally negative in October, an outturn that probably reflects significant two way newsflow in this area during the survey period.

Spending Not As Weak As Sentiment Of Late

The October survey also saw a somewhat surprising improvement in the buying climate following a significant weakening in this element in September. This may have been driven by a wide range of mid-season sales promotions that appeal to those group of Irish consumers whose hesitant spending patterns owe more to concerns about the future than to current cash constraints. To some extent, the improvement in the spending climate chimes with signs of stronger retail sales of late. As diagram 2 shows, recent retail data have been somewhat firmer than the sentiment survey would suggest. However, in spite of the modest improvement seen this month, consumers’ assessment of the buying climate was notably weaker in the September/October period than in the three preceding months. For this reason, we think the consumer sentiment survey points to a relatively tough Christmas spending period for consumers and retailers alike. 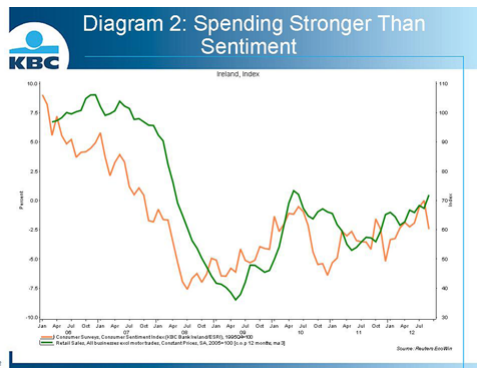