Irish consumer sentiment fell for a fourth month in a row in October (the first time this has happened since late 2012). There is little doubt that the ongoing decline in consumer confidence  is largely as a result of continuing nervousness around Brexit.

As the October survey was carried out slightly later than normal, running from the 10th to the 18th of the month, the results probably reflect, first and foremost, Irish consumers’ concerns around seemingly intractable political problems in the UK that threatened to prevent a deal being agreed. However, the weaker October reading may also hint at a measure of disappointment with Budget 2020. Whether this relates to the specific measures taken or the broader sense of how much Brexit might limit the scope for even modest adjustments to welfare and income taxes isn’t entirely clear.

Consumer concerns not unique to Ireland but more pronounced here

The KBC Bank consumer sentiment index fell to 69.5 in October from 75.3 in September, leading to the weakest survey reading since August 2013 (66.8).  As the October 2019 index stands well below the long term average of the sentiment survey (which stands at 88), both the current level of the sentiment index and the recent trend point towards an Irish consumer who is anxious rather than optimistic.

Some of the softening in the Irish sentiment reading for October may reflect a broadly based element of concern that saw confidence metrics for the Euro area and the UK both weaken last month. As the closest comparable indicator for the US improved modestly, this may suggest Brexit related nervousness struck a chord in countries most likely to be negatively affected if a withdrawal deal could not be finalised. However, as the diagram below indicate, the recent weakening in Irish consumer sentiment is much more pronounced than elsewhere. 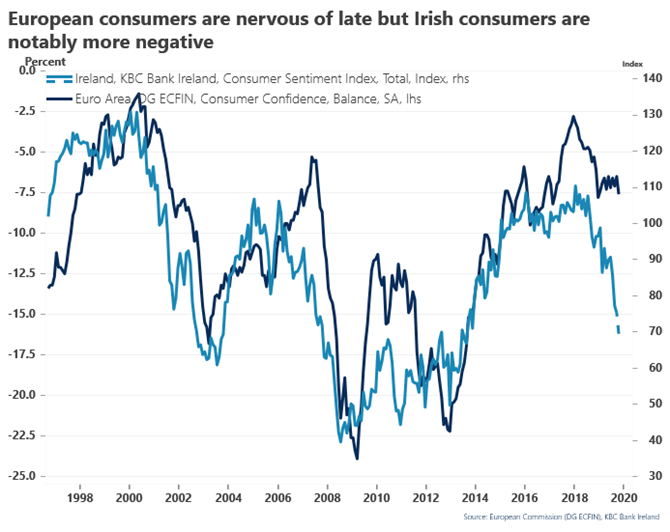 Four of the five components of the Irish consumer sentiment index weakened in October, the exception being an effectively unchanged assessment of the jobs market. Unusually, the most pronounced weakness in the October results was in those areas of the survey focussed on household finances and spending rather than broader macroeconomic conditions. For most of the past three years, the drop in Irish consumer confidence has been led by sharp declines in ‘macro’ elements of the sentiment survey. This reflects both the nature of Brexit risks and the reality of improving conditions for many households as recovery took hold in the Irish economy.

Budget 2020 may have raised another channel of Brexit concerns

It may be that the lack of broadly based adjustments to welfare rates and income taxes in budget 2020 forcefully brought home both how wide the channels through which Brexit difficulties might be felt and how significant they might be. So, even if consumers avoid major ‘direct hits’ to their income or employment from Brexit, their household finances could be adversely affected through taxation and/or welfare changes because of the impact of Brexit on the Public finances.

A notable weakening of household finances and spending plans in the October survey could also be simply an indication of ongoing pressure on many households’ finances that mean even modest ‘giveaways’ are critical to making ends meet. This interpretation would be consistent with  responses to a special question asked in the September survey that found  72% of consumers felt Budget day adjustments to tax and social welfare rates were important to their personal financial circumstances.

The improved prospect of late that a ‘no deal’ Brexit can be avoided may boost the November Sentiment reading. However, with political uncertainty in the UK elevated and an increasing likelihood that the permanent agreement between the UK and EU will entail a greater degree of dislocation, it seems likely that Brexit will cast a shadow on Irish consumer sentiment for some time to come..

What sort of impact is poor sentiment having on household spending?

The key question is whether that ‘embedded uncertainty’ will continue to weigh on Irish consumer spending in the manner that it has since the Brexit referendum. Over the three years between mid-2016 and mid-2019, growth in household spending lagged household income by just over 1% per annum whereas, prior to the referendum, spending typically outpaced income growth by a broadly similar amount.

In the same vein,  while Irish  retail sales in September 2019 , the recent trend is not entirely inconsistent with recent sentiment data.  The diagram below shows that the volume of retail sales (excluding cars) rose by a robust 4.2% y/y  in the third quarter. However, the  value of sales (excluding cars)  rose by a more muted 1.8%. When we adjust the latter to take account of population growth, we find the average retail spend per person  increased by just 0.5% y/y in the third quarter and if we use overall retail sales (including cars) the year on year change in retail spend per person turns negative , dropping 2.2% y/y.

Whereas risks are large and one-sided from a consumer perspective, this has to be weighed against the current reality of healthy gains in employment and improving incomes. So, spending hasn’t stopped but it is notably slower than it might otherwise be. Understandably, when sentiment sours, spending on big ticket items such as cars and property is likely to be notably more affected than day to day outlays. Interestingly, while Brexit may be making Irish consumers more cautious, it should also be noted that it is also increasing their spending power as weakness in Sterling and more intense retailing competition have resulted in retail prices in Q3 2019 being 2.3% lower than a year earlier. However, unless Sterling suffers persistent declines, the boost to spending power may wane while consumers are fearful that Brexit problems will intensify. 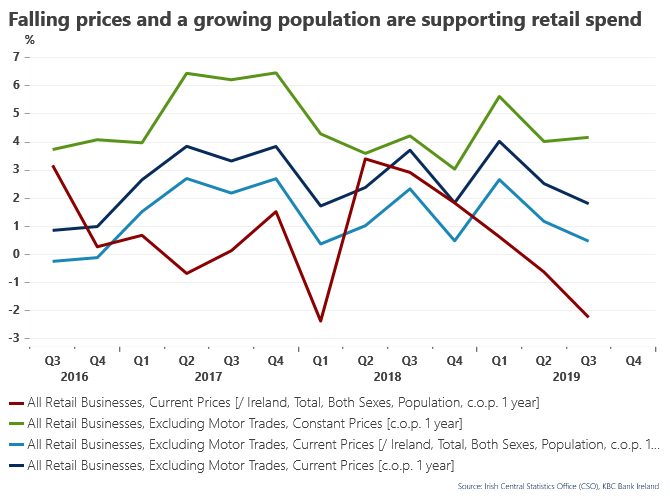