Domestic economic warnings may also be unnerving some consumers

Irish consumers report improving household finances through the past year, suggesting risks rather than reality of poorer circumstances now weighing on confidence

Irish consumer sentiment weakened notably in July as the notably increased risk of a no deal Brexit coupled with some threatening domestic commentary on Irish economic prospects prompted a notably gloomier assessment of the ‘macro’ outlook and household finances on the part of consumers.

As similar confidence measures improved in the US, the Euro area and even the UK in July, it appears that the concerns evident in the Irish consumer sentiment index in July were significantly influenced by domestic developments and fears in spite of a still largely favourable flow of Irish economic indicators.

The KBC Bank Irish consumer sentiment index fell to 85.5 in July from 90.5 in June. The July reading was the weakest since November 2014 and marks a disappointing result after modest gains through the two previous months appeared to hint that confidence might be set on an improving trend.

While global economic concerns have increased in recent weeks, they didn’t weigh on the mood of consumers in a range of countries in July. In the US, a still healthy jobs market appears to have offset concerns about a trade warwith China, leaving consumer sentiment strong and reasonably stable (although trade tensions have ramped up further since the July sentiment reading for the US was taken). In the Euro area, a similarly supportive jobs market appears to be outweighing worries about softer economic trends of late (although again we wouldn’t be surprised to see softer confidence in upcoming readings).

In the UK, it may be that the tougher line on Brexit and promises of increased public spending by both candidates for the Tory leadership fuelled a sense of a more decisive government that prompted a perhaps surprising rise in confidence on the part of British consumers in July.

While the July confidence reading for the UK hints at a ‘Boris bounce’, it appears Irish consumer sentiment suffered a ‘Boris bump’. Our sense is that the combination of a tougher line and no specific solutions espoused by Boris Johnson (the overwhelming favourite and most of his opponents) in the race to become leader of the Conservative party and Prime Minister of the UK was the key driver of the drop in Irish consumer sentiment in July.

We previously noted that Irish consumers appear to be markedly more sensitive to emerging downside risks around Brexit than their UK counterparts. This may be the result of a range of influences.

In part, it may reflect the fact that Brexit is not of Irish consumers making while some of those UK consumers who voted for Brexit may believe it will have positive economic effects or may feel adverse economic effects may be outweighed by other consequences.

Of course, the response of Irish consumer sentiment to the re-emergence of ‘Hard Brexit risks is also heavily influenced by the painful experience of the recent economic crisis. In contrast, some UK consumers may be swayed by sustained employment gains which, at least to this point, have been very much at odds with the message of earlier warnings of a dramatic deterioration in living circumstances were the UK to vote to leave the EU.

The scale of the recent crash in Ireland has likely scarred consumer thinking and made consumers inclined to focus more closely on downside risks to incomes. As the graph below illustrates, the spending power of the average person (as measured by aggregate household disposable income per capita adjusted for inflation) is now stronger in Ireland than that in the UK relative to its pre-crisis 2007 level.

It is noteworthy that a substantial part of that relative improvement in Irish household incomes has occurred in the period since the UK’s Brexit referendum. However, through this same period,  Irish consumers have become increasingly concerned about the risk that Brexit could prompt a renewed and substantial deterioration in their economic circumstances. This likely reflects Irish consumers’ particular sensitivity to the pronounced variability in Irish spending power evident in the diagram below which contrasts to notably more modest if extended weakness in UK incomes. 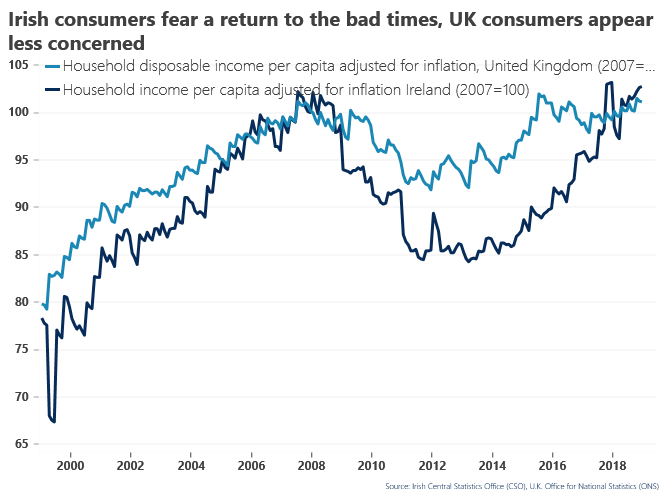 Finally, for many UK consumers, the particular economic and wider fallout  associated with the border that a ‘crash out’ Brexit raises do not resonate to anything like the same degree that they do in Ireland. These considerations are likely to make Irish consumers altogether more aware of the risks and reality of Brexit than many of their UK counterparts. As a result, the divergence in the July sentiment readings on either side of the Irish sea is not entirely surprising.

The particular weakness seen in the ‘macro’ elements of the Irish consumer sentiment survey is largely explained by the nature of Brexit-related risks, as the twelve month outlook for the Irish economy weakened materially on a clearly increased threat that the UK could crash out of the EU within that timeframe.

Beyond Brexit, it also the case that the July survey period saw some notable if disparate domestic warnings on the Irish economy that ranged from overheating risks to the inevitability of recession. In part, such commentary may be an almost inevitable consequence of a sense that complacency contributed materially to the recent crisis. However, it is not entirely clear how some of these very general warnings serve to improve the current trajectory of the Irish economy, particularly in circumstances where consumers are already struggling to make sense of their economic prospects.

Almost mechanically, the risks of weaker economic conditions translated into a more cautious outlook for jobs in the July sentiment survey. However, the extent of this pullback may have been tempered by evidence of a  very healthy jobs market in early 2019 in the shape of strong employment gains in official data released during the survey period.

The more threatening outlook for the broad Irish economy saw Irish consumers downgrade their expectations for their own personal finances in the July survey. Just 16% of consumers expect their household finances to improve in the next twelve months whereas 21% think their financial circumstances will worsen. The expectation of very limited gains in spending power and increased caution associated with increased downside risks also prompted a marginal pullback in spending plans.

The only area of the sentiment survey to see an improvement in July relative to June was consumers’ assessments of how their financial circumstances had evolved through the past twelve months. This  largely reflected fewer consumers indicating their household finances had weakened of late.  A modest gain in spending power through the past year suggests Irish consumer sentiment is being restrained by the risks of a Brexit-related downturn rather than the reality of weak income growth at present. In turn, that suggests consumer spending should continue to increase even if nervousness is likely to significantly restrain the scale of that increase.