Irish consumer sentiment weakened notably in March as increased uncertainty internationally and domestically prompted a marked downgrading of the economic outlook and a corresponding pullback in spending plans. At current levels, the sentiment survey is still pointing to a broadly positive assessment of Irish economic prospects but the drop last month suggests consumers are increasingly conscious of downside risks to the recovery. The March results suggest the ‘fear factor’ remains an issue for many Irish consumers.

The KBC Bank Ireland/ESRI consumer sentiment index fell from 105.8 to 100.6 in March. This was the largest monthly decline since October 2014 and broght the index to its lowest level in six months. The three month moving average of the sentiment series fell for the first time since September, confirming a significant change in the mood of Irish consumers last month.

As the March survey still shows positive balances for all the five main elements, it remains the case that Irish consumers are generally confident about their economic circumstances. However, the scale of the pullback in sentiment in March again underlines how tentative the improvement in these circumstances is for many consumers.

The weakening in the Irish sentiment reading in March was part of a broader deterioration in similar confidence surveys in other countries which we think may be worth considering before we examine the details of the Irish survey. As the diagram below shows, comparable indicators for the US, the Eurozone and the UK also weakened in March. However, the diagram also shows that sentiment has been on a healthier trajectory in Ireland than elsewhere for most of the past twelve months. 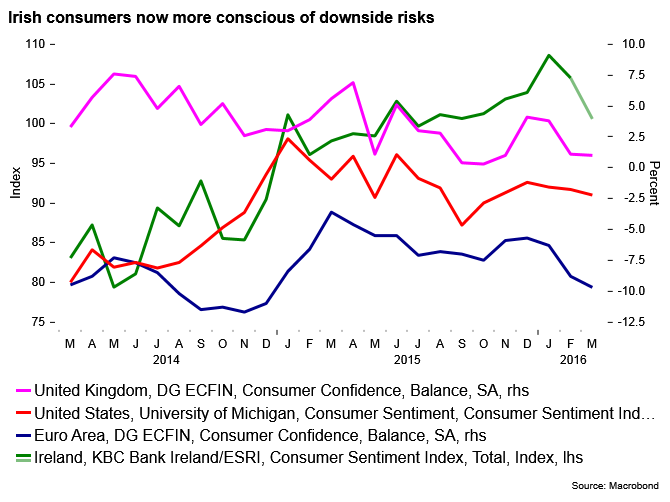 While the decline in US consumer sentiment was relatively modest, it has to be seen in the context of a recovery that has cut unemployment to 5% of the workforce and also seen significant gains for consumers from falling oil prices and rising house prices. However, it appears that the absence of a marked pick-up in wages and fragile sentiment on financial markets have translated into a more apprehensive American consumer.

An altogether more tentative economic upswing in the Euro area together with increasing concerns about migration and terrorism (even though the survey was conducted before the most recent atrocities in Brussels) has left many European consumers more anxious about the future. As the diagram shows, confidence has been on a sharply weakening trend in the Euro area for the past few months, reflecting an altogether less certain economic and political environment.

UK consumers have also been reporting a gradual if uneven weakening in confidence through the past year. As in the US, a relatively low jobless rate has not translated into a stronger path for wages. In addition, consumers may be having difficulty weighing extreme and opposing claims about the implications of ‘Brexit’. In these circumstances, it is not entirely surprising that confidence has been trending lower.

Our judgement is that the weakening in Irish consumer sentiment in March has something in common with the concerns felt by their counterparts in other countries. The weakest part of the Irish survey in March was in relation to the economic outlook for the next twelve months. The monthly decline in this element of the survey was the sharpest since November 2014.

There is little question that uncertainty about the global economy served to counter what continued to be a strong sequence of domestic economic data through the survey period, including  healthy jobs numbers and notably better than expected GDP figures for end-2015. Our sense is that Irish consumers felt the broader economic news flow of late implied that future readings of these domestic indicators might not be so robust.

We think three distinct considerations contributed to the marked downgrading of the economic outlook in the March survey. The first of these is a general concern about the health of the world economy, particularly in relation to the threat of a sharp deterioration in the Chinese economy and its impact on global economic and financial conditions. A second area of unease likely stems from notably greater coverage of the looming ‘Brexit ‘ vote in the UK and  the heightened focus of late on associated worst case scenario risks to the Irish economy.  Finally, the darker mood of Irish consumers last month likely reflects the prospect of a prolonged period of domestic political uncertainty.

The March survey clearly reveals increased concerns about Irish economic prospects but it must be emphasised that it does not signal a collapse in confidence. It remains the case that notably more consumers still expect the Irish economy to improve (46% of responses ) rather than deteriorate (15% of responses) in the next twelve months.

This is largely a reflection of fewer positive views rather than an increase in particularly gloomy assessments. The number expecting weaker economic conditions has changed little of late, rising only modestly from a low-point of 11% of responses in November. In contrast, the number of consumers expecting further Irish economic gains has slipped significantly from 61% of responses as recently as January. The March survey hints that the persistence of the Irish economic upswing looks a little less certain but the details also argue that a dramatic downturn is still regarded as remote.

The sense that last month’s sentiment reading reflects increased fears rather than a more fundamental re-assessment of Irish consumers’ prospects is suggested by a very limited weakening in three of the five main elements of the survey. The notably poorer view on the general economic outlook prompted only a fractional change in thinking on job prospects. In this context, the survey period saw official data pointing to on-going and broadly based increases in employment and a steady stream of new job announcements. Concrete evidence in this form provided a significant counterweight to growing, if less clearly defined unease about the economic climate.

The March sentiment survey saw a relatively modest mark-down of consumers views on their own household finances. As a result, it remains the case that marginally more Irish consumers hold positive rather than negative views of their personal financial circumstances. As increased economic unease reflects risks rather than realities, the March survey saw only a slight drop in the number of consumers expecting an improvement in their household purchasing power to 28% from 31% previously, while there was a statistically insignificant drop in the number anticipating poorer household finances from 15% to 14% of respondents.

Aside from the economic outlook there was one other element of the survey that saw a large decline in March. Consumers’ spending plans, as expressed by their answers to the question asking whether now is a good time to buy big ticket items, recorded the largest monthly decline since October 2014. It should be noted that this element of the survey can be volatile on a monthly basis and that the balance of responses remains positive. However, the weakening in this part of the survey is consistent with a precautionary pull-back in spending plans in response to the threat of more difficult economic times ahead.

We don’t think the March sentiment survey points to a marked change in the outlook for Irish consumer spending which we still expect to increase at a broadly similar pace to last year. That said, these results suggest consumers are sensitive to the risk of more difficult economic times ahead and this may be reflected in a slightly more cautious approach to 'discretionary' spending in coming months.

In part, the concerns evident in the March sentiment reading reflect what is still a tentative and uneven recovery in Irish households spending power after a very painful adjustment through the recent crisis. This means many Irish consumers are poorly placed to handle any renewed economic weakness and, consequently, more focussed on such risks.

While such circumstances make Irish consumers particularly sensitive to risks to the economic outlook, the diagram above suggests they have weathered various global economic storms through the past year rather better than their counterparts elsewhere. Our judgement is that the clear decline in Irish consumer sentiment in March owes something to the general worries afflicting consumers around the globe at present. However, we think the key driver is the combination of two developments specifically relevant to Ireland in the shape of the threats posed by ‘Brexit’ and prolonged domestic political instability.

While the drop in sentiment in March might be regarded as no more than a wobble given that the details of the survey remain generally positive, it should also be taken as a warning given particular threats to the Irish economic outlook and the still strained financial circumstances of many households. The March results certainly suggest that Irish consumers are more conscious of downside risks to the recovery of late.