Modest monthly rise suggests confidence building gradually rather than any sea-change in thinking.

Irish consumer sentiment improved to its best levels in nine years in June. The increasing prospect of tax cuts and public spending increases in the upcoming Budget, together with talk of public sector pay increases, seem to have encouraged greater optimism about the outlook household spending power.

The June reading doesn’t represent a sea-change in consumer thinking. Nor at current levels does it suggest that unbounded optimism prevails among Irish consumers. However, the sentiment index does suggest consumers increasingly expect that things will get better for them as well as for the broader Irish economy over the next twelve months.

The KBC Bank/ESRI Consumer Sentiment Index rose to 102.8 in June from 98.5 in May bringing the index to its highest level since February 2006 (102.9).The monthly change is only the fourth highest in the past year. So, the change in consumer thinking in June is not exceptional. Instead, it seems to reflect a heightened sense of an emerging improvement in the conditions facing the average Irish consumer that has been building- albeit gradually and unevenly- for the past couple of years. 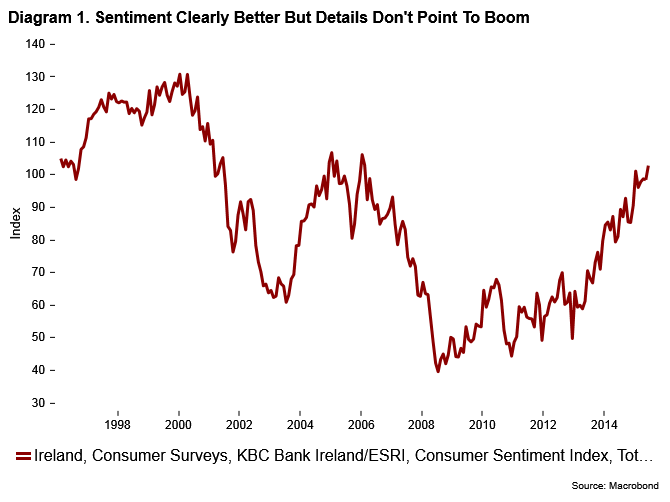 The most notable aspect of the June sentiment data is that the increase in the index was primarily driven by an improvement in consumers’ assessment of their personal finances and a related bounce in spending plans. All of the five main components of the survey were stronger than their May readings but the change was most pronounced in those elements related to household finances rather than the general economic environment.

The survey reported improvements in responses both in relation to how household finances had changed in the past year and how they are expected to evolve in the year ahead as well as a recovery in buying climate.  In each instance, the change was modest, emphasising that there has been no radical change in consumer thinking- just a small but significant nudge in a more favourable direction.

Our sense is that improved consumer sentiment towards household finances reflects a number of developments through the survey period. Probably the most important of these was increased discussion of the possibility of a generous budget in October. Strong exchequer returns hinted at scope for some stimulus, several government ministers talked up such a prospect and warnings against an excessively generous budget stance from the Irish Fiscal Advisory Council and the ESRI further heightened media coverage of a possible ‘giveaway budget’. As a result, it would seem Irish consumers see the era of austerity as over and are increasingly alert to the possibility that a period of payback may now be beginning.

Subdued inflation and the prospect of a sequence of increases in public sector pay might also have pushed sentiment higher. It is also possible that there has been some positive ‘wealth effect’ from rising residential property prices of late given Ireland’s relatively high home ownership rate and the intense pain caused by the collapse in prices through the downturn.  The evidence in recent official data of a pick-up in prices outside Dublin and some moderation in the capital might help in this regard. Expectations of some easing in borrowing costs for those on standard variable rate mortgages could also have contributed. As a result, quite a number of influences may have supported the improvement in sentiment in June.

It May Be Getting Better But It’s Far From Great

It should be emphasised that the June sentiment reading does not suggest Irish consumers are particularly upbeat about their personal financial circumstances. In May, 17% of respondents indicated their household finances had improved in the past twelve months while 33% reported a deterioration. For June, positive responses increased to 20% while negative responses dropped to 31%. So, while the June reading represents an improvement, it remains the case that notably more consumers reported tougher financial circumstances in the past year than experienced rising spending power.

Looking ahead, the May sentiment survey found that 23% of consumers anticipated better household finances in the following twelve months while a very similar 22% expected their financial situation to worsen. In June, this had altered to 25% positive responses and 19% negative responses. So, there is no sense in these responses that consumers anticipate a marked improvement in their financial condition any time soon.

It may be worth drawing out some implications of these results. The June survey suggests that 80% of Irish consumers haven’t seen an improvement in their household finances in the past year and 75% don’t expect an improvement in the year ahead. This suggests the emerging upturn in household spending power is narrowly based and may be quite fragile. These data certainly don’t paint a picture of an economy at risk of overheating.

While Ireland’s public finances require further improvement, the sentiment survey hints that there may also be an economic rationale to assist in a more broadly based improvement in household finances in Budget 2016. The difficulty is to devise measures that ensure that the fiscal position and the incomes and expectations of consumers all develop along sustainable trajectories.

The June survey period saw a number of strong data releases and several upbeat commentaries on the Irish economy. However, as we noted previously, the sentiment index already reflects an overwhelming sense that the broad economic outlook is very positive. Some 65% of those surveyed in June envisage a further improvement in the Irish economy in the next twelve months-up from 60% in May while the number expecting a weakening edged down from 10% to 9%. Similarly, in spite of very encouraging employment data, sentiment on the outlook for jobs improved only fractionally.

If Irish consumer confidence is to alter markedly in coming months, it is more likely to reflect changes in thinking on household finances rather than the broader economic environment. That said, the June results suggest some possibility of a notable change in sentiment if there were to be a catastrophic spill-over from events in Greece or major terrorism related events given how entrenched optimism about the ‘macro’ environment is at present.

The rise in Irish consumer sentiment in June was mirrored in a sharp rise in US consumer sentiment which jumped to the second highest reading since early 2007 (the highest was in January 2015). The rise in US sentiment was attributed to an improving economy and a stronger jobs market in particular. UK consumer confidence also recorded a significant improvement after some disappointing recent readings of late. British consumer confidence jumped to its highest level in fifteen years in June. In contrast, Euro area consumer confidence stabilised in June as thinking on the economic outlook worsened, perhaps surprisingly, given an early stage upswing, while the assessment of household finances improved. While gains in UK and US indicators hint at greater confidence among consumers in an economic upswing, mixed developments in sentiment metrics in other countries tend to suggest that domestic rather than global influences drove the change in Irish consumer sentiment in June.