Irish consumer sentiment climbed to a fifteen year high in January as increasing optimism about household finances more than outweighed a slightly more cautious view of Irish economic prospects. The KBC Bank Ireland/ESRI consumer sentiment index rose to 108.6 last month from 103.9 in December (which itself was a ten year high), taking it to its strongest level since February 2001.

The improvement in Irish consumer sentiment in January seems largely due to domestic developments as comparable confidence measures for many other countries posted slightly weaker readings last month, as diagram 1 below indicates. A decline in US consumer sentiment from 92.6 to 92.0 effectively signals an unchanged level of confidence in the United States but the survey noted some concerns about weaker economic prospects as well as the decline in stock markets. It also seems that US consumers are somewhat concerned about the failure of what is now a relatively long lived recovery to deliver a marked improvement in the circumstances of the average consumer. Euro area consumer confidence also weakened modestly in January (from -5.7 to – 6.3) but this marked a notable departure from signs of improving sentiment in the two preceding months. 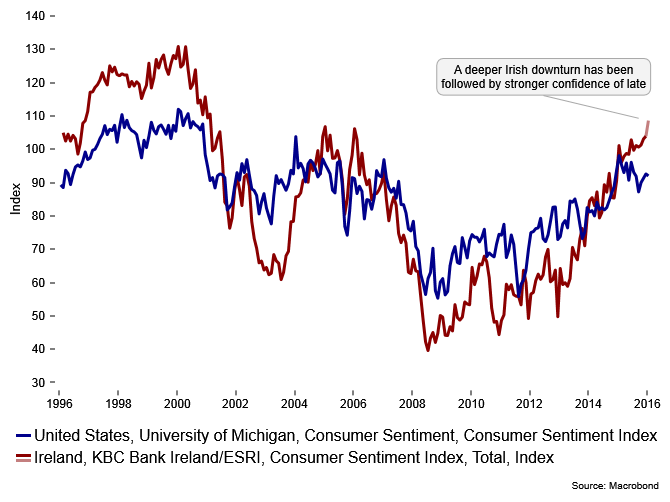 Details of the January Irish sentiment survey suggests that Irish consumers were not blind to worries about the health of the global economy.However, it appears these were more than offset by growing optimism in relation to their personal finances.  A clear sense of caution in relation to the broad economic environment  can be seen in a weakening in both elements of the survey that relate to ‘macro’ conditions compared to their December readings.

Views on prospects for the Irish economy declined only fractionally in January but, as we noted previously, readings in this element have not improved through the past six months in spite of a sequence of glowing reports on the Irish economy. Our judgement is that this reflects increased uncertainty in relation to the health of the world economy and particular nervousness in financial markets. In the latest survey period, extremely encouraging domestic economic news in the shape of strong end year exchequer data and positive trends in investment in the Irish economy contrasted with growing concerns about international prospects and very jittery financial markets.

Sharply contrasting signals in relation to  economic prospects  may be weighing on consumer thinking but there is still considerable confidence that 2016 will be a good one for the Irish economy. While marginally down on the corresponding data for December, the January survey still shows that 62% of consumers envisage a stronger Irish economy in the next twelve months and only 13% expect weaker conditions.

The most notable weakening in the survey between December and January was in relation to the outlook for jobs. Again, it should be emphasised that consumers remain reasonably positive, with 49% anticipating a fall in unemployment in the next twelve months compared to 21% who see some deterioration. However, this is clearly weaker than the 51:16 split in the December results.

We can’t fully explain why thinking on the Irish jobs market weakened last month. It could reflect concerns that the most threatening consequence of poorer global conditions would be felt in their impact on employment.  These results may also owe something to substantial job losses at C&C reported during the survey period. It might even be that some consumers feel quite removed from the sort of jobs market conditions implied by a range of recruitment surveys suggesting pay growth is picking up notably. Of course, it is also possible that this result could simply be a statistical blip. We will look to upcoming sentiment releases for some clarity in this regard.

Although those elements of the January survey that relate to ‘macro’ conditions were somewhat subdued, this was clearly outweighed by a notably more upbeat assessment of consumers’ own financial circumstances. The strongest element of the January results was in relation to purchasing intentions. This partly reflects seasonal influences such as the post-Christmas sales and January car buying and last month’s reading was fractionally down on that of twelve months earlier. However, these results appear consistent with reports of solid consumer spending over the holiday period and the particular strength in car sales in January (+33% on January 2014).

There may be some seasonal retracement of January’s pick-up in buying intentions and this might even prompt a weaker sentiment reading overall in February. However, the strength seen in other aspects of the survey related to personal finances seems to reflect growing confidence that household spending power is now set on an improving trajectory. For the first time since 2006, slightly more consumers reported an improvement rather than a deterioration in their personal finances  over the past year. Admittedly, the balance was relatively small (25% against 23%), which suggests the turn is still uneven. However, some sense of how much more broadly based the economic upswing has become of late is suggested by a comparison with the January 2015 survey when negative responses outnumbered positive responses by about 2 to 1 (39% against 19%).

Our sense is that these improved views of recent trends in personal finances reflect quite a range of influences. Clearly,  the broadening reach of the recovery has  been a key influence. Persistently low inflation has also had a significant impact. While much of the focus in this regard has been on the effects of lower oil prices, intense competition in retailing that has led to sustained and aggressive price discounting has also become a central element in the ‘new normal’ for Irish consumers. The spread of the recovery in the property market outside Dublin and, perhaps, the easing in house price inflation in the capital may also have played some role. Finally, and of considerable importance, the shift from a prolonged period of painful austerity to the promise of some fiscal payback has undoubtedly altered both the arithmetic and expectations of making ends meet for many Irish households.

Importantly, healthier household finances are more widely expected in 2016. 38% of consumers surveyed indicated that they expect their financial situation to improve in the next twelve months while just 11% felt they would experience a further deterioration. It is only in the past year that this balance has turned positive having weakened consistently since the summer of 2006. The effects of the turnaround in the fiscal stance on family finances is likely to be a key element in this regard as its reach is likely to be broader than that of other factors such as job gains and more clear-cut and persistent than say, the effects of lower oil prices.

While expectations for household finances are now at their strongest since the year 2000, this shouldn’t be read as implying a surge in Irish households’ spending power is now underway. In part, the improvement in this part of the survey simply highlights how difficult recent years have been for many Irish consumers. In any event, the survey doesn’t quantify how much consumers expect their circumstances to improve (most evidence suggests relatively modest gains on average) but it does highlight that, across a notably greater number of households, financial circumstances have stopped deteriorating and are now moving in a healthier direction.

The January survey was largely taken in the first half of the month and, as such, likely reflects the mood of the Irish consumer before the general election became a key focus for most households. That said,  the survey details hint why, ahead of the election, promises of tax cuts and/or increased public spending might seem  attractive. As noted above, even a marked recent improvement means that just 25% of Irish consumers feel that their financial circumstances improved through the past year.  For a significant number of households, the promise of fiscal measures that at least partly reverse the pain of the downturn may be seen as the main source of hope for the future. Even though there is little sense that Irish consumers have forgotten the lessons of the recent crisis, there is an understandable appetite for the promise of broadly felt progress in living standards in coming years.