Irish consumer sentiment rose significantly in September. The jump in the index to a six year high doesn’t seem to reflect any dramatic change in the economic environment facing Irish consumers during the past month. Instead, we think the much improved tone of the September index may reflect an element of ‘catch-up’ in sentiment in response to notably more favourable developments in relation to the jobs and property markets in Ireland of late. We would also caution that at least some portion of September’s pick-up in confidence could be vulnerable to concerns about the looming Budget or disappointing economic news.

The KBC Bank Ireland/ESRI Consumer Sentiment Index rose to 73.1 in September from 66.8 in August, bringing the index to its highest level since September 2007. As noted above, we think the jump in the index this month likely overstates the improvement in the environment facing Irish consumers of late but the underlying trend in sentiment as indicated by the three month moving average of the index also rose from 68.5 to 69.4. This increase points towards a continuing if modest improvement in the mood of Irish consumers through most of 2013. Indeed, the three month moving average has risen in each of the past five months and has only declined in two of the nine months of 2013.

Divergent Trends In Sentiment Across Other Economies

The sharp rise in Irish consumer sentiment in September comes against a backdrop of a modest improvement in the mood of Euro area consumers, a six year high in UK consumer confidence and some easing back from previously upbeat US consumer sentiment readings. The relatively modest pick-up in the Euro area confidence reflected a range of broadly positive readings that was offset by poorer sentiment in countries facing extremely difficult conditions such as Greece or in countries where recent trends have suggested the prospect of a notably poorer outlook such as Italy and the Netherlands. In the US, the sentiment measure closest in format to the Irish Consumer Sentiment Index is that published by the University of Michigan and it retreated to a five month low in September that likely reflects both some easing in the pace of jobs growth of late as well as emerging concerns that the US Government could face a shutdown or hit its debt ceiling in the next month or so. In the UK, the GFK measure of sentiment rose to its strongest level since November 2007, reflecting both increasing evidence of generally healthier economic conditions of late as well as the particular support offered by clear improvements in the jobs and housing market in the UK. So, it would seem that clearly identifiable domestic factors explain the notably different behaviour of consumer confidence measures across countries of late. It should also be noted that distinct trends appear to be emerging in sentiment on this side of the Atlantic, with Euro area confidence rising each month since December 2012 and the UK confidence up in each of the past five months.

As noted above, the broad trend in Irish consumer sentiment has been gradually upwards through much of 2013 but monthly readings have been more volatile than in most other countries. This tendency towards ‘jumpier’ sentiment readings in Ireland likely reflects a considerable degree of uncertainty on the part of the Irish consumer. In part, this is because key Irish economic indicators seem to be sending contradictory messages in regard to the true health of the Irish economy at present. In addition, Irish consumers continue to be burdened by the ongoing fiscal adjustment as well as high levels of personal debt and still worrisome levels of joblessness. With opinion shifting frequently as to how quickly these issues can be resolved, it is not entirely surprising that Irish consumer sentiment has been more ‘unsteady’ of late than elsewhere.

While it is easy to understand why Irish consumers would be more concerned about their current circumstances and cautious about their future than their counterparts in many other countries, we think the broad message coming from the trend in the Irish sentiment index thus far through 2013 is that the fears of Irish consumers are slowly easing, even if the current level of the sentiment index still suggests the ’feelbad’ factor hasn’t disappeared. With strong forces acting in opposing directions and increasing and waning in their relative importance from month to month, we think it is almost inevitable that measures of sentiment will be prone to occasional large swings such as that seen in the September data. Unfortunately, moves of this nature are also prone to at least a partial correction in subsequent readings. If budget concerns come to the fore in early September or Irish consumers take a dim view of recent lacklustre second quarter GDP data, there may be some downside risks to the October survey results.

Unusually, the September sentiment results show month on month gains in each of the five main elements of the survey. The largest change from the August survey was in relation to the twelve month outlook for the Irish economy and it was notable that this predominantly reflected an increase in positive views (from 25% to 37% of respondents) rather than a decline in negative views (from 40% to 33%). This is the first time more consumers are positive than negative about the economic outlook since February 2006 and the September reading also showed the highest number of positive responses since January 2005. In many respects, this month’s reading underlines how weak economic conditions have been in recent years and how deeply entrenched negative sentiment has been as a result. As a result, the September reading might be viewed as pointing towards expectations of a ‘normalisation’ of Irish economic conditions in the next year or so. However, with only a slightly positive balance and one in three consumers still expecting a further deterioration in the next twelve months, the September survey should not be interpreted as reflecting any widespread view that the Irish economy is set for a dramatic improvement.

Our best guess is that the strong September survey reflects an element of ‘catch-up’ in sentiment in response to improving trends in a range of indicators of late particularly in important areas such as jobs and house prices. The graphs below suggest that recent trends in consumer sentiment have lagged somewhat behind what might be expected given longstanding relationships between confidence on the one hand and employment and property values on the other. We think very encouraging employment data for the second quarter of 2013 and some positive data and upbeat reports on property price trends may have driven an upgrading of consumer sentiment in the September survey. The diverse channels through which jobs and property values influence the outlook for household incomes and wealth as well as their impact on economic conditions more generally may explain the broadly based nature of the improvement in the confidence index. Perhaps significantly, the buying climate shared in these gains but the change in that element of the survey was relatively modest between August and September and left this element of the index below its average of the three preceding months. For all the good news in the September survey, it would appear that consumers remain very conscious of the pressures on their household finances. So, there is little suggestion that Irish consumer spending is moving onto a notably stronger trajectory. 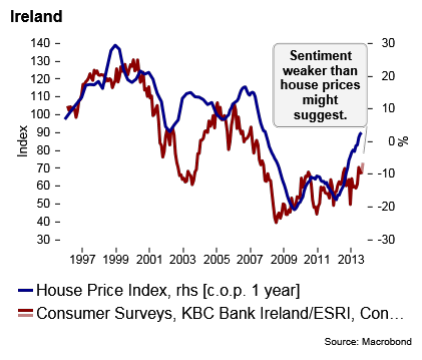 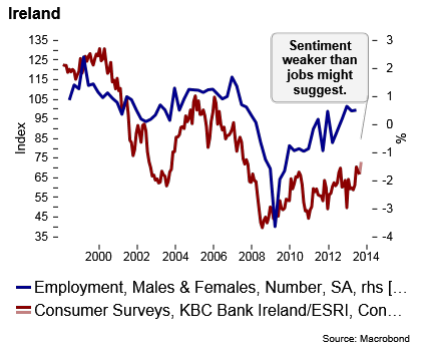