Confidence could cool in coming months on uncertain economic outlook

Irish consumer sentiment recovered in July as sales, warm weather and the prospect of summer holidays appear to have boosted spirits. The details of the sentiment survey don’t suggest any dramatic change in the circumstances of the average Irish consumer of late. Instead, it appears that a number of developments that may not prove permanent meant the glass was seen as half full rather half empty during the July survey period.

The KBC Bank Ireland/ESRI consumer sentiment index rose to 107.6 in July from 102.1 in June. This was the strongest monthly increase since January and raised the index to its best level since March. While the July reading is reflective of a generally positive outlook on the part of Irish consumers, we would emphasise that this is coloured by a significant element of caution and a particular sensitivity to bad news in what is still an uncertain economic environment.

Irish consumers more upbeat than their counterparts in July

As the graph below illustrates, sentiment measures (and household spending power) have taken clearly different paths on either side of the Irish sea since the UK referendum in 2016 even though Brexit is clearly a major worry for Irish consumers. 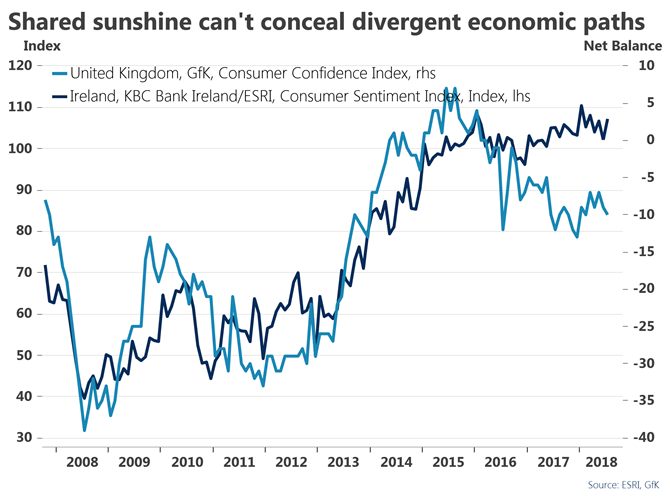 All five elements of the Irish consumer sentiment index registered month-on-month gains in July, the first time this has happened since January. The largest change was in consumers’ perceptions of the buying climate. The improvement in that area was responsible for just under half of the rise in sentiment overall in July.

As we noted previously, the spending patterns of Irish consumers have changed markedly in recent years and are now increasingly concentrated on periods of heavy price discounting. The sharp increase in purchasing plans in July suggested by these survey results likely reflects a step-up in buying (relative to June)associated with summer sales, the new 18-2 car registration plate and summer holiday requirements.

This compression of spending plans gave a likely temporary boost to the sentiment index in July in much the same way as post-Christmas sales contributed to  a ‘local peak’ in the January sentiment survey. Our best guess is that, as in the past, the influence of this factor will reverse in coming monthsand could weigh on sentiment readings into the autumn.

While all elements of the sentiment survey rose in July, the improvement in the buying climate was notably greater than in other components. In general, however, consumers upgraded their views of their own financial circumstances significantly more than they altered their views on broader ‘macro’ prospects.

The second largest improvement in the July survey was in consumers’ assessments of how their household finances had evolved over the past year.  Some 29% of consumers now feel their situation had improved compared to 18% who felt it had gotten worse. While this is the most positive reading since February (June was 24% improved v 19% worsened), it still suggests a modest and uneven improvement in household finances across the Irish economy as a whole.

Consumers were also a little more upbeat about the outlook for their household finances through the coming year, with the pick-up in this aspect of the survey reversing a comparably sized drop in June. Again, this outturn hints that most Irish consumers are seeing and expecting only limited gains in their living standards.

The improvement in consumers’ views on their own financial circumstances was moderate in July but the improvement in their thinking on the broader Irish economy was marginal. In spite of some strong economic data and a number of positive reports on the Irish economy, it seems likely that Brexit concerns and increasing global trade tensions (which also featured as an influence on the US sentiment reading in July) prompted a relatively cautious assessment of Irish economic prospects.

Similarly, in spite of a particularly large number of new job announcements and very encouraging employment and unemployment data during the survey period, consumers were only slightly more positive about the outlook for jobs over the next twelve months than a month earlier. Our sense is that many consumers may be struggling to reconcile reports of buoyant job market conditions with the reality of modest pay gains and ongoing threats to job security.

In these circumstances, consumers likely fear that should threats to current trade arrangements materialise, this would be most forcefully seen in a notable cooling of the Irish jobs market (rather than in more abstract metrics such as GDP).  However, for the moment this is a risk rather than reality and, as such, it is dampening rather than depressing Irish consumer sentiment at present.

While the bounce in Irish consumer sentiment in July follows the forward and back pattern of monthly changes in the sentiment index in recent years, the extent of the increase in July might also be consistent with exceptionally fine weather exerting some positive influence on the mood of Irish consumers of late.  To test for such effects, we incorporated a couple of weather variables into a number of fairly basic statistical models of consumer sentiment. 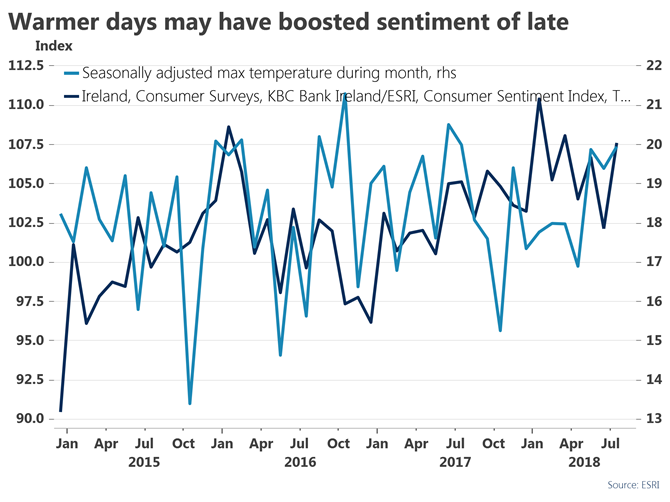 While the results could be affected by the rudimentary nature of the models, they suggest that particularly warm weather of late may have given a modest boost to Irish consumer sentiment. Our results suggest that temperatures need to climb about 3-4 degrees above the seasonal norm to produce a one point rise in consumer sentiment. Incidentally, this exercise also found that sentiment was more affected by temperature rather than sunshine.

Our calculations imply that in most circumstances weather isn’t a key driver of the economic mood of Irish consumers. Moreover, we found weather effects on sentiment were more pronounced in the years before the downturn, possibly reflecting the fact that economic and financial constraints were less binding on most households at that point.

However, exceptionally favourable weather conditions like those experienced in Ireland of late may well have caused more consumers to see their economic glass as half full rather than half empty. At the margin, the almost obsessional interest in the topic of weather in our conversations may have lessened the focus on Brexit and trade wars through the survey period!

The increased opportunity to enjoy the outdoors with friends or family as well as potential  savings on heat, light and possibly through ’staycations’ on foreign travel could also have contributed to a more positive assessment of household financial circumstances as reported in the July survey.

While an Indian summer can’t be ruled out, the likelihood is that a return to more normal weather conditions is likely to prompt a somewhat cooler assessment of the economic climate by Irish consumers in coming months. In such circumstances, an uncertain global economic environment and still modest and uneven gains in household purchasing power may mean Irish consumer sentiment  and spending remain on  a cautiously positive path.