since February 2001. We think three factors explain this exceptional result. First, of all the Irish economy is still set on a strong trajectory and, thus far, has weathered Brexit and other global concerns better than had been feared. This has made consumers more confident about the general economic outlook.

Second, the improving economy is now being felt more broadly by Irish consumers and while it does not appear to be delivering dramatic gains in purchasing power, it is helping to ease household financial strains. Finally, sentiment usually registers a large monthly improvement in January; in four of the past six years, January’s increase was the largest monthly gain of the year. This ‘seasonal’ element of the January increase could be reversed in the next month or two.

The KBC Bank Ireland/ESRI consumer sentiment index rose to 110.4 in January from 103.2 in December. The January 2018 survey puts the sentiment index at its highest level since February 2001. An improvement in all five main components of the survey points to a distinct improvement in the mood of Irish consumers at the start of 2018.

While the survey clearly highlights stronger sentiment of late and this is an unambiguously positive development for the Irish economy, we would be cautious not to overstate the significance of the seventeen year high in the index. The survey focusses on consumers’ assessments as to how their circumstances have developed in the past twelve months. So, the results are better seen as signalling a marked improvement in confidence of late rather than indicating that Irish consumers feel their circumstances are now better than at any time in the past seventeen years.  Accordingly, the survey would be consistent with a healthy increase in consumer spending in the coming year but we don’t feel it points to a return to the boom.

The largest monthly improvement in the January survey results was in relation to consumer thinking on Irish economic prospects. This pick-up undoubtedly reflect a continuing upswing in domestic economic spending and a related easing in concerns that Brexit or developments in US tax policy would trigger an imminent pull-back in activity and employment.

While such fears have not disappeared, the likely impact is now seen as less threatening in part because of the stronger than expected current momentum of the Irish economy. Some 56% of Irish consumers see the Irish economy strengthening further in the coming year while 13% expect some deterioration.

A more positive view of the general economic outlook also underpinned consumer thinking on the Irish jobs market. The sentiment survey was largely completed before the CSO released its new labour force survey but the strong (negative) link between the trend in sentiment and that in unemployment is clearly evident in diagram 1 below.  The January results show 48% of consumers expect unemployment to fall further in the next twelve months, three times as many as envisage a rise in joblessness. 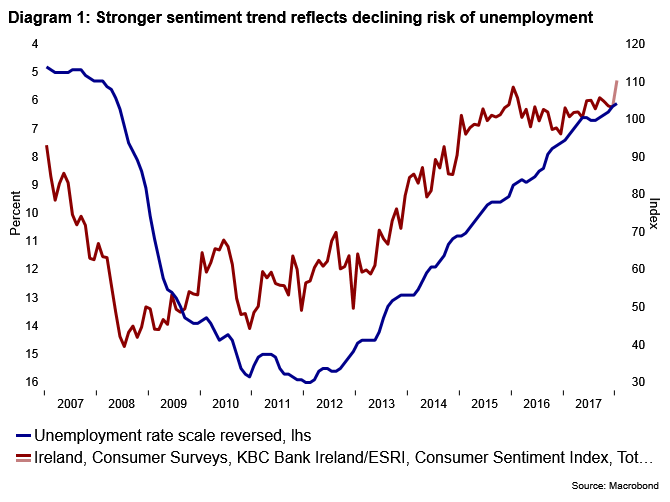 The improvement in consumer sentiment in January was not unique to Ireland. While the comparable indicator for the US declined marginally, there were notable increases in confidence measures both for the Euro area which posted its best result since August 2000 and the UK which posted its largest monthly gain since September 2016. Clearly, a healthier than envisaged global economy is supporting consumer confidence in a range of countries of late and the upbeat tone of most turn of year commentary on the outlook for the coming twelve months would have boosted   sentiment further in this regard.

The ‘macro’ elements of the January sentiment survey for Ireland reflect things that did happen-stronger economic conditions, as well as things that didn’t- notable damage from Brexit related developments.

In the same way, the ‘micro’ elements of the survey reflected things that happened, such as aggressive price discounting in post-Christmas sales which boosted spending plans.  There is also a strong sense of things that are no longer expected to happen in the shape of a marked drop in the proportion of consumers who expect their household finances to worsen further in the coming year.

There is little doubt that a strong Irish economy is now delivering more broadly based improvements in the circumstances of Irish households but the details of the January survey suggest that for most consumers this change is modest rather than marked.

Some 30% of consumers expect their own financial circumstances to improve in the year ahead. This is the largest number since September but broadly similar to the average reading for the first quarter of last year. These results imply no dramatic uplift in consumer spending power for most Irish households.

If the January survey suggests no widely held expectation of marked improvement in household finances, it does point to a very encouraging reduction in the number of households that think their circumstances will worsen in the coming year.

The proportion of consumers that expect poorer personal finances in the next twelve months fell to 9% in January, the lowest share since February 2001. This result suggests that a broadening of the upturn in the Irish economy is making progress first and foremost by easing the difficulties facing Irish households rather than by bringing back the boom.

In reality, the small improvements reported by Irish consumers in the sentiment survey are entirely consistent with strong increases in associated ‘macro’ data. While national accounts aggregates such as household disposable income and compensation of employees both posted annual gains of 5% (in Q3 2017), when adjusted for the rise in full-time employment, the average increase falls to about 1%. For the typical Irish consumer whose employment status has not changed in the past twelve months, household financial circumstances have improved only modestly.

It is important to acknowledge the economic progress suggested by the stronger trend in sentiment through the past four or five years. However, the scale of improvement between the December and January survey results isn’t adequately explained by recent developments in areas of relevance to the typical Irish household.  The monthly increase in sentiment in January 2018 was the largest since that in January 2015 and the largest in the interim was in January 2017.

This pronounced tendency towards a New Year ‘bounce’ in sentiment owes something to bargain hunting at post-Christmas sales but it also seems that Irish consumers begin each year with a significant element of optimism.  The timing of the survey and the limited nature of Budget 2018 tax adjustments mean the latter is unlikely to have been a key driver of the stronger January sentiment reading.

It is fairly common to have strong consumer sentiment readings for January in spite of the frequent assertion (thought to have originated with a travel company press release) that late January is the most depressing time of the year. It should be noted that the consumer sentiment survey is carried out largely in the first half of the month when festive family time and shopping are still fresh in the memory. February sentiment readings tend to see a pull-back that may reflect some of the financial hang-overs from the festive season.

To assess the pure ‘seasonal’ element to the improvement in sentiment in January, we seasonally adjusted the sentiment series. The results shown in diagram 2 highlight a fairly regular pattern of January ‘jumps’ (but because there are no consistent seasonal patterns through the year, we don’t seasonally adjust the headline series as a rule).

This exercise suggests that of the 7.2 point increase in the sentiment index in January, about 5.7 points might be attributed to this seasonal effect with a notably smaller but still encouraging 1.5 point rise due to an underlying improvement. This analysis also suggests that much if not all of January’s gain could be unwound in the February sentiment survey. 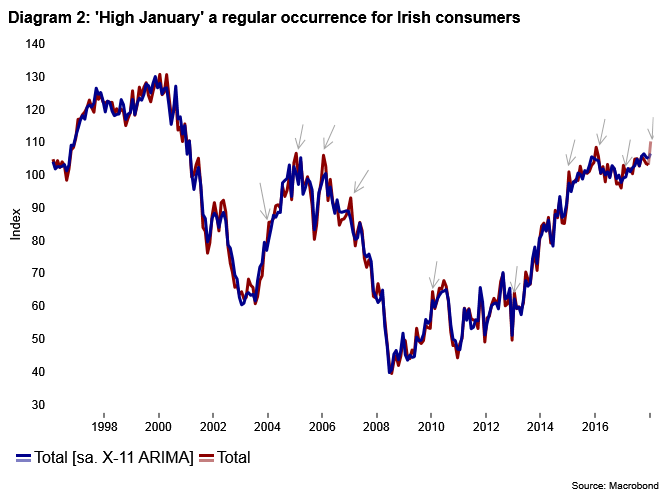