Irish consumer sentiment improved marginally in April, recovering less than half of the decline seen in the index in March. The fractional rise in the index in April shouldn’t be interpreted as signalling a notable change for the better, but it does suggest that Irish consumers are not gripped by a newly returned pessimism.
Instead, the mixed results of recent months suggest many consumers are struggling to make sense of an unclear economic environment. While the details of the survey remain reasonably positive, there has been a clear pull-back from the 15 year high recorded in the January survey. It appears that a notably increased level of uncertainty is now weighing on Irish consumer confidence.

The KBC Bank/ESRI Consumer Sentiment Index increased to 102.7 in April, a 2.1 point gain from March’s reading of 100.6, which, in turn, had shown a 5.2 point drop from February. As the three month moving average of the series- an indicator of the underlying trend of late, posted a 2 point decline in April, the broad message seems to be that a slightly more cautious mood has taken hold among Irish consumers in the past few months. The diagram below emphasises how recent readings suggest a softer trend has taken hold even if current conditions remain broadly positive.  As we noted previously, this ‘hesitation’ seems to owe something to both international and domestic developments. 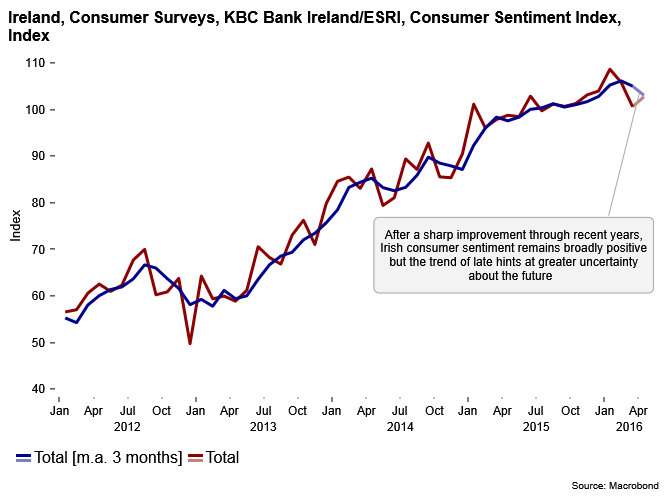 Changes in Irish sentiment typically reflect both global and local factors. To get some sense of the extent to which external or domestic influences are driving movements in the Irish index, we regularly examine similar sentiment indicators for other countries. For April, the results were mixed, an outcome that emphasises the contrasting forces at play in the world economy today that make it difficult for consumers around the world to judge their prospects.

After three months of declines, Euro area consumer confidence posted a modest rise in April, largely reflecting some upgrading of the general economic climate could reflect a range of new policy initiatives by the ECB in March and/or some better than expected readings recently in a range of Eurozone economic data. In contrast, UK consumer confidence fell for the fourth month in a row, principally reflecting increased worries about the general economic climate that likely owe much to ‘Brexit’ related uncertainty.

The most comparable measure of US consumer sentiment to the Irish index, which is prepared by the University of Michigan, declined for the fourth month in a row in April. As is the case with the Irish survey, the current level of the US index is consistent with a generally positive view of household prospects but sentiment in the US has been trending down since the beginning of 2015. This seems to reflect disappointment at how limited an impact the now longstanding, if moderate, US recovery has had on the spending power of the average American household. We think that similar concerns are evident in the details of the Irish sentiment data in recent months.

One lesson relevant to Irish consumer sentiment from the sense of detachment many Americans feel from their country’s economic recovery may be that underpinning sentiment and spending is far from straightforward. In this context, it has been suggested that the tone of the US presidential campaign may have weighed further on US consumer confidence by increasing public focus on a weakening trend in household incomes while falling short on credible policy proposals to reverse this process. Such considerations emphasise the importance for the incoming Irish administration to be realistic when setting out how its policies may affect this country’s economic and social prospects and problems.

Our sense is that developments in other countries confidence measures last month may provide some insight into the thinking of Irish consumers. At the margin, the March decision of the ECB to ease policy in a variety of ways likely underscored that borrowing costs will, as ECB president Mario Draghi noted,  ‘remain at present or lower levels for an extended period of time’. Elevated levels of household debt make the persistence of a low interest rate environment a key issue for the financial well-being of many Irish consumers. Similarly, continuing low inflation that has caused the ECB to commit to a very accommodative policy is supporting the purchasing power of Irish households.

Our judgement is that a low inflation/interest rate environment is a significant source of support for the financial positions of many Irish households at present and likely contributed to a modest improvement in the three elements of the sentiment survey that relate to consumers’ assessments of their personal finances in the April survey.

The pull-back in Irish consumer sentiment in recent months has owed much to a downgrading of the outlook for the Irish economy and jobs which weakened in each survey between December and March. Again, we think there are similarities between these readings and the ‘Brexit’ related worries evident in comparable UK surveys as well as the element of detachment from stronger economic circumstances expressed in US confidence measures.

Encouragingly, the April survey saw a slight improvement in Irish consumers’ views both on the economic outlook and job prospects, although we wouldn’t overstate the significance of these gains. We think they may owe something to a further sequence of upbeat domestic and international forecasts for the Irish economy during the survey period that suggest a capacity to deal with an uncertain global backdrop.

Our sense is that upcoming sentiment readings and the broader trend in household spending may be somewhat volatile in the near term. It may take several months for Irish consumers to form a clear view as to whether their fortunes are likely to be shaped by continuing positive momentum in the domestic recovery or the crystallisation of one of the many risks now framing the broader global outlook.