Irish consumer sentiment deteriorated sharply in September. The KBC Bank Ireland/ESRI Consumer Sentiment Index fell to 60.2 having risen substantially to a near five year high of 70.0 in August. Last month’s decline reversed most of the improvement seen through 2012 with the Sentiment Index now back at its weakest level since last February.

It is probably the case that the notable drop in the sentiment reading in September overstates the change in the mood of Irish consumers of late. As diagram 1 shows, the drop in the three month moving average measure that reduces the impact of volatility in monthly changes was altogether more modest – from 66.6 in August to 66.0 in September. However, in reality, this smoothed measure probably underestimates the change in the mood of Irish consumers during the September survey period even if it is not unreasonable to suggest the underlying trend is still modestly positive. There is little doubt that confidence amongst Irish consumers weakened significantly last month. We think this reflects a number of factors. 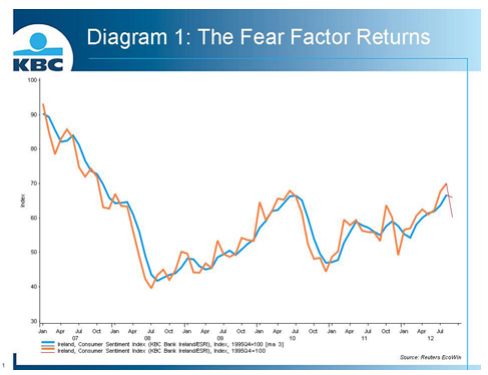 In our analysis of the August sentiment survey, we suggested that an emerging focus on the nature and extent of cuts to public spending and tax increases needed to meet the adjustment target envisaged for next December’s budget would test the resilience of the improvement in sentiment seen through most of 2012. We think recent intense media speculation on a range of potentially very painful Budget adjustments together with a couple of other negative economic developments unnerved Irish consumers.

The September survey results also suggest the improvement in confidence this year was quite fragile. Although we still feel there has been some underlying improvement in consumer sentiment through the first nine months of 2012, the reality is the conditions the average Irish consumer faces remain very difficult and uncertain. For most of the past nine months, the improvement in sentiment reflected a gradually broadening view that the worst might be over. The September survey results suggest consumers are no longer sure that is the case. As a result, the fear factor has returned.

Consumer sentiment readings for September for other countries were mixed but apart from Greece and Slovenia where major domestic economic concern also fuelled significant declines, there were few changes on the scale seen in the Irish data. The comparable US measure, compiled by the University of Michigan, posted a significant increase reversing most of its early summer weakness. UK confidence also improved. Although sentiment among UK consumers remains weak, it has picked up somewhat in recent months. In contrast to these data, Euro area confidence posted a fourth consecutive monthly decline with sentiment weak and/or deteriorating across a wide range of “core” European and “peripheral” economies in spite of some improvement in the mood of financial markets during the survey period.

Economic Difficulties And Personal Financial Pressures Again In The Spotlight

The behaviour of sentiment measures for other countries in September suggests that domestic elements played the key role in the sharp weakening in Irish consumer confidence last month. To a certain extent, a renewed focus on Ireland’s economic difficulties in itself may have played some role in this regard. For most of the past five years, consumers have faced an almost incessant barrage of ‘noisy and nasty’ news on the Irish economy. However, from the perspective of the average Irish consumer, it had gone a good deal quieter on the economic front through much of 2012. The attention of financial markets and media moved elsewhere and while Irish economic data remain mixed at best, the sharp deterioration of recent years appeared to have ended. In September there was a renewed spotlight on the economy and on the financial pressures facing the average consumer.

A number of factors likely contributed to the return of consumer concerns but we think the major influence was intense speculation about the range of painful adjustments that might form part of the upcoming Budget. Although Irish consumers expected to endure more pain in December’s Budget, the scale of cuts to health and welfare spending and the possible implications of a property tax appear to have come as something of a nasty surprise. In addition, some doubts emerged about the extent of European support for Ireland’s adjustment programme, there was a renewed focus on the availability of credit and some high profile job loss announcements during the survey period. These developments prompted a marked downgrading of the component of the sentiment survey that is related to the outlook for the Irish economy.

As consumers began to calculate the probable impact on their household finances of substantial cuts in health and welfare spending and a new property tax, they also had do deal with the news of looming increases in energy bills. In these circumstances, the elements of the sentiment survey that relate to household finances were also marked down sharply last month and the buying climate weakened. This ‘perfect storm’ meant that all five of the main components of the Consumer Sentiment Index posted monthly declines in September, the first time this has happened since December 2011.

Sentiment Remains Fragile, So Uncertainty Has A Major Impact

We think the decline in the Consumer Sentiment Index in September may exaggerate the deterioration in the mood of Irish consumers last month in the same way that the August reading now looks to have overstated the improvement reported in that month. For this reason, it may be better to look at the broad trend rather than to focus solely on monthly swings in the index. In the light of the September results, it seems clear that the tentative easing in consumer fears though the first eight months of 2012 was relatively fragile in nature.

Sentiment has been dealt a significant blow by the recent focus on what may or may not be done in Budget 2013. While consumers had braced themselves for another tough Budget in December, the prospect of a further substantial blow to household spending power in 2013 came into an altogether sharper focus during the September survey period. This may well weigh on consumer spending in coming months. So, recent tentative signs of stabilisation in spending could be short lived.

These considerations would suggest the Government should seek to reduce uncertainty ahead of the upcoming Budget in so far as is possible. The fragility of both sentiment and household spending power among Irish consumers would also tend to argue that the overall scale of adjustment in December’s Budget should be no greater than the minimum amount consistent with Ireland’s continued adherence to its EU/IMF programme targets.