Although the monthly drop in Irish consumer sentiment was reasonably modest in December, it was sufficient to push the index to its lowest level since February 2015. The main message coming from the sentiment survey through 2016 appears to be that, from the perspective of the average Irish consumer, the economic recovery has significantly overpromised and under-delivered in the past year.

The survey period did not see any dramatic developments that might signal a markedly weaker outlook for the Irish economy or any major deterioration in the financial circumstances of Irish households. However, there was a considerable focus on potential threats to the Irish economy posed by Donal Trump’s election in the US and the looming start of ’Brexit’ negotiations in early 2017. Without any countervailing positive surprises through the survey period, these risks were sufficient to cause consumers to further downgrade their assessment of the general economic outlook as well as their own financial circumstances.

Our sense is that the downgrading of sentiment through 2016 reflects both the reality of a notably more uncertain and challenging economic environment in Ireland than metrics such as official GDP data would imply as well as the absence of a broadly felt improvement in the living standards of the ‘average’ Irish household. If the December sentiment reading hints at an Irish consumer who currently sees the glass as half empty, it probably reflects a view that after the travails of recent years, the glass should be more than half full at this point.

It should be noted that at current levels, the consumer sentiment index is still consistent with a continuing increase in consumer spending but the flagging momentum of the sentiment index testifies to the marked absence of a widely felt ‘feel-good factor’ that would typically move confidence and Irish consumer spending onto an even stronger trajectory. As such, the survey is signalling that, from a consumer perspective, the Irish economic recovery is not rooted as deeply or as broadly as had been expected.

The KBC Bank Ireland consumer sentiment index slipped to 96.2 in December from 97.8 in November. While this was a relatively modest drop, some sense of how disappointing 2016 was in terms of the expectations of Irish consumers is hinted at in a comparison with the December 2015 reading of 103.9. 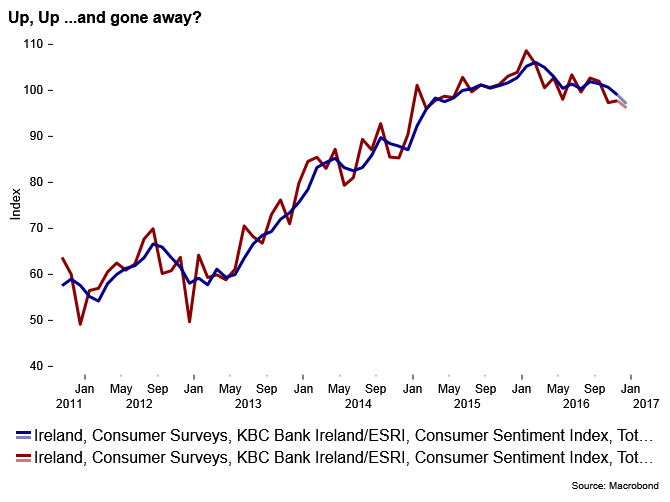 The softer trend in Irish consumer sentiment in late 2016 stands in marked contrast to a dramatic improvement in the most comparable US metric which rose to a thirteen year high in December, as US consumers anticipate that the Trump presidency will have a very favourable impact on the US economy and their personal financial circumstances.

Consumer confidence in the Euro area also improved in December, with a modest gain sufficient to push that index to its healthiest level since April 2015. In the UK, consumer confidence reversed much of the deterioration but current readings of that survey continue to reflect concerns about potentially adverse impacts of Brexit on living standards in the UK.

The decline in Irish consumer sentiment in December was broadly based, with four of the five main elements of the index recording lower monthly readings than in November. The exception was the jobs component of the survey which recorded a small improvement that likely reflects the release of strong official employment data and quite a number of new jobs announcements.

With the Central Statistics office reporting an extra 57,500 people at work in the Irish economy in the past year and the unemployment rate falling to an eight year low of 7.3% in November, it might be expected that consumer thinking on the Irish jobs market would improve materially but the December result was still the second weakest monthly reading (after November) since June 2014. As noted previously, we think this caution reflects the perception of increased threats to the economic outlook and job prospects from developments in the US and UK as well as the emergence of a more fractious pay climate domestically.

In circumstances where much of the domestic and international commentary focussed on downside risks to economic prospects, it is scarcely surprising that consumers downgraded their assessment of the general outlook for the Irish economy further in December. The modest nature of this revision last month largely reflects the fact that consumers have pared back their views almost continuously through 2016. As a result, the modest slippage seen in the December survey was sufficient to produce the weakest monthly reading on broad economic prospects since November 2013.

Again, it is important to emphasise the December survey does not suggest Irish consumers are bracing themselves for an economic Armageddon. It remains the case that notably more consumers expect the Irish economy to strengthen (38%) than to weaken (21%) in the next twelve months. However, this balance is notably less encouraging than the December 2015 reading where positive responses exceeded negatives by 61% to 12%. The survey is simply telling us that there is far less certainty that the Irish economy will deliver broadly felt growth in the year ahead.

A more uncertain economic climate has made consumers more cautious about their own personal financial circumstances and all three elements of the survey related to household finances edged lower in December. In each instance, the main driver was a reduction in positive responses rather than any marked rise in negative responses, suggesting that reduced optimism rather than rising living costs were the main concern.

The drop in consumer sentiment in December neatly captures the sense of a year that failed to live up to expectations for many Irish households. The details of the survey are consistent with an Irish economy that is continuing to grow but one where that growth is uneven and has not repaired many of the losses suffered through the preceding downturn.

The December survey is not pointing to a dramatically poorer economic outlook but to a sense of detachment from extremely strong conventional economic metrics of recent years and concern about an increasingly uncertain future. The perception that the economic recovery to date has not been sufficiently inclusive and that the persistence of that recovery may be less certain in the year ahead means that the predominant mood captured by the consumer sentiment survey at present is a ‘feeling of missing out’.