Irish consumer sentiment didn’t change markedly in June.  A slight increase meant the small monthly decline reported in May was largely reversed.  The outturn for June is reasonably encouraging even if the details of the survey suggest Irish consumers are still nervous about what remains a very uncertain economic outlook.  Consumers are aware how difficult economic conditions are in Ireland and elsewhere at present but they also seem to have detected some slightly more encouraging developments that mean the extreme fears that weighed on sentiment in late 2011 have not re-emerged.

The KBC Bank Ireland/ESRI Consumer Sentiment Index increased to 62.3 in June from 61.0 in May, bringing it very close to the six month high of 62.5 recorded in April.  The underlying trend as indicated by the three month moving average of the series also edged higher in June to its strongest reading since August 2010.  So, last month’s reading appears consistent with the view that the mood of Irish consumers became a little less gloomy through the first half of 2012.

Improvement in Ireland Contrasts With Other Countries

The slight rise in Irish consumer sentiment in June was at odds with a deterioration in similar indicators for the US and the Eurozone.  The comparable US indicator, compiled by the University of Michigan, dropped to its lowest level since December.  However, this was the first decline reported in the past ten months during which time the Index climbed to a five year high.  So, the factors influencing the mood of the US consumer of late appear somewhat different to those weighing on their Irish counterparts.

The Euro area confidence gauge weakened somewhat in June.  Uncertainty over the future of the single currency area combined with the near certainty of further budget austerity implies poorer prospects for European consumers.  So, their mood has remained relatively downbeat through the first six months of this year.  Compared to results for the Euro area, the slight improvement in Irish Consumer Sentiment in June is encouraging and probably reflects different judgements on the part of consumers in Ireland and elsewhere on the implications of the broadening of the Euro area crisis in the past year or so. 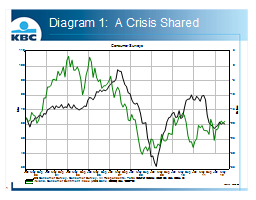 Up to the middle of last year a sense that the problems of Ireland and other ‘sinners’ didn’t matter to consumers in countries of the ‘saints’ meant sentiment in Ireland was notably weaker than the Euro area average as the diagram above indicates.  Irish consumers also worried more than many others about the implications of a Euro break-up at the end of 2011.  However, the emerging sense of a shared or common crisis rather than uniquely local failings together with the impact of supportive action such as easier ECB policy contributed to a modest improvement in Irish consumer sentiment through early 2012.  Viewed from this perspective, it will be interesting to see whether the outcome of the end June summit and the early July ECB policy meeting contribute to a further improvement in Irish consumer sentiment relative to that elsewhere in Europe when survey results for July become available.

As has been the case for some time, the details of the Irish consumer sentiment reading for June were mixed.  Both ‘macroeconomic’ elements of the survey posted month on month declines in June.  Views on the economic outlook deteriorated for the second month in a row.  This probably reflects rising concerns in regard to the Euro area crisis during the survey period between mid-May and mid-June as well as some reaction to weakness in recent US and UK data that points towards a more difficult global economic outlook.

Such concerns also likely spilled over into a slightly more negative assessment of the outlook for employment by Irish consumers that contrasts with some relatively encouraging readings in this element of the survey in the past few months.  Another influence on weaker job sentiment in June may have been the release during the survey period of slightly poorer than expected employment data for the first quarter of 2012.  The increasing incidence of long-term joblessness in this report may have further unsettled already nervous Irish consumers.  Increased jobs concerns in this month's survey may also reflect slightly poorer seasonal job prospects as suggested by today's live register data for June.

In the current environment, Irish consumers probably attach more importance to the threat of layoff and the likely persistence of unemployment than they do to continuing signs of new hiring.  So, it is not entirely surprising that these negative influences outweighed the impact of a number of new job announcements during the survey period.  This element of the June survey probably encapsulates the fragile position of the Irish consumer at present.  Although there has been some improvement in early 2012, we remain some substantial distance from what might be termed a ‘normal’ recovery.

Consumers may sense some positive side effects

Of course, consumer spending patterns are not determined solely by macroeconomic conditions.  Trends in household spending power are also critically important and the June results for the three areas of the survey relating to consumer finances were encouraging as all showed modest gains.  While ‘macro’ and ‘micro’ elements tend to move in a similar direction over time, it is not unusual for this sort of divergence to occur on occasion.  Indeed, in this particular instance, darker economic clouds appear to have had some significant silver lining in terms of household finances.  While there is a clear sense among Irish consumers that an escalating Euro crisis is not a good thing, the immediate negative consequences for the financial situation of the average household may appear relatively limited.  However, significant side effects of the crisis in terms of a fall in oil prices and the prospects of lower borrowing costs began to feature in commentaries through the June survey period with financial markets increasingly expecting the ECB to cut its key policy rates at its early July Governing Council Meeting on July 5th.  We noted previously that actual or anticipated movements in borrowing costs tend to have a significant impact on Irish consumer sentiment that reflects the importance of mortgages and other borrowings in the monthly outgoings of many families.  We think an increasing focus on the possibility of an ECB rate cut likely contributed to a somewhat less negative view of personal finances in the June Sentiment Survey.

It should be emphasised that Irish consumers remain fairly downbeat in regard to their own financial prospects but there has been a drop in the proportion of consumers that expect a further deterioration in the coming year.  The number expecting a further worsening in the year ahead has eased from 63 per cent last December to around 45 per cent in the June survey.  Although there has also been some increase in the number of consumers that expect their financial situation to improve – at just 12% of the survey in June, these remain in a very small minority.  So, the most significant change in this element of the survey of late has been an increase in the number of consumers that expect their financial situations to remain broadly stable in the coming year.  This reflects the emergence of potentially helpful influences such as the prospect of lower borrowing costs and fuel bills as well as greater stability or small increases in wages that have helped counter the negative impact of further Budget austerity.

‘Strategic’ buying rather than a surge in spending

A turnaround in consumer sentiment that stems primarily from a drop in negative responses rather than a substantial increase in positive replies seems unlikely to produce any sharp increase in household spending.  However, consumers may be more willing to contemplate selective increases in outlays.  In this context, the June survey saw an improvement in the buying climate from a relatively weak reading in May to its best level since January.  This probably owes something to the increased chance of lower borrowing costs and fuel bills.  It may also reflect some seasonal purchases related to holidays.  However, we think a significant driver is likely to have been the expectation of significant bargains in the summer sales.  With difficult economic and weather conditions limiting consumer spending through the first half of 2012, the likelihood is that retailers would have had to resort to heavy price discounting in their efforts to shift surplus stock.  To the extent that consumers are slightly less terrified about their circumstances of late, some may be willing to contemplate ‘strategic’ purchases in the summer sales.  That said, the fact that the improvement in the buying climate came predominantly from a drop in negative replies rather than an increase in positive responses means it is unlikely that Irish consumers will step up their spending markedly.

In summary, the June survey results are encouraging in that they suggest the extreme negative influences on Irish consumer sentiment and spending power continue to fade gradually.  However, the details of the June survey also emphasise that any turnaround in the mood of Irish consumers is likely to be an uneven and extended process.  The divergence of ‘macro’ and ‘micro’ elements of the survey last month reflects the mixed picture that the Irish economy now presents.  Moreover, as we noted previously the fact that the improvement in the sentiment survey reflects an easing in the ‘feelbad factor’ rather than the onset of a ‘feelgood factor’ means that spending is likely to remain subdued.  In light of the circumstances facing the average Irish consumer at present, a patchy and prolonged turn is about as much as could be expected.  This sort of backdrop means it will be instructive to learn whether the outcome of the end June EU summit and the likely delivery of an ECB rate cut translate into a notably more favourable consumer sentiment reading in July.