Irish consumer sentiment weakened somewhat in November, likely reflecting a number of concerns that attracted increasing attention through the survey period.  These ranged from a renewed surge in Covid cases, through the re-emergence of Brexit worries, to sharply higher living costs- particularly in relation to energy and housing.

The relatively modest decline in Irish consumer confidence in November partly reflects the fact that the tone of the sentiment survey in recent months has been relatively cautious if broadly positive. This month’s reading may also suggest that Irish consumers believe they should be able to cope with the issues now emerging on economic and health fronts.

The KBC Bank Ireland consumer sentiment index declined to 83.1 in November from 86.8 in October. While the monthly drop is not large by historic standards, it is the largest monthly fall since January and brings the sentiment index to its lowest level since April. As such, it points towards a change in thinking encompassing some increased nervousness on the part of Irish consumers.

Although the November reading does not point towards a markedly poorer outlook, it hints that consumers fear any improvement in the Irish economy and, by extension, household financial circumstances may fall short of expectations that had built steadily if modestly since the spring.

We should note that the drop in Irish consumer sentiment in November is relatively modest in comparison to the fall seen in comparable indicators for other countries of late. Preliminary US data showed an unexpected decline in sentiment to a new 10 year low this month while recent months have also seen marked softness in similar Euro area and UK confidence metrics.

The weakest elements of the KBC Bank Irish consumer sentiment survey for November were in relation to the outlook for the economy and jobs. These had been the strongest areas in the October survey reflecting a range of positive forecasts and reduced concerns about changes to the global tax framework at that time.

Through the November survey period, the ‘macro’ headlines were notably gloomier as there was a significant focus on the scale of problems in Ireland’s housing market as well as broader concerns about sharply rising living costs. It should also be noted that the softening in these elements of the index stemmed principally from a drop in those expressing positive views rather than a surge in those citing negative views on the outlook for the economy and jobs.

We also think the emerging 4th wave in Covid cases was an important factor weighing on the mood of Irish consumers of late as speculation about the re-imposition of health-related restrictions became more widespread during the November survey period.  In circumstances where the economic fall-out of such restrictions might be expected to be concentrated in specific sectors, it is not entirely surprising that the survey would see the general economic outlook downgraded more than consumers own financial circumstances.

Although renewed nervousness about pandemic-related risks likely played an important role in the weaker consumer sentiment reading in November, it is important to highlight that the limited degree of decline in Irish consumer confidence this month points towards a markedly increased capacity for consumers to cope with the economic and financial consequences of the virus. The diagram below illustrates this by showing  notably smaller adjustments to the sentiment index to marked changes in case numbers through the various waves of the pandemic. 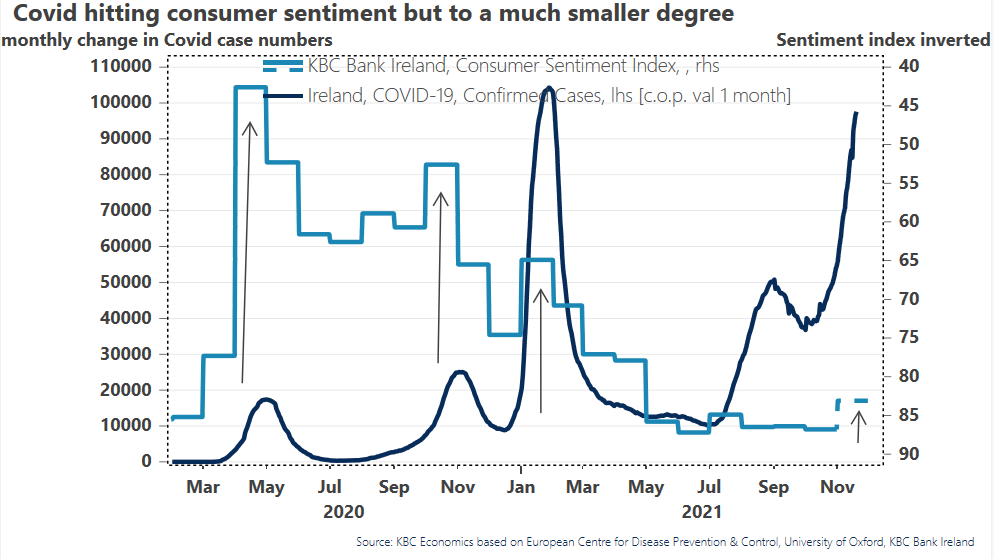 Our sense is that rising inflation also weighed on Irish consumer sentiment in November. However, the relationship between the cost of living and consumer confidence is rather complicated. On occasion, rising inflation reflects an economic recovery or buoyant economic conditions and, consequently, can be associated with improving sentiment. At other times, higher inflation is unambiguously problematic. So, in the early 2000’s and just before the crash, rising inflation coincided with sliding sentiment.

An important consideration for consumers is the nature of inflation pressures.  Whereas inflation caused by a booming economy may have both positive and negative associations, there is a very clear negative relationship between Irish consumer sentiment and global oil prices. Over the near twenty six year history of the survey, there is a strong negative correlation between the two series (-0.623). This would suggest that recent rapid increases in energy costs likely depressed sentiment in November. A notably increased focus through the survey period on the degree of difficulty posed by scarce accommodation and rising house prices and rents would also have been expected to weigh on sentiment this month.

Although all five main components of the consumer sentiment index weakened in November, the decline in those elements focussed on household finances was relatively modest. In part, this reflected the fact that these parts of the survey also weakened in October-presumably as concerns about rising living costs more than offset the ‘macro’ positivity seen in that month.

It could also be the case that to the extent that the November weakening in sentiment was driven by increased Covid concerns, consumers may have taken the view that the economic and financial fall-out will fall on specific sectors as in previous ‘waves’ while significant fiscal supports will limit the wider fall-out. As a result, the November survey points towards still healthy Christmas spending intentions.

However, as a special question asked in conjunction with the November sentiment survey indicates, a significant number of Irish consumers remain cash constrained-as well as cautious. Consequently, any increase in consumer spending looks more likely to be labelled decent rather than dramatic.

The November consumer sentiment survey included a number of special questions on consumers Christmas spending plans. As table 1 below indicates, some 37% of consumers plan to spend less on going out and present buying than last year whereas only 13% plan to spend more.  (Note ‘not applicable’ responses  in the tables below likely capture both the distorting influence of the pandemic on consumer behaviour as well as responses from those who do not mark Christmas through spending, entertainment etc). 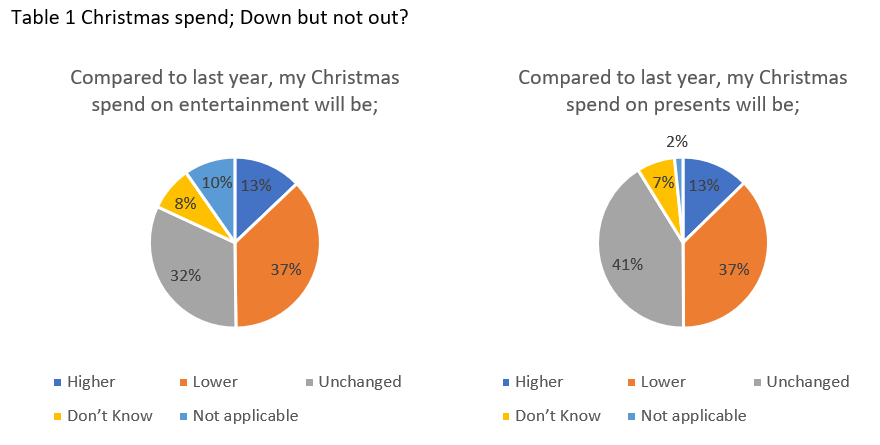 Covid-related concerns may dampen socialising and related spending while there may also be a more generalised caution in response to increased economic uncertainty that weighs on spending plans. However, the likelihood is that the planned pull-back owes much to cash constraints. Responses to another question (see diagram below) found that only 12%  of consumers have more money available to spend this Christmas than last whereas 38% say they have less money available. So, roughly one in three consumers say they have less spending power this Christmas than last whereas just one in eight say they have more money to spend this year.

Spending power hit for many, raising living costs to blame? 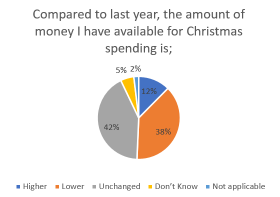 The detailed results suggest that, while all groups report weaker conditions this year than last, consumers in Dublin are able and willing to spend more this Christmas than their counterparts elsewhere with consumers in Munster expressing most concern about their spending power. At the margin, this difference may be because increased fuel costs could be denting spending power more outside the capital.

Younger consumers are also more likely to plan increased spending than their older counterparts with those aged 18-24 more positive and those aged 45-54 more negative on both their Christmas spending plans and finances than any other age group. Consistent with their responses to other recent ‘special’ survey questions, the 45-54 age group appear to be facing comparatively greater financial pressures than other demographics perhaps reflecting a larger amount of ‘fixed’ outlays related to family size and obligations at that stage of the family life cycle.

Reflecting significant differences in discretionary spending power and rising inflation in basic living costs, there are marked variations in the Christmas spending plans of those who say they have difficulties making ends meet and those who say they can readily make ends meet. Those with difficulties are three times as likely to report reduced money this Christmas as consumers who can make ends meet with ease. In direct contrast, three times as many ‘comfortable’ consumers report they have more money available to spend this Christmas as those who face ongoing financial difficulties.