Solid rather than spectacular monthly change suggests recovery broadening but no sense of a boom for most consumers. 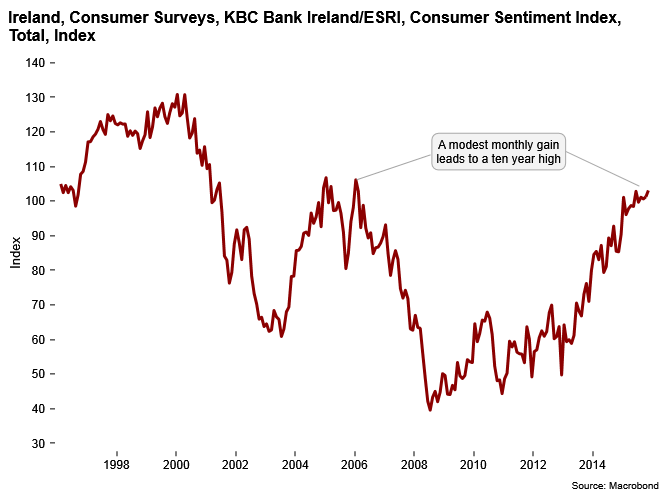 The improvement in Irish consumer sentiment in November reflected in part a positive response to Budget 2016 as those elements of the survey related to household finances both showed clear improvements. However, the strongest component of the survey last month related to the jobs market, emphasising the link between sentiment and the general improvement in domestic economic conditions now becoming more widely established. In these circumstances, it was notable that the buying climate weakened in November, highlighting continuing caution that likely reflects on-going pressure on many households' finances and a focus on upcoming spending commitments around Christmas.

The increase in Irish consumer sentiment last month coincided with healthier readings from similar indicators elsewhere. However, in the US and Euro area confidence indices merely reversed recent weakness, leaving both of these readings below levels reported during the summer. It remains the case that the recovery in the global economy is uneven and its persistence somewhat uncertain. So, consumers worldwide are cautious rather than carefree. That said, the most recent batch of sentiment surveys suggest that  healthier job creation in the US and more robust activity in Europe of late coupled with lower oil prices appear to be generating a little more ‘feel-good’ among households in most western economies.

The 1.8 point monthly increase in the KBC Bank Ireland/ESRI consumer sentiment index in November was not particularly large by the standards of recent years but it was broadly based. Four of the five components of the sentiment survey were stronger than in October. Of these, the most notable aspect was the improvement in sentiment towards jobs which reported its strongest monthly gain since July 2014.

In spite of a further spate of new job announcements during the survey period, the scale of this monthly improvement is somewhat surprising and probably reflects some element of catch-up in light of fairly subdued readings in this element of the survey of late. It may also hint that consumers sense some improvement in earnings prospects as a result of the healthier jobs market. Finally, the stronger tone in November is entirely consistent with the picture emerging from official data published just after the survey period. These showed a 4% rise in full time employment in the past year and a dip in the monthly unemployment rate to 8.9% in October, the lowest reading since December 2008.

The notably more positive jobs reading in the sentiment survey in November contrasted with only a marginal improvement in consumers’ assessment of the general economic outlook for the next twelve months. The comparatively cautious judgement on the economy in November should be seen in the context of very positive readings in this element of the survey for some significant time.

The absence of a stronger reading last month might be explained by a number of developments. One consideration is on-going concerns about the health of the global economy. Another might be more specific worries such as the implications of ‘Brexit’ that attracted a good deal of attention through the November survey period. Finally, it may be that some of the criticisms of Budget 2016 that highlighted the possibility of a return to ‘boom-bust’ policy-making weighed somewhat on Consumer thinking.

While these issues may have limited the improvement in sentiment last month, it remains the case that consumers take a very positive view of the outlook for the Irish economy in the year ahead; some 60% expect an improvement with only 11% anticipating weaker conditions.

A notable feature of the November survey was a clear improvement in both elements that relate to household finances. Our sense is that Budget 2016 contributed significantly to this. It remains the case that a slightly larger number of consumers (28%) feel their household finances worsened in the past year than experienced an improvement (24%) but this was the healthiest result for this component of the survey since May 2007. We reckon that on-going weakness in oil prices, generally subdued inflation, rising property prices and some improvement in earnings prospects could all have contributed to this result.

Consumers were also more upbeat about the coming twelve months, with 32% expecting an improvement in their personal finances compared to 14% that expect a deterioration. While the numbers that anticipate weaker household finances was unchanged from October, the numbers that envisage healthier personal finances climbed from 29% to the highest share since December 2000. This shouldn't be regarded as signalling a surge in spending power but it does suggest an improvement in household finances is expected to become more broadly-based across the Irish economy. Alongside the various elements mentioned above, it seems likely that the measures announced in Budget 2016 are important in this regard.

Perhaps surprisingly, the only element of the survey that weakened between October and November was the buying climate which recorded its weakest reading since November 2014. Our sense is that this may reflect particular seasonal influences that relate to the anticipation of increased outlays over Christmas and a correspondingly more cautious attitude to spending in November. We also think the pull-back in this element likely reflects continuing pressures on many household budgets as well as a reasonably restrained approach on the part of most others, doubtless informed by the lessons of the recent downturn.

In summary, the November sentiment survey makes for encouraging reading in that it hints at a further broadening of the Irish economic recovery. The fact that consumer confidence is now at a ten year high has to be seen in the context of both the strength of the current upswing and the intensity of the downturn that preceded it.

The modest monthly change in November and the related weakening in the buying climate emphasises that the recovery in the fortunes of Irish consumers is still fairly restrained. So, the sentiment survey signals the reality that for most consumers things are now getting better and this is likely to prompt a clear improvement in spending from the depressed level of recent years but the survey is equally emphatic in signalling that we are not seeing a consumer boom.