Limited gain hints that concerns have eased rather than ended..

..but consumers a little more positive on income prospects and spending plans- could this boost Irish economic growth in the coming year?

A prosperous new year for all? One in three Irish consumers expects 2020 to be better than 2019 but one in five fears weaker circumstances

A  small but significant mood change?

Irish consumer sentiment improved for a second successive month in December largely reflecting the reduced near term risk that the UK might crash out of the EU. A relatively modest increase in the consumer sentiment index last month might suggest Irish consumers regard Brexit risks as diminished and somewhat delayed but far from disappeared.  That said, the details of the December sentiment survey also point towards somewhat more positive views on income prospects and purchasing plans that may translate into stronger consumer spending over the turn of the year.

The KBC Bank Irish Consumer Sentiment Index rose to 81.4 in December from 77.1 in November. This 4.3 point monthly increase was a little more than half the size of improvement seen in November. So, there is little sense in these data that the mood of Irish consumers has become dramatically more optimistic but consumers judge that the risk of a dramatic near term deterioration in their prospects and those of the broader Irish economy have markedly reduced.

Some sense of a small but potentially significant change in the mood of Irish consumers is suggested by the fact that the improvement in the sentiment index through November and December represents the largest two month gain in almost five years (since January 2015). Indeed until the December 2019 outturn, there hadn’t been clear successive month on month gains in the index since January 2016.

The sense that reduced Brexit concerns were central to the improvement in Irish consumer sentiment last month is supported by the contrast between a large increase in UK consumer confidence in December,  a relatively flat reading in  the comparable  metric for the US and a decline in consumer confidence in  the Euro area. A range of geopolitical risks continue to cast shadows over the global economic outlook notwithstanding low unemployment and improving spending power on both sides of the Atlantic. The outperformance of UK and Irish consumer confidence measures in late 2019 suggests a key ‘local’ concern has eased, at least for now. The question is whether that relief will prove sufficient to spark a material step-up in spending on either side of the Irish sea in early 2020.

All five key elements of the Irish consumer sentiment index recorded stronger readings in December 2019 than in November. In relation to views on the broad Irish economy and job prospects, this was largely the result of a drop in the number of negative responses rather than notably more positive responses. So, these elements hint at easing gloom rather than emerging boom.

However, with ‘macro’ threats reduced, the survey details also suggest some increased optimism about consumers own circumstances. Hence, the improvement in expectations for household finances and spending plans was primarily driven by an increase in positive responses.

The strongest improvement in December was seen in relation to views on the jobs market which had shown the weakest performance the previous month. December did not see the sort of high profile layoff announcements that marked the November survey period.

Instead, official data showed a pick-up in job creation, a drop in the unemployment rate below 5% and hourly earnings growing at 4% for the first time in more than ten years. With the risks of Brexit easing at least temporarily, it seems consumers could pay more attention to the reality of a strongly performing Irish economy and what it might mean for their personal finances.

The December 2019 consumer sentiment reading reflects a small but significant change in the thinking of Irish consumers that may become less focussed on risks to the downside and more conscious of a growing Irish economy and what it may offfer. Caution still prevails; at 81.4 the current level of the KBC Bank consumer sentiment index is still somewhat below the series long term average of 87.9. It is also well below the December 2018 reading of 96.5.

The disappointing trend in the sentiment survey in recent years hints at how corrosive Brexit has been for Irish consumer confidence since the 2016 referendum in the UK. With Brexit risks less likely to dominate consumer thinking in the immediate future, sentiment may be more heavily influenced by how inclusive the current Irish economic recovery feels and what policy prescriptions may be put forward to strengthen, spread and sustain it.

Do Irish consumers feel 2020 will be good for them?

To get a broader sense of how Irish consumers assess their prospects for the coming year, we asked an additional question in the December survey as to how 2020 might compare to 2019. The  results shown in the table below suggest that in terms of their personal circumstances, roughly half of Irish consumers see the year ahead as not being materially different to the one just ended.  Almost one in three expect an improvement but a significant one in five envisage a worsening of their circumstances in the coming year. 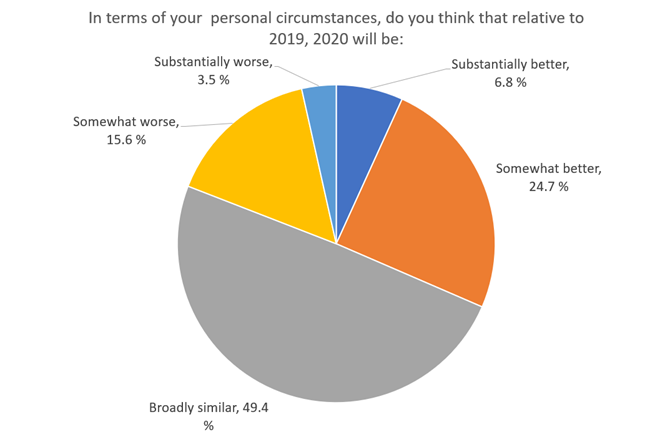 Most macroeconomic commentary implicitly assumes that robust economic growth translates almost automatically into meaningful improvements in the circumstances of most households - the rising tide is seen lifting all boats. However, these survey results warn that most consumers do not anticipate such an outcome for themselves in the year ahead; two thirds of Irish consumers do not expect a material improvement in their circumstances in the coming year and just one in fifteen anticipate a substantial improvement.

A disconnect between the tone of economic commentary and the perceptions of consumers could be the result of a range of influences. It could reflect unrealistic expectations on the part of consumers (or economists) as to how living standards might reasonably evolve. The gap might also be because a ‘new normal’ of increased uncertainty and associated insecurity is altering the way consumers  think about the economy and their personal circumstances. In the same vein, the disconnect could reflect continuing ‘scarring’ from recent crisis.

In part, it may also  be driven by a sense that the fruits of economic growth are not being felt evenly. In this context, some 6% of those reporting that they are making ends meet with difficulty expect their circumstances to become substantially worse whereas none of those making ends meet easily envisage such an outcome. These findings might suggest the spread rather than the strength of economic growth could hold the key to Irish consumer sentiment through much of the year ahead.