Business sentiment at eight and a half year high as activity and employment increase.

Jobs gains continue but one in five firms say availability of suitable candidates has declined.

Most firms not seriously concerned about political uncertainty but hint it may weigh on domestic demand.

A very positive assessment by businesses of their operating environment prompted a rise in the KBC Bank Ireland/ Chartered Accountants Ireland Business Sentiment Index for the first quarter of 2015. The business sentiment index rose to 127.7 from 124.3 in the final quarter of 2014. So, the spring reading is the strongest in the eight and a half year history of the survey.

Irish business conditions  continued to improve in early 2015. Although the pace of output growth eased marginally in the past three months, employment growth picked up as firms see further increases in activity in the next three months. Completing a very favourable picture, companies also grew more confident about the outlook for the broader Irish economy. The survey points to another step-up rather than any sea-change in overall business conditions of late. However, the upturn continues to spread more widely across sectors and firms underpinning confidence that it will continue and strengthen further.

Diagram 1 hints that the pace of business growth eased marginally in early 2015. While the number of firms reporting increased output grew, the number reporting weaker activity increased somewhat faster. However, it remains the case that output gains continue to be very broadly based with six times as many firms reporting higher business volumes as reported lower activity levels. 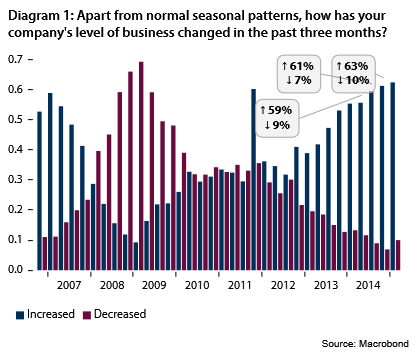 The share of firms reporting increased business in the past three months grew notably in areas such as food and other manufacturing while it eased somewhat- albeit from comparatively high levels - in construction and  consumer focussed areas. All sectors continued to post substantially positive output balances (ie notably more companies increasing rather than cutting production) but there was a clear increase in the share of firms reporting weaker activity in areas in property and, particularly, in consumer facing businesses. These results hint that the turn in consumer spending is still quite uneven.

A further pick-up in business levels in the next three months is now widely expected. As diagram 2 indicates, a comparison with the winter 2014 Index shows a relatively modest broadening of the recovery. However, with two-thirds of businesses planning to increase activity and only one in twenty cutting back, the upswing in the Irish economy is already very broadly based on the output side. 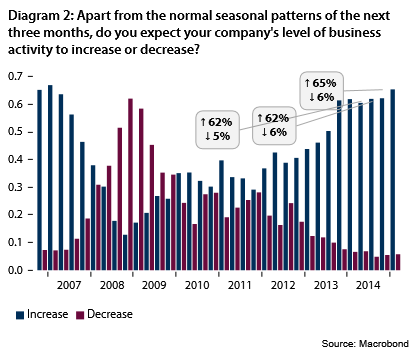 The continuing improvement in business conditions is prompting an ongoing healthy increase in employment as evident in the very strong jobs balance shown in diagram 3. As firms have tended to scale hiring in response rather than in anticipation of additional business volumes, the jobs balance has consistently lagged the output balance.  However, the increasing scale of the jobs balance indicates that firms are confident the persistence of strong business volumes will require additional headcount. 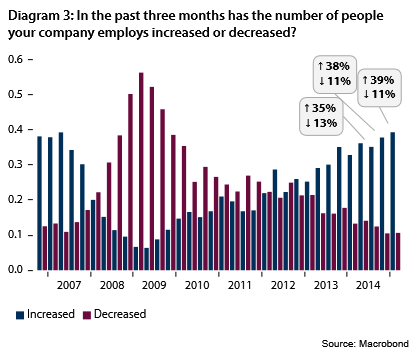 For the past six or seven years the pace of job growth has been largely determined by demand conditions. However, the spring 2015 survey contains at least tentative evidence that supply factors may now be starting to exert some influence on the pace of hiring. The survey contains a question asking if the availability of suitably qualified employees has increased or decreased in the past three months. As diagram 4 indicates, the number of companies reporting a decline in suitable job candidates has increased to its highest level since the autumn of 2006. This hints at a significant tightening of job market conditions in some areas of late. 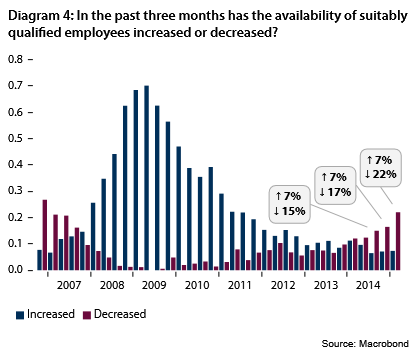 All sectors reported markedly positive jobs balances with companies in the food, other manufacturing and general business services areas reporting stronger hiring trends than in the previous quarter. In contrast, businesses in construction and consumer focussed areas recorded a marginally softer although still significantly positive jobs balance than three months ago. This likely reflects an easing from the pace of hiring seen in late 2014 when these sectors experienced a marked turn in activity levels. With the pace of business growth in these sectors also easing of late, this may hint that the turn in domestic demand is still restrained in some areas. However, consumer-focussed firms also reported an above average level of difficulty in finding suitably qualified job applicants.

The spring survey suggests little change in the cost environment facing Irish companies. At the margin, diagram 5 shows that the share of companies reporting higher input costs continues to edge upwards. This was most notable in sectors such as food and other manufacturing where a weaker exchange rate may be boosting the cost of imported inputs. Companies in the construction sector also indicated higher costs as that industry scales up activity levels. However, firms in the business services area and companies focussed on consumers reported some easing in cost increases of late. 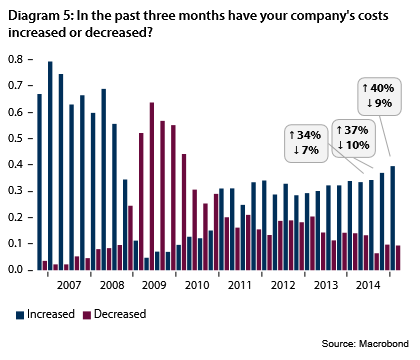 The broad message from firms’ assessment of their immediate operating environment in early 2015 is that a now well established upturn is continuing. However, the spring survey also suggests a more notable improvement in business confidence in relation to the broader Irish economy of late. Diagram 6 shows both a marked increase in positive assessments and an equally notable decline in negative views to the lowest level in the surveys eight and a half year history. 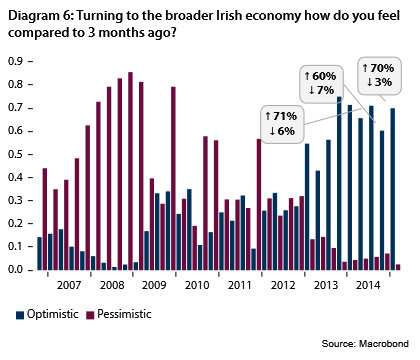 Uncertainty No Longer A Key Issue

The low-point in Irish GDP occurred in late 2009 but the turn in the interim has been very uneven and extended. We wanted to see if companies felt circumstances had changed to the point where conditions have returned to ‘normal’ or if they remained particularly risk averse. Diagram 7 suggests that Irish companies are now comfortable that uncertainty has diminished to levels that do not notably impinge on their business decisions. Indeed, many companies seem to have greater than usual ‘visibility’ at present. 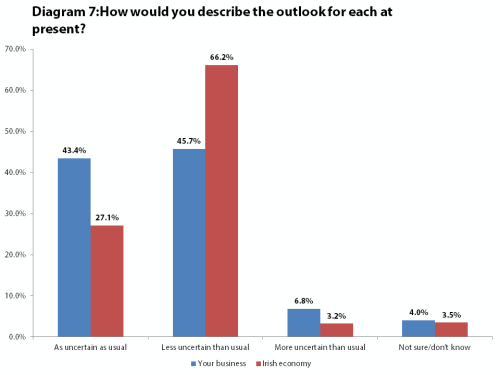 Just under half of those surveyed feel uncertainty in relation to the outlook for their business is lower than usual at present. This is nearly six times as many firms as feel that the outlook at present is more uncertain than normal.  Views on the broader Irish economy are even stronger. Roughly two thirds of companies feel the economic outlook is clearer than usual at present with only a negligible one in thirty three judging current economic circumstances to be more uncertain than usual. So, there appears to be a strong sense that Irish business feels the current strong trajectory of the Irish economy is set to be an enduring feature of their operating environment.

Concerns Vary As ‘New Normal’ Differs From Past Recoveries

We also asked companies where their major concerns lie at present. Probably the most notable aspect of diagram 8 is the diversity of the responses, with no single issue clearly dominating the current focus of Irish business. This might be expected in an economy where recovery has clearly taken hold and could even suggest that the overall degree of concern is easing. That said, the fact that inadequate demand emerged as the most frequently cited concern emphasises the still uneven nature of the turn in Irish economic conditions. 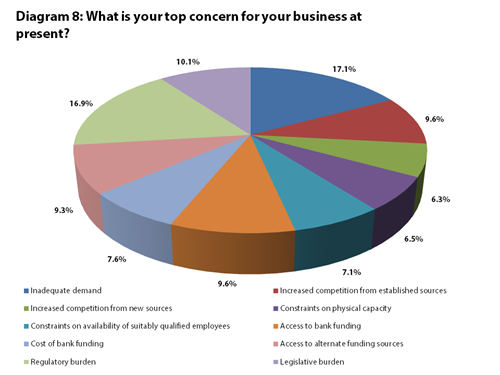 The broad message of the spring survey is that growth is becoming more widely established and is expected to improve further. However, the details also suggest most businesses remain very far from boom conditions or even from a position where they feel they can simply glide on the ‘tailwinds’ that would traditionally be felt in the upswing of the economic cycle.

With roughly one third of companies reporting flat or declining activity levels of late, it is not surprising that about one in six cited inadequate demand as their major concern at present. However, in response to a related question only one in seven companies indicated this concern had worsened in the past year while one in three indicated it had eased.

The importance given to an increased regulatory burden is consistent with answers given in previous surveys and emphasises how significant an issue the changed regulatory landscape is for business. Indeed, almost half of the companies surveyed indicated this concern had increased over the past year with only 1% noting it had eased. So, this suggests companies are having some difficulties adapting to the ‘new normal’.

Another element of this ‘new normal’ is increased competition which also figured prominently in these responses. This implies companies may not be able to fully ‘enjoy’ the improvement in their operating environment that might be expected to follow from an economic upswing. More than a third of companies suggested competition had intensified in the past year- around ten times the number that suggested it had eased.

We asked companies what impact the weaker exchange rate of the Euro was having on their business. Before discussing the responses, it should be noted that the 62% of companies in the survey are focussed on the domestic market. Moreover, the weakening of the euro on FX markets is a relatively recent phenomenon and many of the exporting companies likely to be affected by FX movements would have hedging strategies in place that reduce the impact of such volatility. 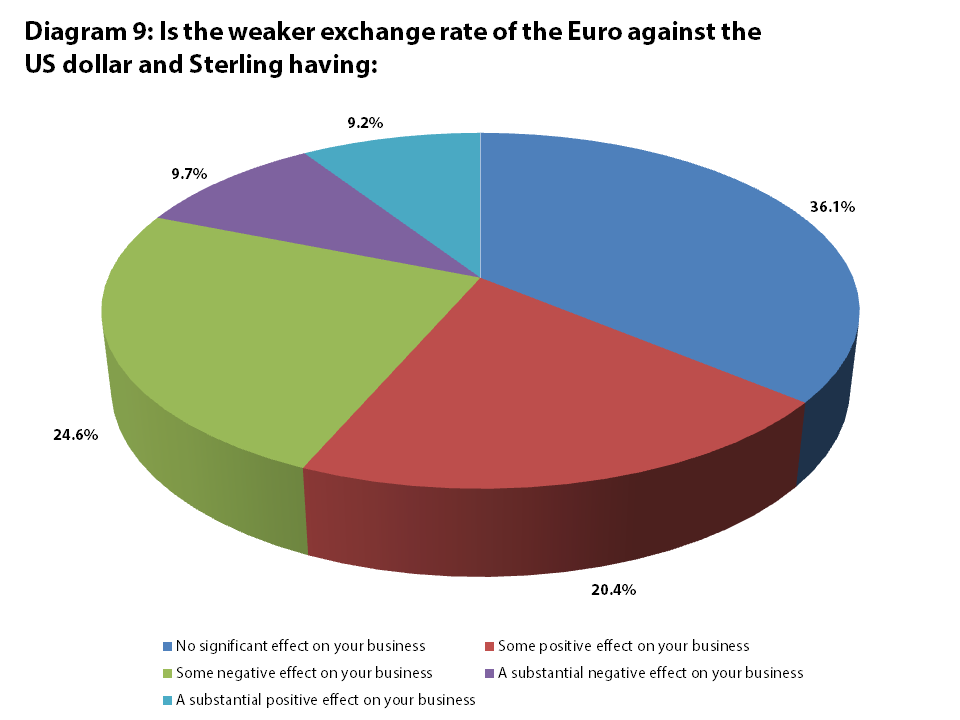 These factors are likely to contribute significantly to the perhaps surprising result that slightly more companies (34%) regard the weakness of the Euro as having a negative effect than see it having a positive effect (29%). In general, food and other manufacturing companies regard a weaker currency as positive although significant numbers emphasise negative aspects presumably reflecting the sourcing of some inputs from the US and UK or the translation of their earnings into these currencies. Construction and consumer focussed companies emphasised negative aspects that likely reflect an associated increase in costs. So, the survey indicates that the net impact of exchange rate movements on the Irish economy is the balance between two much larger and opposite effects that are felt in different way across various sectors of the economy.

Political Uncertainty Not A Major Problem

We also asked companies whether political uncertainty ahead of the general election was currently a concern for them. The results set out in diagram 10 show the majority of companies do not see this as a significant concern at present.  The companies that saw it as some or a substantial concern tend to be domestic facing rather than export focussed. This might suggest that business worries about Ireland’s image abroad are reasonably limited but there is some small measure of concern that political uncertainty might act to constrain or postpone some element of domestic spending. As a result, it might be suggested that any concerns corporate Ireland may have in relation to political certainty relate to the distraction it might cause rather than any disaster it might threaten. 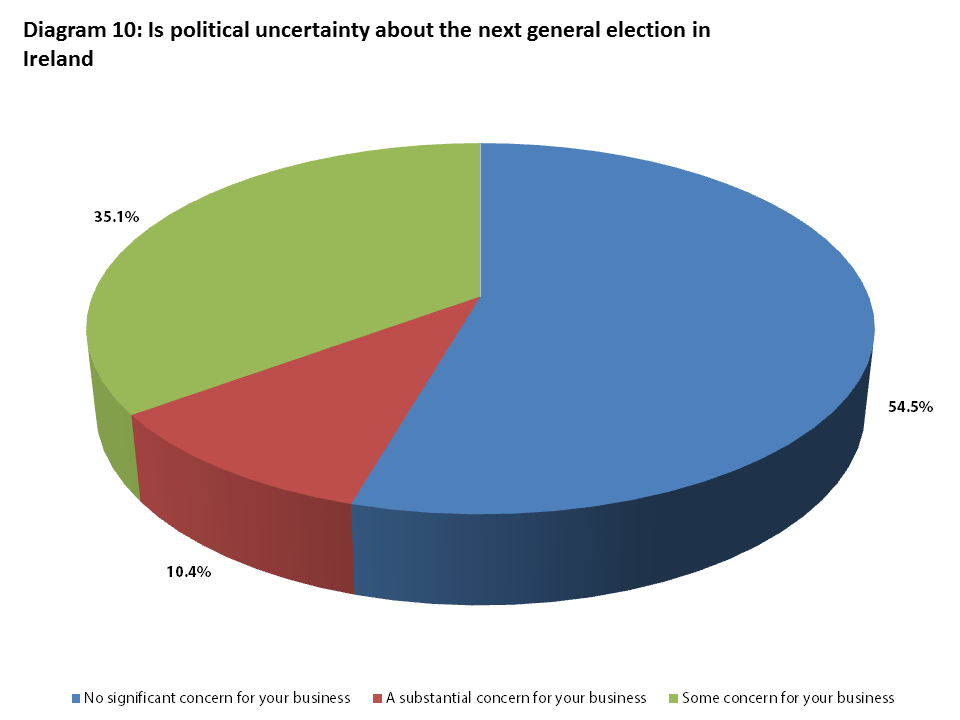