Improvement in Irish consumer sentiment a small light in a dark tunnel?

Consumer confidence improves somewhat in May after collapsing in April

Special question finds 86% of consumers expect austerity in coming years. Could this limit the recovery?

Irish consumer sentiment showed a significant improvement in May following the Covid-19 related collapse in confidence in April. The KBC Bank Ireland Consumer Sentiment Index jumped to 52.3 in May. The 9.7 point monthly increase in May is the largest month-on-month improvement since January 2015 but it has to be seen in the context of a twenty four year series record 34.7 point drop in the index in April.

While the improvement in sentiment between April and May should be seen as encouraging, the level of the May sentiment survey remains comparable with responses seen through the more difficult moments of the financial crisis and is within the lowest 5% of readings in the survey’s twenty four year history.

A special question asked in conjunction with the May survey found that 86% of consumers expect the Irish government to introduce cutbacks in public spending and/or tax increases within the next two to three years.
The threat of a return to austerity could prompt Irish consumers to adopt a more cautious approach to spending as health related restrictions are eased which would leave the Irish economy on a weaker recovery trajectory than would otherwise be seen and result in a permanently lower path for employment.

Have we reached the bottom?

Our sense is that the improvement in consumer sentiment in May largely reflects the announcement through the survey period of the Government’s  plan for a phased exit from ‘lockdown’ measures coupled with similar movements in other countries and allied to some easing in adverse health outcomes and associated risks.

It appears that these positive recent developments outweighed evidence of a sharp worsening of job market conditions of late and a series of high profile reports highlighting a prospectively large and lasting economic and financial damage from the Covid-19 pandemic. The increase in the Consumer Sentiment Index in May is encouraging in that regard in that it suggests an overwhelming fatalism hasn’t taken hold that might make Irish consumers only responsive to negative newsflow.

The improvement in Irish consumer sentiment in May coincided with a pick-up in the preliminary reading of the closest comparable indicator for the US. However, the details suggest significant differences in the drivers of the increase in confidence. In the US, the rise appears to owe more to the relief afforded by exceptional government income support measures in an economy where ‘automatic stabilisers’ are more limited while American consumers became even more negative about the future.

While the improvement in Irish consumer sentiment in May was reasonably broadly based, it was particularly focussed on forward-looking elements of the survey. Perhaps surprisingly, the gains were most pronounced in relation to the broader economic outlook and prospects for jobs. Our judgement is that two contrasting considerations may have played a role in these particular results.

On a positive note, the sense that a phased easing of the lockdown is now planned together with progressive signs that health outcomes were moving in a less negative direction through the survey period may have encouraged a little more optimism in these forward-looking ‘macro’ elements of the survey.

However, it should also be recognised that Irish consumer thinking on the prospects for economic activity and jobs remains extremely weak (as the diagram below indicates) and it could be argued that some element of the change between April and May simply reflects a view that the scale of deterioration in Irish economic circumstances that occurred in April means that some consumers believe conditions could not get any worse on a twelve month outlook.  As a result, flattering ‘base effects’ may have contributed to the improvement in the May reading. 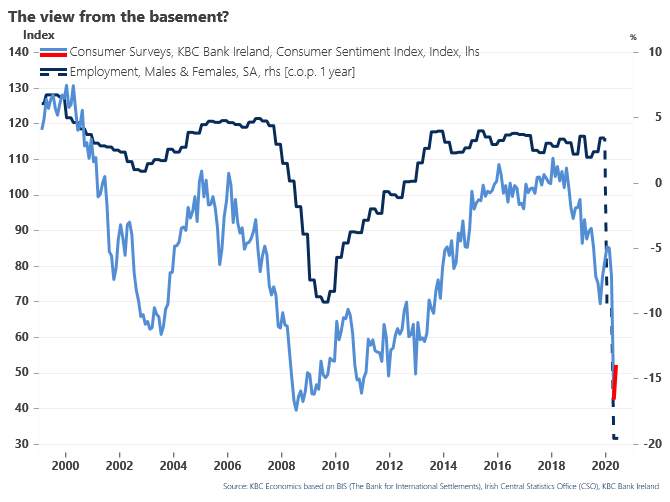 If the May sentiment survey might suggest that the Irish economy is now at or close to bottoming out, that is not to imply that consumers expect any marked upswing anytime soon. Instead, even if we have moved beyond peak pessimism, concerns remain deep-rooted. Whereas, nine out of ten consumers expected the economy to weaken in the following twelve months in April, the overwhelming majority, albeit eight out of ten, remained of that view in May.

Similarly, the proportion expecting unemployment to worsen through the coming year, at two out of three in May, was significantly down but not substantively different from the three out of four expressing this view in April. On a number of occasions in the past, we suggested that consumers' responses to the employment element of the sentiment survey should be regarded as qualitative measures of thinking on the health of the jobs market rather than a quantitative pointer in relation to the unemployment rate.

Clearly with underlying unemployment now put at 28.2% of the labour force, the inference that joblessness could be higher in a year’s time would imply an exceptionally negative assessment of Irish economic prospects. However, our reading of the jobs element of the May results is that they simply suggest a widespread expectation of a lasting and severe weakening of job market conditions in tandem with protracted difficulties for the economy as a whole.

The only element of the May survey to post a weaker reading than April was consumers’ assessments of how their household finances had evolved through the previous twelve months. Given the traumatic and widely felt hit to incomes (and asset values) in recent months the finding in May that just 3% of consumers felt they were better off than twelve months ago while 39% felt they were worse off is not entirely surprising.

The sense that we may be at or near the low point of the current episode might be inferred from a marginal improvement in consumer thinking in relation to the outlook for their household finances where numbers expecting a further deterioration in living standards dropped to about four in ten from five in ten in April. In the same vein, a clear easing in negative responses prompted an improvement in the buying climate in May.

Whether the pick-up in consumer sentiment in May proves short-lived or points towards the start of a recovery in confidence is nearly impossible to know at this juncture as sentiment will depend both on the path of the virus and the path of the Irish economy. In relation to the latter, the nature and extent of policy interventions could play a central role.

And now for austerity?

While the immediate focus of policy has rightly been on measures to limit the blow to incomes, discussion is increasingly turning to the future stance of Irish fiscal policy both through an immediate recovery period and thereafter. In circumstances where there is a clear lack of consensus among economists and possibly among politicians, there tend to be opposing views either emphasise that fiscal policy should now turn to stimulus measures to assist a move from lockdown to lift-off or, alternatively, should instead begin to focus on future ‘austerity’ actions to limit the shortfall in the public finances.

We previously produced several pieces (here, here and here) setting out a view on the need to act to limit prolonged weakness in demand that could translate into a permanent weakening of Irish growth prospects and a related worsening of the public finances. However, we felt it might be useful to assess the current thinking of Irish consumers as to what future direction Irish fiscal policy might take. 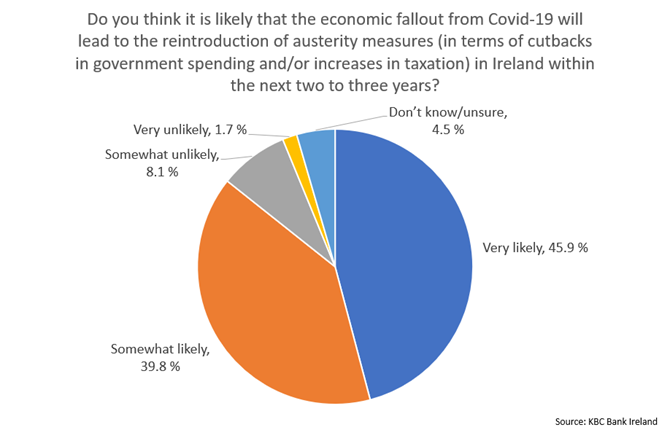 Alongside the May sentiment survey, we asked a supplementary question, ‘Do you think it is likely that the economic fallout from Covid-19 will lead to the reintroduction of austerity measures (in terms of cutbacks in government spending and/or increases in taxation) in Ireland within the next two to three years?' Responses to this question are set out in the chart above.

As can be seen from the chart, the overwhelming view held by 86% of Irish consumers is that some element of austerity measures will be implemented in coming years, with more than half of this group taking the view that such measures are very likely. We would emphasise that responses to this question should be seen in the context of the current depressed level of the Consumer Sentiment Index rather than the movement in the index between April and May.

If Irish consumers take the view that tighter fiscal policy will come before long, the risk is that they will adopt a more cautious approach to spending, thereby restraining the pace of recovery.

The rationale for such behaviour was first outlined nearly two hundred years ago in the theory of Ricardian Equivalence that argues consumer spending is determined by perceptions of lifetime incomes. In current circumstances where expected income is at very least more uncertain if not reduced in the wake of the pandemic, the prospect of additional taxes or less support from government spending in the future could cause consumers to restrain spending and increase precautionary savings, thereby reducing the recovery in consumption-related jobs.

Ireland has often been held up as an example where in the past confidence around improved fiscal sustainability supported consumer and business confidence and meant that austerity measures ‘worked’. There may have been little option but to take significant action to restore order to the public finances following the global financial crisis (in circumstances where the stance of the ECB was markedly different to today). However, as the diagram below illustrates, the impact of austerity measures on Irish employment and consumer spending is readily seen in a comparison of the period of fiscal tightening and the period of modest stimulus that followed it when austerity stopped.

In circumstances where there were no major imbalances in any of the traditional metrics of Irish economic performance prior to the pandemic, where global financial markets are altogether more preoccupied with growth prospects than universally seen fiscal deficits, it would seem particularly unfortunate if the Irish public and policymakers scarred by the global financial crisis acted in a manner that materially increased the risk of much greater scarring in the future through a legacy of much lower activity and employment than could otherwise be the case. Instead as the German member of the ECB’s directorate recently tweeted, ‘The best way to reduce the public debt burden after the crisis is to strengthen economic growth.’ (Isabel Schnabel @IsabelSchnabel, May 11, 2020) 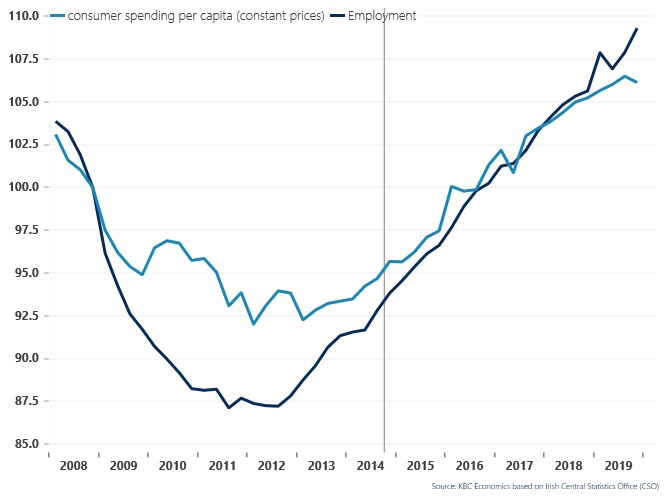