Significant variations in holiday affordability and spending plans by age, education and gender

Although the focus of many Irish consumers has now shifted from Summer to school or possibly even Christmas, it may be useful to assess what holiday spending by Irish consumers in 2019 says about the current state of the Irish economy.

Spending on holidays only accounted for about 6% of household spending in 2018 but last year it grew by 10.8%, twice as fast as the overall increase in consumer spending. The discretionary nature of holiday spending means it may provide some useful pointers as to the strength and spread of consumer spending power in the Irish economy in mid-2019.

As part of the KBC consumer sentiment survey for July, we asked consumers how much they were planning to spending on their ‘main’ holidays this year compared to a year ago.  The responses to this question suggest two significant findings to us:

Some 69% of Irish consumers say they plan to take a significant holiday in 2019.  Of the remaining 31%, the vast majority (22%) say they cannot afford to take a holiday. The remaining 9% cited other unspecified reasons for not going on holiday. As official data indicate that on average Irish people take two holidays per year, the survey suggests that those who take holidays take three holidays each on average while more than one in five Irish people don’t take any holiday because of financial constraints. 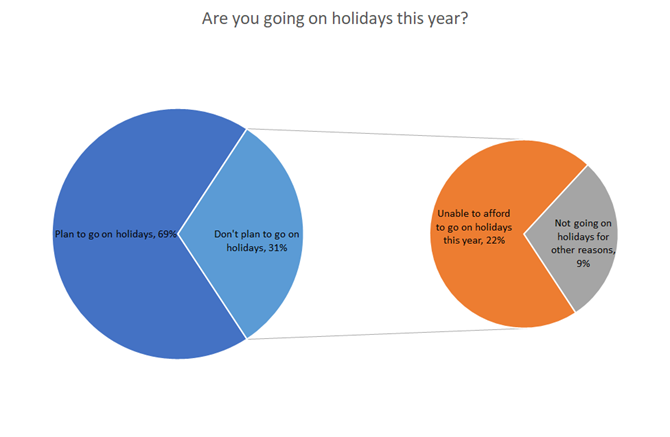 The demographic breakdown of those not taking a holiday paints a consistent socioeconomic picture;

Of those Irish consumers taking holidays in 2019, most plan to spend around the same as last year.

As usual, responses to the survey capture the views of a range of consumers. However, overall holiday spend will also be boosted by an increase in the number of consumers. It should also be noted that the survey responses on average holiday spend don’t differentiate between domestic and foreign spend. However, even with those caveats, this survey suggests 2019 may be a steady rather than spectacular year for those businesses dependent on the domestic tourism market in Ireland. 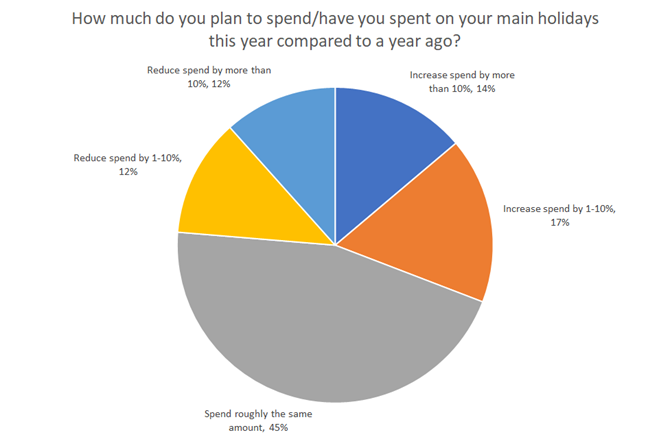