Irish growth data for the final three months of 2011 were broadly as expected.  As usual, a number of largely technical influences had an outsized impact on the difference between GDP and GNP in particular and also on quarterly changes in several aggregrates.  That said, the broad picture emerging is one of continuing weakness in the economy as a whole.  Importantly there are also signs that a long-drawn out stabilisation process is progressing.  As diagram 1 indicates, a fairly consistent picture is now emerging both from GDP/GNP data (which we smoothed because of their inherent volatility) and from employment numbers.  The Irish economy appears to be past the worst of the downturn but important headwinds in the shape of an uncertain global backdrop, continuing budget austerity and deleveraging by businesses, households and banks preclude a ‘normal’ recovery.  The likelihood is that this bottoming out process will continue through 2012.

Importantly, in terms of international sentiment, today’s data confirm that 2011 saw positive, if modest, growth in GDP for the first year since 2007.  They also imply the General Government Balance for last year was in the region of 9.7% of GDP, comfortably below target.  In this regard, today’s data suggest a notably less negative trend is emerging for Ireland than is evident in either of the other assistance programme countries or several other ‘troubled’ Eurozone economies.

Today’s release contains data for the final quarter of last year and a tentative estimate for 20011 as a whole.  For ease of ease of exposition, we analyse each of these separately.

Irish GDP fell by 0.2% between the third and fourth quarters of 2011, a slightly smaller decline than the 0.3% drop recorded for the Euro area as a whole and markedly better than the outsized declines seen in Portugal (-1.1%) or Greece (we estimate a roughly 5% quarter on quarter decline in Greek GDP on a seasonally adjusted basis).  In the light of notably weaker conditions across Europe, the open nature of the Irish economy means the 4th quarter decline is not surprising.  However, some of the details are slightly more encouraging.  A sharp reversal in stockbuilding was the main reason for the drop in GDP compared with the third quarter.  Surprisingly, final domestic demand increased by 1.7% between the third and fourth quarters, the largest of only five quarterly increases seen in domestic spending since the first three months of 2007.  We would downplay any suggestion that this points to a marked improvement in domestic economic conditions.  After very poor weather a year earlier and seismic changes in recent years, seasonal adjustment processes can be overburdened.  However, the fact that both consumer spending (+0.5%) and construction (+2.4%) recorded gains, in the final three months of 2011 points at least tentatively towards some broad stabilisation in domestic activity that is consistent with a modest improvement in employment.  That said, we expect ongoing budget austerity to lead to some further weakening in domestic spending through 2012. 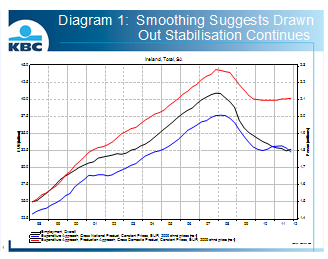 The better than expected domestic spending performance in the final three months of 2012 was broadly offset by a slight decline in exports (-1.1%).  That was slightly poorer than the trend suggested by monthly trade data for this period and could reflect timing issues that might suggest scope for an improvement in exports in the first quarter of 2012.  Consistent with a more cautious stance on the part of exporters, the drawdown in inventories was accompanied by a decline in imports (-1.0%)  Notwithstanding the easing in exports, there was a marked pickup in income outflows (although, in contrast to the seasonally adjusted outturn, raw non-seasonally adjusted figures show a markedly less negative picture as outflows declined and inflows increased).  The poorer seasonally adjusted net factor flow data translated into a sharp decline in GNP (-2.2%) in the final quarter.

Our broad take is that the 4th quarter data show tentative signs of stabilisation albeit at relatively weak levels.  A more pessimistic interpretation might emphasise a second consecutive quarterly decline in GDP.  As we noted on several occasions previously we don’t think the shorthand definition of a recession as two consecutive quarters of declining GDP is appropriate for Ireland given the volatility in these data.  We think that the composition of the change in GDP and the fact that numbers at work rose in the final three months of last year argues against a fatalistic interpretation of today’s data even if significant impediments to recovery need to be emphasised.

Today’s numbers also contain preliminary estimates for the full year of 2011.  These show GDP improved for the first time since 2007.  The 0.7% increase has to be set against a cumulative decline of 10% between 2007 and 2010 but emerging signs of even a tentative improvement in the headline figures may inform international opinion.  Importantly, as it is the denominator in key metrics such as the General Government Balance and national debt ratios, the fact that there was a marginal rise in nominal GDP in 2011 in a year of major budget adjustment should support current financial market sentiment that Ireland is set on a healthier future growth trajectory than several other ‘troubled’ Euro area economies.

For the year 2011 as a whole, exports were the sole driver of positive GDP growth.  All the other main categories of spending posted further declines.  Domestic demand fell by 4.1% last year as a severe budget adjustment depressed spending power.  This key barometer of domestic activity has declined by a cumulative 23% since its 2007 peak, an outturn that is entirely consistent with a roughly 15% decline in Irish employment over the same period.

We expect export growth to ease slightly to around a 3 per cent pace in 2012 but because we envisage a notably more modest decline in consumer spending (-2.0% v -2.8%) and in construction output (-6.0% v -13.5%), we think a smaller decline in domestic demand will compensate for a good deal of the impact of more restrained export growth.  As a result, we expect Irish GDP growth will be around 0.3% in 2012.  Because we expect some ‘normalisation’ of the impact of factor flows, we think GNP growth will be around -0.5%.  We also expect a return to a more usual positive trend in the relevant price defaltors.  So, we see nominal GDP rising by about 1.3%, an outturn that would suggest budget targets can continue to be met.

Today’s Irish growth data broadly underline the scale of the adjustment seen in the Irish economy in recent years GDP is back at 2005 levels while GNP, like employment, is back to the levels of 2003. They also accord with other recent evidence suggesting a drawn out process of stabilisation is progressing. The details confirm the 'Jekyll and Hyde' nature of the Irish economy at present with solid export growth offsetting severely pressured domestic spending.  Not surprisingly, the fourth quarter data show some adverse impact on Irish exports from a more uncertain global climate but they also suggest tentatively that the marked decline in domestic spending may be close to bottoming out.  As a result, they hold out the prospect that 2012 should see marginal positive growth for the Irish economy as a whole as a slightly less supportive export performance is broadly offset by a slightly less negative trend in domestic spending.  Such an outturn should underpin the market view that Ireland’s adjustment is notably further advanced and its economy is inherently stronger than is the case for many other ‘troubled’ economies.