GDP rises by 4.2% on a quarterly basis to stand 10.5% higher than a year earlier

Headline GDP growth likely to be around 6.5% in 2017but underlying growth closer to 4%

New data show Irish GDP increased by 4.2% in between the second and third quarters of 2017 (an annualised rate of 18.1%!!!). The year on year increase in GDP in the third quarter is 10.5%, the fastest increase since late 2015. Even allowing for some correction in the final quarter of the year, it now seems that for 2017 as a whole, GDP growth will be about 6.5%.

While conditions in the Irish economy are improving at a robust rate, these national accounts growth metrics are unrepresentative of the circumstances facing the majority of businesses and households. As such, they should not be seen as signalling anything approaching a return to ‘boom’ conditions. Instead, as diagram 1 illustrate, think healthy increases in consumer spending are more typical of current conditions than ‘white hot’ increases in GDP. 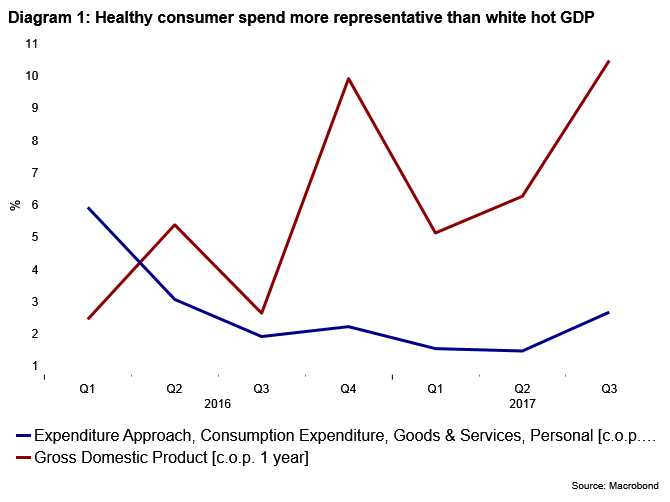 Today’s numbers are heavily coloured by the scale of multinational activities connected to the Irish economy and the size and unpredictability of swings in various aspects of these activities.  We reckon that the underlying growth rate is probably in the region of 4% in 2017, a strong but less spectacular performance than implied by today’s GDP numbers.  Such an outturn would also be broadly consistent with the pace of employment growth which was 2.9% in the first half of the year.

The third quarter saw a strong 1.9% three month rise in consumer spending that, together with increases of 2.3% in construction spending and 2.1% in Government consumption spending, highlight solid momentum in domestic spending (the corresponding annual increases were 2.7%, 7.1% and 2.1%). As a result, final domestic demand excluding multinational related activities (the economic aggregate that corresponds most closely to the environment relevant to the majority of firms and consumers) is expected to grow by about 4% for the full year.

The pick-up in Irish GDP growth in the third quarter was primarily driven by an acceleration in export growth to a quarterly increase of 4.4% from 0.8% the previous quarter. In turn, this appears to reflect an upswing in ‘contract manufacturing’ that likely relates to increased overseas production of new product ranges rather than notably higher domestic output.

The third quarter also saw a dramatic 36% quarterly drop in overall capital spending primarily related to a sharp drop in spending on intellectual property (IP) which tends to be very ‘lumpy’. As these transactions usually entail purchases from abroad, they are also reflected in imports which saw a corresponding 10.9% drop in the third quarter. Similarly, a drop in activities related to aircraft leasing weighed on both the headline investment and import numbers.

Importantly, the import-intensive nature of these IP and aircraft leasing activities meant sharp changes in these areas had no material impact on the reported GDP growth rate for the third quarter. However, the divergence between exports and imports led to a staggering balance of payments surplus of 18.7% of GDP in the third quarter.

A stronger measured GDP growth rate in 2017 is unlikely to materially affect the Government deficit to GDP ratio but it could pull the debt to GDP ratio down by about 1.5 percentage points to about 68.5% of GDP at end 2017. It may also amplify longstanding technical difficulties in measuring Ireland’s potential growth rate which informs important EU metrics related to the ‘structural’ position of the Irish public finances.