According to the Central Statistics Office, Irish house prices rose sharply in February (+1.5%*) to raise the annual rate of property rice inflation to 10.7%, the highest rate since May 2015. The increase was broadly based and, as the diagram below illustrates, a relatively sharp acceleration in Dublin property price inflation of late has been accompanied by a rebound in price inflation outside the capital towards the peak rates seen in late 2014. The official February price data confirm a range of other indicators suggesting the Irish property market is heating up at present. 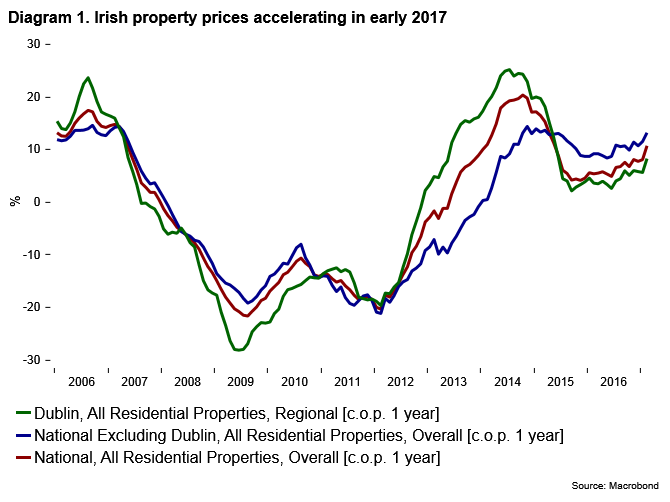 The 1.5% monthly rise in Irish property prices in February is exceptionally strong when seen against a strong seasonal tendency towards particular weakness in prices in February. In both 2015 and 2016, February showed the largest monthly price drop of the year and month on month falls in housing prices have been recorded each February since 2008.

The primary reason for the momentum in Irish property prices at present is the imbalance between strengthening demand and struggling supply. Robust and now broadly based jobs growth is causing pent-up housing demand of the past seven or eight years to crystallise while new building is currently less than half the levels required to meet ‘normal’ demographic demand (for some sense of the pipeline of prospective demand for housing, see the recent KBC Homebuyer Sentiment Survey here).

If the primary reason for rising prices is a fundamental imbalance of new demand and supply, policy measures have been a notable amplifying factor of late. As is normally the case with asset prices, the impact of policy shifts tends to be reflected in property prices relatively quickly. There is little question that the ‘announcement effect’ of the government’s ’help to buy’ scheme has run ahead of the actual drawdown of the associated funding. Moreover, it is likely that the market had absorbed most of the restraining influence of the Central Bank’s initial imposition of lending limits when some easing in these limits was announced last November. The announcement effect of lending limit changes might also have had a speedy on market pricing.

To the extent that the current momentum in prices reflects the ‘step-up’ effect of policy changes, some easing in Irish housing price inflation might be envisaged later in the year. As February property prices are now 6.7% above their average 2016 level, even fairly limited further increases through the remainder of the year would translate into robust property price inflation of about 8% or more for the year as a whole, meaning double digit average price growth is readily possible. However, an easing in the current impact of policy changes, some improvement in supply and affordability constraints could produce a clear moderation in Irish property price inflation through the course of 2017 towards more sustainable rates by end-year.

* The fact that both Dublin (+1.3% m/m) and rest of Ireland (+1.1% m/m) are below the aggregate increase of +1.5% m/m reflects statistical smoothing procedures. As the CSO notes: 'Aggregate indices are compiled using the unadjusted sub-indices and then smoothed independently. As a result these higher level indices may, in some periods, show slight deviations from their published constituent sub-indices. '