Analysing end-2016 exchequer returns is a job for a two handed economist. On one hand, today’s numbers emphasise just how much progress has been made in restoring order to Ireland’s public finances in recent years. As the diagram below indicates, the reduction in the deficit to less than 1% of GDP in 2016 represents a remarkable achievement. At the same time, the details of today’s figures also hint at some soft spots in the recovery and pressures to ramp up public spending that mean 2017 will see continuing strains on the public finances as the Government  attempts to strike a balance between the prudent and the politically feasible.

Today’s data suggest the General Government deficit for 2016 (which encompasses the broader Government sector and, consequently, is used for international comparisons) could be marginally lower than the official estimate of 0.9% of GDP. We think a deficit of about 0.7% of GDP could be envisaged, less than half the 2015 figure of 1.9% of GDP. More importantly, the diagram below puts this year’s out-turn  into context and testifies to the exceptional (and painful) progress made in restoring order to the public finances in recent years. 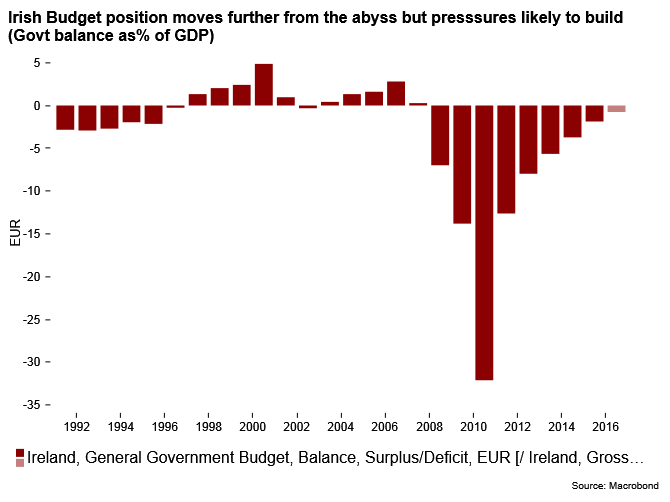 The detailed tax receipts in today’s Exchequer data suggest that the domestic recovery is continuing but it remains uneven. For the year as a whole, tax revenues increased by €2,263mio or 5% with decent gains for most headings. However, there are signs of a softer trajectory in the receipts for December alone. Tax revenues for the month of December were €151mio lower than envisaged and €449mio lower than a year earlier. While anticipated repayments of corporation taxes were an important element, this result also reflects the continuation of persistent softness in VAT and weaker momentum in most key headings last month than at the end of 2015. In this respect, today’s figures warn of potentially important constraints on the growth of tax revenues in 2017. While today’s figures are consistent with continuing job gains, they also highlight a more cautious consumer who may be switching more of their spending power online and out of the jurisdiction.

The December returns also reflect a very lumpy increase in Government spending in December that reflects the unhelpful and unintended consequences of the new fiscal rules. Up to November, voted exchequer spending was running some €799mio below profile but the full year figure reveals a small overspend of €142mio. This bunching of spending is neither likely to be effective or desirable but the fear of breaching the expenditure benchmark encourages both the delayed release of outlays and their full use- to boost the benchmark for spending in the following year.  The scale of this increase set against notably larger emerging demands on the public purse raises the prospect of difficult discussions ahead of Budget 2018.

In broad terms, today’s exchequer returns are encouraging in the sense that they show a sustained improvement in the fiscal position that stems from the Irish economy’s current solid growth rate present as well as the painful measures implemented through a long and difficult adjustment process. However, the details also testify to emerging pressures on public spending as well as some potential soft spots in consumer spending that mean balancing economic, social and fiscal progress will remain challenging in the coming year.