The Irish jobs market remains on a strong path

The Irish jobs market remains on a strong recovery path with the pace of increase in employment showing a notable acceleration in the final quarter of 2017. Numbers at work were 66,800 or 3.1%% higher than a year earlier, a sharp pick-up from a 2.2% pace of growth recorded in the third quarter.

The seasonally adjusted increase in Q4 from Q3 was 1.3% (5.4%% on an annualised basis) which is the fastest quarterly increase since Q4 2006, implying the Irish economy finished 2017 on a particularly strong note.

Overall, these data suggest the recovery in the Irish economy is continuing to build momentum. While we think that the particular strength of the Q4 data in part reflects a correction from softer jobs growth in the previous couple of quarters, an average increase in employment of 2.9% for 2017 is indicative of particularly strong economic conditions.

Diagram 1 below gives some sense of the scale and speed of the turnaround in the Irish jobs market since the crisis. Employment has now increased in each quarter for the past 21 quarters. As a result, numbers at work in the Irish economy are now some 377k above the 2011 low-point and now just 12k below the previous 2007 peak. This has led to a drop in the unemployment rate from a peak of 16% in February 2012 to an estimated 6.1% in February 2018.

The strong end to 2017 implies a significant carry-over effect that will support the rate of job growth for 2018. Our expectation is that employment in the Irish economy will increase by about 3% this year as the outlook for activity both domestically and internationally remains quite positive and should be supportive of further meaningful increases in numbers at work in most areas of the economy. 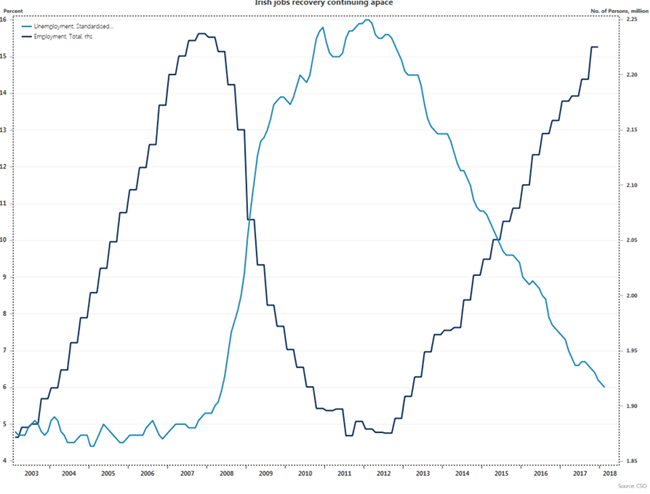 Could the Irish jobs market be getting too ‘hot’ or is it still cool?

The sustained strength of forward momentum in the Irish jobs market in the past couple of years has started to trigger debate as to whether we might be approaching conditions that would threaten overheating and put the Irish economy on boom to bust trajectory. In light of recent history, this is a possibility that must be taken seriously but it is important to consider whether risks in this regard are entirely skewed in one direction.

As diagram 2 indicates, the current pace of growth in employment in the Irish economy at  3.1% y/y remains some way faster than that in either the US (+1.5% in the latest three month period to February or the UK (+1%). However, this partly reflects, the exceptional scale of job losses through the downturn. The latest unemployment rate in the US at 4% is the lowest since late 2000 and has only been lower than this in six months since 1969. Similarly, while the UK jobless rate has ticked up to 4.5% from 4.3% in September, the latter was the lowest rate recorded since May 1975.

The current pace of Irish jobs growth is also stronger than the EU area average which posted an increase of 1.5% for the 4th quarter of 2017 in numbers also released today. However, Eurostat reports that five of the 28 EU countries are posting a faster pace of jobs growth than Ireland at present. Moreover, the Irish unemployment rate now estimated at 6.2% for January 2018 was higher than that in 14 other EU countries.

These comparisons suggest the current trajectory of the Irish jobs market while strong is not entirely exceptional and, consequently, suggests that, with the appropriate policy settings, there may be scope for robust increases in employment to continue for some significant time without triggering a significant risk of overheating.

A key feature of the Q4 numbers is a sharp 1.8% increase in the labour force that suggests significant potential for new entrants to the workforce from at home and abroad to increase the level of employment without triggering any threatening rise in wage pressures. In this context, while it has eased notably, Ireland’s current unemployment rate of 12.2% for under 25’s emphasises the point that risks should not be regarded as entirely one-sided in relation to the outlook for jobs.

As the diagram shows, the collapse in construction employment means that even after notable gains in the past couple of years numbers at work in this sector are still 43% below 2007 levels. If the Irish jobs market entails fewer bricks, it is one of notably more ‘clicks’. In stark contrast to construction, employment in Information and technology areas is now some 33% above its 2007 levels having seen a relatively modest and short-lived downturn during the crisis.
Both IT and construction now account for broadly similar shares of numbers at work (at around 5 1/2% of those employed), whereas in 2007, there were 3 times as many jobs in building as in IT.

The diagram also shows notable increases since 2007 in employment in Education (+20%) and Health (+16%) in response to demand pressures in these areas. A significant rise in employment has also been seen in Accommodation and food services (+18%) where the increase in numbers at work has run ahead of the growth in overseas tourism revenues.

The recovery in Irish employment while substantial is still a work in progress in as much as employment levels are still below those of 2007 in 7 out of 14 sectors. Marked reductions in areas such as admin& support services(-5%) and wholesale/retail/motor trades (-9%) could reflect a ‘hollowing out’ of employment opportunities as a result of various aspects of technological change. Such changes and increasing competition may also be contributing to a somewhat smaller decline in jobs in industry (-5%).

The nature and extent of these structural changes mean we need to be careful not to adopt overly simplistic assessments of Irish economic capacity and potential from the trend in jobs and unemployment. 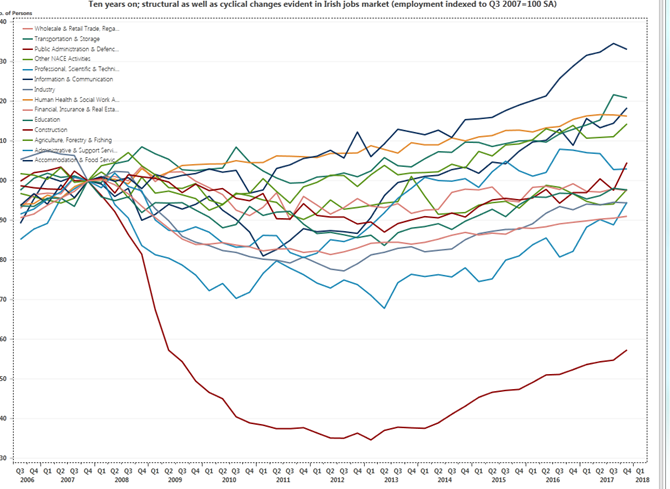