Significantly earlier than had been envisaged, the European Central Bank today announced the outcome of its Strategy Review of its Monetary policy. As expected, the alterations announced are evolutionary rather than revolutionary and, to a significant extent reflect the reality of a low inflation, low interest rate world at present, a set of circumstances not envisaged when the ECB last reviewed its strategy back in 2003. Perhaps wishfully thinking of a less strained future environment, the ECB also indicated the next Strategy review will take place as soon as 2025.

In practical terms, the review is likely to further underpin the already strong market consensus that ECB policy rates will remain ‘lower for longer’, notwithstanding ECB presidents’ rejection of  a press conference question suggesting that prospect. Indeed, on a mechanistic interpretation of this shift in target, the case might be argued that the ECB might even be required to step up its easing stance in upcoming meetings.

Looking  (much?) further ahead, the shift to a target rate of inflation of 2% from the current ‘below but close to 2%’ would imply a somewhat higher neutral policy interest rate. Moreover, the proposed inclusion of a further element of housing costs into the target measure would likely imply a marginally larger range for ECB policy rates through the cycle given a pronounced tendency for greater volatility in housing costs than in most other categories of consumer purchases.

The ECB also acknowledged that in circumstances of a structural tendency towards low interest rates at present, the need to supplement interest rate policy with unconventional instruments such as forward guidance, asset purchase programmes and Targetted Long Term Refinancing Operations meant these would now form part of the ECB‘s normal toolkit although Mme Lagarde emphasised that policy rates would remain the primary policy instrument and the other elements as set out above were listed in their ‘pecking order’.

The same forces on the interest rate environment also translated into a willingness to implement an ’especially forceful reaction or a persistent reaction’ to significant disinflationary forces. This in turn could  result in outcomes entailing ‘a transitory period in which inflation is moderately above target. temporary While the ECB would tolerate such outcomes,  it also clearly signalled a determination not to follow the US Federal Reserve which in its recent review opted for average inflation targeting, entailing previous inflation under or overshoots would be taken into account in framing the policy stance.

The decision by the ECB to switch to a ‘symmetric’ target of   ‘two per cent inflation over the medium term’ was widely expected and while ECB president, Christine Lagarde, argued that the previously framed target of ‘below but close to 2%’ had been seen as something ’probably close to 1.95% by the ECB, the reality is that figure hadn’t been signalled and market thinking had largely focussed on a range for the ECB’s inflation target between 1.7% and I.9%. So, at the margin, this implies policy will aim at a somewhat higher target, which suggests a ‘lower for longer’ rate environment.

Of course, alterations to the ECB’s policy target rate can only be assessed in the context of its revealed capacity or otherwise to  hit that target . As the diagram below illustrates, headline Euro area inflation ran slightly above the ECB’s previous target (which for the purposes of the graph, we put at 1.8%) and broadly in line with a 2% target up to 2014. However, since then, and for the foreseeable future on the ECB’s latest projections, inflation has progressively fallen short of the current target, meaning the new target implies a somewhat greater divergence to be overcome in the years ahead.  In turn, this might underpin current market expectations that a prolonged period of low ECB policy rates lies ahead. 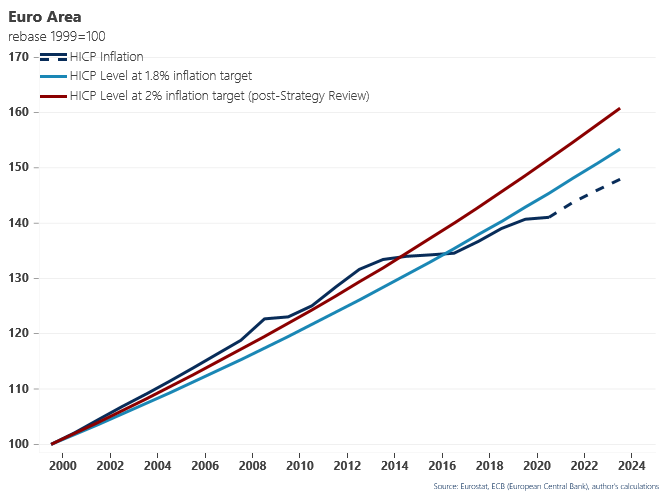 Markets are unlikely to anticipate any marked change in ECB policy making as a result of this Strategy review in large part because there are no major surprises but also because there are offsetting elements in the measures announced. While the shift to a symmetric 2% inflation target may suggest a likely need for longer policy accommodation, the prospect of a somewhat higher ‘neutral’ rate and possible changes in the way inflation is measured hint that later rate increases could be slightly larger.

Today’s ECB review notes that  ‘the Governing Council recognises that the inclusion of the costs related to owner-occupied housing in the HICP would better represent the inflation rate that is relevant for households.’ The Harmonised inflation measure produced by Eurostat already includes a significant element of housing costs but,  while this captures rents and other ongoing outlays such as  maintenance or heat and lighting, it doesn’t capture the costs of home purchase directly or indirectly in the manner captured by ‘owner Equivalent rent’ in US inflation measures. 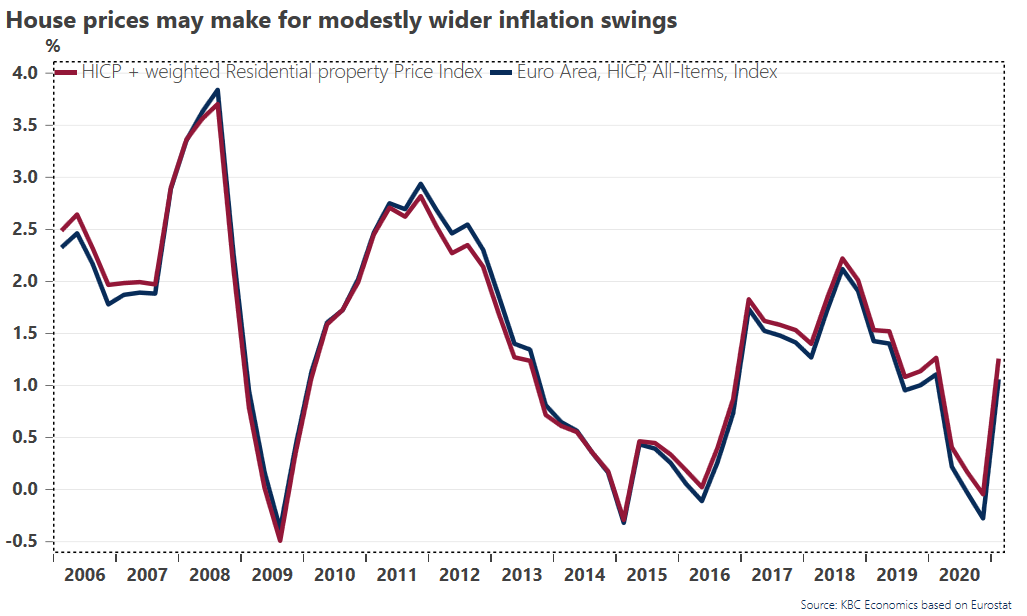 In practice, as movements in house prices tend to strongly reflect economic cycles, inflation would tend to be higher at cyclical peaks and lower at troughs. In turn, that would imply ECB policy rates would move within a wider range through future economic cycles. While this would imply a greater inclination to ‘lean against the wind’, the asset element in house pricing may imply an increased  possibility of asymmetric policy effects across the broader economy and potential complications in relation to the relation with macroprudential policy settings.