No major change in economic view in new projections but…

Market expectations ran quite high ahead of today’s ECB governing council meeting and on several occasions in the past such expectations have been sorely disappointed. While the exchange rate of the Euro did rise somewhat in the aftermath of ECB pronouncements, market interest rates softened marginally, suggesting ECB president Mario Draghi provided some measure of comfort to investors that Euro area interest rates are likely to remain lower for even longer than had previously been envisaged and also raising the (still limited) possibility of a further policy easing.

The slightly divergent responses of FX and interest rate traders could be interpreted as suggesting that while the ECB didn’t announce as much as some might have hoped, it did a little more than some may have feared.

At a technical level, the ECB provided details of the previously signalled new round of funding operations for the banking sector, the third instalment of Targeted Long Term Refinancing Operations (TLTRO’s) that will begin in September 2019. However, this was not the most significant element of today’s pronouncements by the ECB.

The most notable aspect was the acknowledgement of increased downside risks to the economic outlook and the impact this has had on ECB thinking. The most immediate impact was the decision today to delay any increase in interest rates by six months-until the second half of 2020 at the earliest from the previously indicated end of 2019.

At least as important was the increased signalling that the ECB was prepared to ease policy again if needed, a willingness underlined by the inclusion of the phrase’ Looking ahead, the Governing Council is determined to act in case of adverse contingencies..’ in Mr Draghi’s opening press statement. To emphasise the ECB’s capacity in this regard Mr Draghi indicated that there had been a detailed discussion at today’s governing council meeting regarding potential easing measures that the ECB might consider if needed in the future.

While risks are up, the current reality is not all that different but the ECB is alert to dangers

While the past few weeks have seen financial markets move into panic mode on fears of  a notably poorer economic outlook, it should be emphasised that the increased risks acknowledged by the ECB today have not in its view translated into a notably darker economic reality at least for now. Indeed, on a number of occasions, Mr Draghi referred to ‘the disconnect between what markets see and what people expect’. Compared to the previous estimates made three months ago, today’s new ECB projections envisage fractionally stronger economic growth and inflation in 2019 and, as the diagram below illustrates only marginally  weaker trajectories for 2020 and 2021. 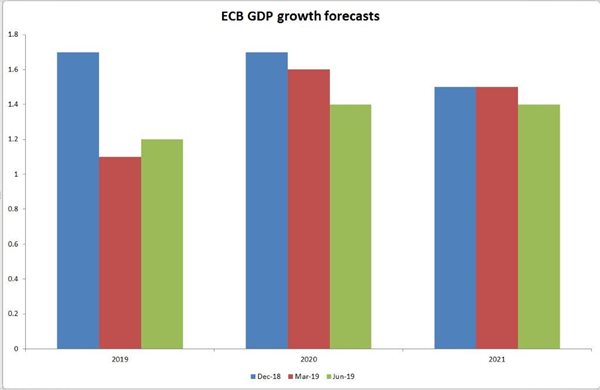 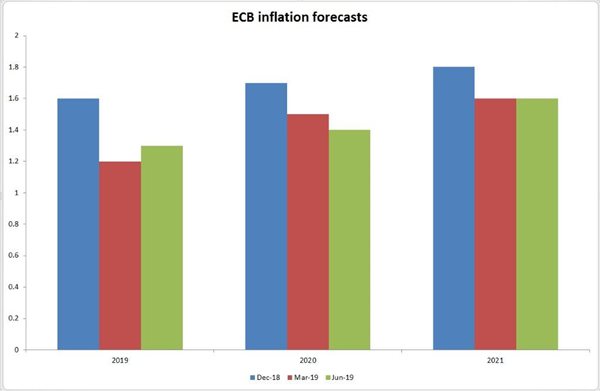 Circumstances in which the ECB sees the current outlook as still moderately positive but significantly threatened might suggest the ECB should keep its powder dry but to seek to impress upon markets that it had ample ammunition and was willing and able to use it. This is likely the driving force behind Mr Draghi’s indication that there was ‘a readiness to act in case of adverse contingencies’ and that this had led to a ‘discussion of granularity’ on the measures the ECB might use to ease policy further.

To emphasise the ECB’s scope to act was substantial, Mr Draghi indicated that ‘policy space is there’. He noted that that several members raised the possibility of further rate cuts, other members referred to restarting the Asset Purchase Programme or further extending forward guidance.  However, he added that such discussions had just started today and the governing council hadn’t discussed which contingency would call for which instrument. This addition is likely designed to emphasise the nature of these discussions is preliminary and tentative to prevent markets from concluding that the process of preparing a future ECB easing action has already begun.

The central message of Mr Draghi today was that the ECB was aware of increased downside risks, that this meant any future rate increases would be further delayed and that should such risks increase further and translate into a notably poorer outlook, the ECB was both able and willing to act to ease policy further. However, some other comments made by Mr Draghi might also suggest that the ECB’s scope to act might be limited in some important respects.

One important constraint on further cuts to the deposit rate and possibly even on the extended maintenance of the deposit rate at current levels is the ongoing concern that prolonged negative interest rates might weaken the profitability of the banking sector and thereby diminish its lending capacity that is central to transmitting ECB policy to the broader economy.

While Mr Draghi argued that thus far ‘in the aggregate’, the ECB wasn’t seeing any adverse effects on lending, a significant insertion in today’s opening press statement noted ‘we will continue to monitor carefully the bank-based transmission channel of monetary policy and the case for mitigating measures.’  This wording might suggest the deposit rate is close, possibly very close, to the effective lower bound at present and the ability to sustain it at current levels cannot be taken for granted.

Arguably of major significance in today’s ECB pronouncements was Mr Draghi’s acknowledgement that ECB policy alone was unlikely to be able to fully offset a serious downturn in economic conditions. Mr Draghi noted ‘Certainly, fiscal policy will have to come into consideration…and play a fundamental role..’. This hints at a possibly fundamental change in ECB thinking. If the ECB were to countenance a more expansionary policy (even though Draghi only referred to it in circumstances of ‘adverse contingencies’ ), it would represent a major regime shift with potentially significant implications for the interest rate outlook in the medium term. It would also accord with some academic thinking for a more nuanced view of the role of fiscal policy such as that proposed in Olivier Blanchard’s address to the American Economic Association at the start of the year.

While Euro area market interest rates softened marginally, the exchange rate of the Euro rose slightly in the wake of Mr Draghi’s pronouncements. These outcomes that can often be no more than a reflection of different market capacities to absorb changes in positions, might also suggest different verdicts on the part of interest rate and FX traders.

To the extent that the date of any possible ECB tightening has been further delayed and the possibility of a further easing increased but in both instances in a direction the market had expected, the reaction of interest rate markets is not surprising. However, for FX traders, the expectation that the US Federal reserve can ease much more aggressively, that the details of Mr Draghi’s pronouncements may be hints at limits to what the ECB can do and perhaps even the prospect of a more supportive fiscal stance within the Euro area would all rationalise a slightly stronger Euro exchange rate.

In light of Mr Draghi’s pointers in regard to possible future policy actions, the ECB’s announcement of the details of the upcoming TLRTO got relatively little attention. Mr Draghi indicated that they were an important backstop and in circumstances where there are concerns about the impact of negative rates on the banking sector, the terms of the new TLTRO’s might seem to reflect an attempt to strike a balance between conflicting views on the governing council. On one hand, the base pricing at 10 basis points over the main ECB refinancing rate represents a penalty, albeit modest, for such funding. However, as was the case with the previous TLTRO, in an effort to stimulate credit creation, the rate charged by the ECB to banks that increase their lending can be reduced by as much as 40 basis points. While the TLTRO, will support Euro area lending capacity, it is unlikely to make any dramatic change to the current outlook for the broader Euro area economy or consequently for the future path of monetary policy.