ECB on hold and hoping to stay there

But guidance lacking on what 'favourable conditions' might mean in practice

There was no expectation that today’s ECB council meeting would deliver any immediate policy change or even signal the possibility of any change in the near term future. The decisions taken in December to extend the Pandemic Emergency Purchase Programme (PEPP) to March 2021 and extend the favourable conditions applicable to the Targeted Long Term Refinancing Operations (TLRTO’s) to June 2021 were intended to put the ECB on the policy sidelines for the foreseeable future. Moreover, differences in thinking within the Governing Council as to how much should have been done in December suggest the barrier to a further move could be set very high at present.

In these circumstances, it is scarcely surprising that the main message from ECB President, Christine Lagarde, at today’s press conference was ‘to reconfirm our very accommodative monetary policy stance.‘ There is little question that the ECB has adopted a very accommodative policy stance and that a substantial easing was warranted. The difficulty is that the unprecedented economic circumstances unleashed by the pandemic mean that it is virtually impossible to know if the scale of actions taken thus far are appropriate, excessive or inadequate.

Still elevated uncertainty led Mme Lagarde to rattle off a list of emerging positives including vaccinations, the resilience of the Euro area manufacturing sector, progress in relation to EU fiscal support, the agreement of a Brexit deal and the prospect of improved policy relations with the new US administration. However, she quickly countered this with a range of threats posed by the latest surge in the virus, signs of weakness in various parts of the services sector and the fact that inflation remains particularly weak, concluding that risks to the outlook for activity were still tilted to the downside.

Asked whether Europe should consider following the new US administration’s lead and increase the fiscal stimulus, Mme Lagarde reasonably countered that national and European measures already taken were substantial and there should now be a focus on rolling-out those measures. However, she also repeated the press statement mantra that ‘At the same time, fiscal measures taken in response to the pandemic emergency should, as much as possible, remain targeted and temporary in nature.’ While such characteristics are entirely appropriate, the emphasis on them today hints there may be significant concerns among ECB hawks that fiscal dominance could constrain ECB policy in the future. In that regard, it points to at least the possibility of somewhat different fiscal paths being taken on either side of the Atlantic in coming years.

How favourable are financing conditions?

If the main purpose of Mme Lagarde’s press conference was to ‘reconfirm’ the current policy stance, she was notably less successful in her efforts to describe the precise nature of the ‘favourable financial conditions’  that stance is intended to deliver in order to boost activity and inflation. This question is not unimportant as markets may test interest rate and FX settings for guidance as to what might make the ECB consider adjusting its current policy settings.

Repeated questions at today’s press conference attempted to probe for some clear metric that might be used to ascertain the circumstances in which markets might begin to look for either a further ramping up or scaling back of ECB support measures. Of course, no simple metric of this sort exists and if it did have some such indicator, the ECB would be unlikely to highlight it to the market as it would become a mechanical focal point for policy expectations.

Mme Lagarde repeatedly emphasised the ECB was taking a ‘holistic and multi-faceted approach’ that would look at financing costs for all sectors-firms and households as well as Governments in order to assess whether financial conditions were favourable or not. Critically, while favourable financial conditions were the compass being used to assess the stance of monetary policy, the anchor is the outlook for inflation.

In this context, it might be argued that the current ECB expectation of ‘a protracted weakness in inflation’ could suggest that, although borrowing costs are historically low, financing conditions may not be sufficiently accommodative for the Euro area economy’s current needs.  The diagram below that compares how credit standards for Euro area firms and households have evolved compared to the ECB’s projection for core inflation. The diagram hints that altogether loser credit conditions may be required to produce a sharp rise in projected ‘core’ inflation that would still leave it well below the ECB’s target range in 2023. 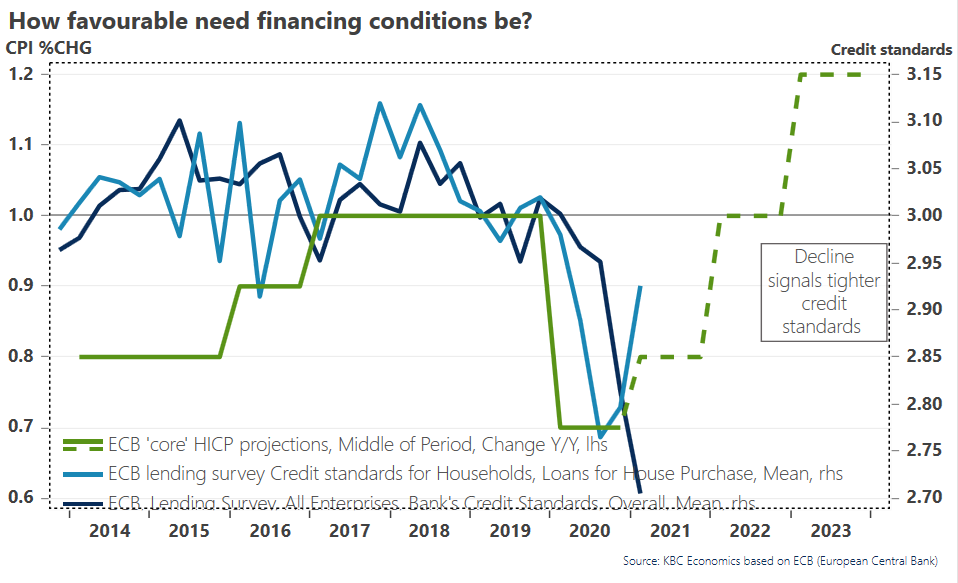 Although there is little likelihood of any near term change in ECB policy-making, forward looking financial markets are always looking to establish the likely timing and direction of travel for policy in the future. The announcement in December of a flexible approach to PEPP purchases has caused markets to at least begin to consider the circumstances in which previously ‘reliable’ ECB purchase amounts might be adjusted through the course of the coming year. It is entirely understandable that the ECB would want to avoid making itself a prisoner to either one or more particular measures of either yield levels or spreads. The relatively limited market reaction to recent political turbulence in Italy suggests the current message is broadly understood -at least for now.

Mme Lagarde, also repeatedly emphasised the two-sided nature of the recently revised wording on PEPP purchases. However, there is little question that markets are beginning to focus on what might cause the ECB to do less than previously envisaged rather than what might lead the ECB to do more.

The difficulty is that markets understanding of the ECB’s reaction function could be unsettled either by volatility in foreign yields or by either a flare-up or unexpected fall in inflation. Our sense is that there is some flux in ECB thinking, with an increasing resistance to further accommodative measures and some emerging concerns about the future course of fiscal policy. In the same context, Mme Lagarde’s indication that the ECB was watching the exchange rate of the Euro ‘carefully’  had a hollow ring.

While there is still a dovish majority on the ECB Governing Council, markets may well explore some modest upside in rates and or the single currency in coming months that could call for increased clarity as to what exactly is meant by ‘favourable financial conditions’.