The possibility of a further ECB rate cut has faded

• Economic outlook still weak with risks to the downside.

• So, talk of a rate cut could return.

• Mr Draghi evasive on when ECB might use OMTs to support Ireland.

It seems that Mr Draghi and his colleagues on the ECB Governing Council had a very good Christmas. The euro area economic ‘glass’ which they viewed as half empty in early December is now regarded as half full. So, the possibility of a further ECB rate cut that Mr Draghi raised at his press conference a month ago has now faded. The ECB still sees economic risks to the downside and the fragility of economic conditions in the single currency area means a final ECB rate cut shouldn’t be ruled out completely. However, Mr Draghi and his colleagues now appear to take a very different view of prospects than they did a month ago—a change in perspective that seems quite dramatic relative to changes in the economic and financial news-flow in the interim.

The ECB Changes Its Mind

A sense that it is the ECB’s perspective rather than the economic and financial situation that has changed is suggested by the very limited changes in the ECB’s opening press statement from a month ago. The press statement tends to give a relatively’ straight’ assessment of circumstances whereas Mr Draghi’s comments tend to provide a more nuanced view of thinking around the Governing Council table. According to the press statement, economic weakness is expected to persist in early 2013 but as was said in December, activity should gradually recover later this year’. As in December, there were tentative signs that a number of indicators began to stabilise, albeit ‘at low levels’. This month’s press statement also repeats the observation that ‘financial market confidence has improved’ but follows this with the word ‘significantly’ rather than ‘further’.

A month ago not markedly different circumstances prompted a split on the ECB Governing Council with some market sources suggesting a majority favoured a rate cut at that meeting. Today, Mr Draghi said the decision not to cut interest rates was ‘unanimous’, a remarkable change in thinking. He went on to cite list of financial market indicators, none of which appears to have changed notably in terms of trend since the December policy meeting. For example, Mr Draghi referred several times at today’s press conference to the drop in Government bond spreads in euro area periphery economies. As diagram 1 below indicates, there has been some easing in spreads in the first week of 2013 but there is nothing exceptional about this in the context of the scale and direction of movements seen in the second half of last year. Indeed, there is quite a similarity between the trend in spreads in late December/early January with that seen in late November/early December. 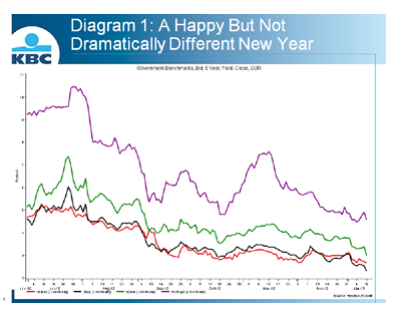 With markets clearly of the view that global ‘tail risks’ have been removed both by the ECB’s announcement of OMTs last Autumn and the more recent Budget compromise in the US, it would have been very surprising and disappointing if the start of a new year and quarter did not see money going to work in this fashion. For these reasons, Mr Draghi’s notably more positive assessment today can’t be regarded as the inevitable and completely obvious response to a marked change in financial conditions in the past month.

Significantly, the ECB continues to acknowledge that any improvement in financial conditions has yet to feed through to the ‘real’ economy. The January press statement notes ‘there has been little change in credit growth, which remained weak in November’. However, the ECB now suggests some element of this weakness is to be expected by stating that ‘subdued loan dynamics reflect the current stage of the business cycle’ (because credit growth usually lags rather than leads the economic cycle) as well as continuing to recognise more problematic issues such as ‘heightened credit risk and the ongoing adjustment in the balance sheets of households and enterprises’. However, this month’s press statement does not repeat last month’s reference to ‘capital constraints, risk perception and the segmentation of financial markets’ that were judged to be restricting credit supply in a number of countries. So, concerns about constraints on access to credit appear to have eased.

References to the ‘real economy’ in today’s opening press statement are not significantly different to those of a month ago. As noted above, economic weakness is expected into the early part of the year with risks remaining to the downside. Indeed, it might be argued that today’s judgement that ‘later in 2013, a gradual recovery should start’ is slightly more cautious than December’s observation that ‘later in 2013 activity should gradually recover’. In justifying the expected improvement, the ECB now mentions the contribution of its accommodative monetary policy ahead of a strengthening of global demand. This subtle change could reflect two considerations. First of all, it may suggest a sense that the ECB feels its policy actions are already doing quite a lot—possibly all that it can in the view of some Governing Council members. Second, there may be some concern that fiscal tightening in the US may translate into a somewhat less supportive external backdrop for the euro area economy.

Our judgement is that the outlook for Eurozone growth still remains quite uncertain. A recurrent feature of recent years has been a sequence of mini-cycles in activity where growth appears to be on a notably healthier or weaker trajectory than eventually materialises. If the current situation is not quite as threatening as it appeared to be to ECB Governing Council members in early December, the weakness in GDP and the very tentative nature of the recent improvement in sentiment depicted in diagram 2 means that the door to a further rate cut hasn’t been completely closed by Mr Draghi’s comments today. However, it is clear that it will take significant evidence of renewed economic weakness to prompt such action. Mr Draghi also hinted that the effectiveness of a further cut is being questioned when he said in response to a question that in spite of higher unemployment and a large output gap, inflation is not as low as might have been envisaged. This suggests that the ECB sees a good deal of the Euro area’s current difficulties as structural rather than cyclical and consequently less amenable to easier policy. 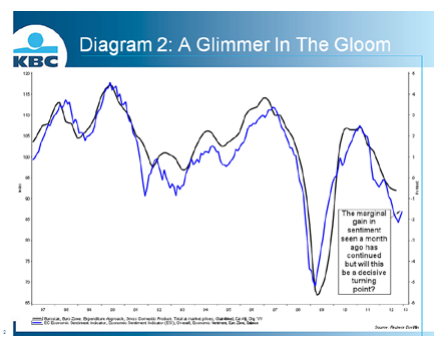 By and large, today’s ECB press conference was uneventful even if Mr Draghi appeared to be rather irritated by repeated questions from journalists attempting to understand an apparently large change in the ECB’s assessment of the current situation as well as the much reduced prospect of a further cut in ECB rates. Mr Draghi did try to make it clear that this change shouldn’t be seen as signalling any step towards an exit strategy. He said a turning point would require far more than evidence of an improvement in financial conditions that was still some distance from a complete ‘normalisation’ and emphasised the ECB was not seeing any early signs of a strong economic recovery.

That said, Mr Draghi emphasised a range of improvements in financial conditions and highlighted areas such as a reduced dependence by periphery economies on ECB funding and an associated reduction in target 2 imbalances, which have been a significant source of (misplaced) concern by some commentators. Mr Draghi also highlighted differences between current conditions and those of a year ago when he said the implementation of LTROs in early 2012 had prevented the ‘potential for severe distress’. An important and practical indication of how much circumstances have changed in the interim could become evident in late January and February when banks have the option of an early repayment of these three year funds.

Mr Draghi also gave a somewhat cranky answer to a question on when exactly Ireland might become eligible for activation of Outright Monetary Transactions (OMTs). He said he had previously set out these conditions very clearly. If this is the case, that occasion was missed by this writer who only remembers some fairly vague references to OMTs becoming operational when a return to market funding was at hand. Given recent NTMA funding activity, much of the groundwork in this regard appears to have been done by Ireland. While the impact of ECB action would be maximised if it occurred closer to the implementation of a regular funding calendar, Mr Draghi might have been more helpful in the tone of his remarks on this topic today. Hopefully, this doesn’t say anything about the current status of talks between the Irish Government and its EU partners on more contentious issues such as finding a suitable mechanism to reduce the immediate burden of the Promissory notes on the Irish Public Finances.