• Does ECB ‘goodwill’ towards Ireland suggest problem of promissory notes can be overcome?


There was little expectation that the European Central Bank would cut interest rates at today’s policy meeting. So, there was no surprise when the announcement came that they were left unchanged. However, this decision may have been a little bit closer than generally thought. New ECB projections show a notably poorer outlook for activity and a lower inflation rate than previously envisaged. In addition, Mr Draghi acknowledged that a rate cut had been discussed as had the more contentious issue of a negative deposit rate.

The general tone of Mr Draghi’s comments today suggest the ECB is more open to the possibility of a further cut in its key policy rates than many in the market had anticipated. However, as we noted in previous assessments, clearer signs of a further weakening in Euro area conditions, entailing a softer trajectory for ‘core’ economies, may be needed to forge a consensus for a further easing.

Today’s new ECB staff projections show a notable reduction in the outlook for growth through 2013. The midpoint of the new staff projection envisages a fall in GDP of 0.3% next year, a significantly weaker outcome than +0.5% increase in GDP seen in the ECB’s September projection. This represents a relatively large amendment to what was already expected to be as a sluggish Eurozone economy in the year ahead. Arguably of greater significance, the ECB’s new forecast is notably lower than recent forecasts by the EU Commission (+0.1%) or OECD (-0.1%).

Today the ECB also published its first estimate for Eurozone growth in 2014. This envisages some recovery in GDP growth (the midpoint of the projection is +1.2%). However, the details of today’s projections suggest an extended period of subpar economic activity—and today’s ECB statement also acknowledged that risks to the outlook remain to the downside. Consumer spending is now expected to decline by 0.6% in 2013 (compared to a flat outturn expected in September) and is only seen recovering by 0.5% in 2014. So, consumer spending across the Eurozone will remain fairly depressed for the next couple of years.

In these circumstances, the outlook for employment and unemployment (the ECB does not publish projections for these variables) must be something of a concern at the policy making level across Europe. As diagram 1 shows, the Euro area unemployment rate has been on a very sharp upward trajectory for the past eighteen months. With budget austerity limiting the scope for responses from other macro policies, there is some risk that the ECB may be required to take further action to support a deteriorating Eurozone economy in the first quarter of the next year. 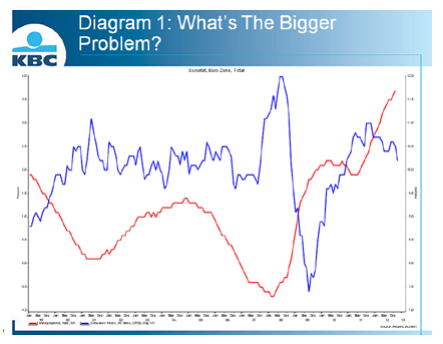 Inflation Also Expected To Be Subdued

Today’s new ECB projections also suggest significantly less concern about the inflation outlook in Wilhelm-Epstein-Straße of late. In part, this reflects the significant easing in the flash estimate of November inflation reported last week. As diagram 1 above indicates, this has returned the current inflation rate to its lowest level in two years and very close to the ECB’s target range. Together with the weaker outlook for activity, this has prompted a downgrading of the ECB’s inflation projection for 2013 from 1.9% to 1.6% and a further easing in inflation to 1.4% is seen in 2014. It should be noted that Mr Draghi emphasised that the inflation outlook remains in line with the ECB’s target and that the Governing Council’s views had not changed substantially. However, new projections and the general tone of Mr Draghi’s comments on the economic outlook today suggest inflation is unlikely to present any significant obstacle to an easing in ECB policy if this is deemed necessary in early 2013.

Mr Draghi seemed to further confirm a gradually changing mindset within the ECB when he indicated that a rate cut had again been discussed at today’s policy meeting but ‘the prevailing consensus was to leave rates unchanged’. This wording suggests some ECB policymakers might have sought a rate cut today. It can be dangerous to overanalyse the significance of any particular phrase but Mr Draghi’s choice of word ‘prevailing’ in this context might be interpreted as signalling either that there are a range of opinions on the Govern Council or that what is currently the consensus view may be likely to change in the months ahead.

Another slightly surprising comment by Mr Draghi today that suggests that a further policy easing is under consideration was his admission that the Governing Council had discussed the possibility of a negative interest rate (the ‘floor’ set by the ECB’s deposit rate is currently zero). He also noted that the ECB was ‘operationally ready’ to handle negative rates although he added that ‘the discussion didn’t go into any depth on this point’. Concerns that very low or negative policy interest rates would have an uncertain and possibly damaging impact on some financial institutions have made Central Banks reluctant to countenance action of this sort. However, Mr Draghi’s public acknowledgement that this sort of discussion has been taking place suggests the ECB is at least considering the possibility that further policy easing might be required.

While the ECB may be considering what policy changes might be required in the future, it is not clear what impact a further interest rate cut—from already very low levels—might have. Mr Draghi admitted today that funds accessed through the ECB’s long term refinancing operations had helped the financial sector but had not significantly assisted the real economy. At the margin, another rate cut would assist banks drawing funding from the ECB’s refinancing operations and might also soften the Euro on FX markets, but it would not deliver ‘shock and awe’. This might mean that the ECB is some distance from agreeing how to act if an aggressive easing was required in response to dramatic deterioration in economic conditions.

Mr Draghi was also asked today about his reaction to yesterday’s Irish Budget and what implication this might have for the vexed issue of the funding of IBRC, the wind down vehicle for the former Anglo Irish Bank and Irish Nationwide Building Society. Mr Draghi acknowledged the commitment shown in what was a sixth successive austerity budget. However, he wouldn’t be drawn on how an alternative to the funding current mechanism of promissory notes might be tackled. This is a particularly sore subject in Ireland at present because interest payments on these promissory notes will add €1.9 bio or 1% of GDP to the projected General Government deficit in 2013. After a particularly difficult Budget, the Irish Government needs a constructive solution to be found relatively quickly.

Mr Draghi said that the ECB could not enter into any agreement that would entail monetary financing of Governments but added that there was plenty of goodwill towards Ireland. It would be both disappointing and surprising if Mr Draghi’s reference to ‘goodwill’ was merely a platitude. An alternative interpretation would be that the principle of providing additional assistance to Ireland as signalled in the end June EU summit statement remains in place but practical problems remain in finding solutions that are entirely consistent with the ECB’s mandate. The Euro area needs Ireland to exit successfully from its EU/IMF assistance programme nearly as much as Ireland does. This commonality should allow a solution to be reached before a very awkward repayment of €3.1 bio falls due at the end of March 2013.