…But inflation to remain subdued

Clear message that easy policy to continue but can it last throughout 2018?

There was little or no excitement expected by markets from today’s ECB governing council meeting and the ECB lived down to these expectations. ECB president Mario Draghi’s press conference and new ECB economic projections both spelled out the same two related messages. The ECB is pleasantly surprised by the strength of the recovery in activity in the Euro area and it is determined to avoid any unpleasant surprises in financial markets that might threaten that recovery any time soon.

As a result, the strong signal from the ECB today was that any adjustment in its monetary policy is still a long way away even if Mr Draghi seemed to create a very small element of wriggle room in this regard.  Indeed, on several occasions during the press conference Mr Draghi sought to underline policy continuity by indicating that there had been no discussion of future policy options. A slight easing in the exchange rate of the Euro and unchanged market interest rates in the immediate aftermath of the ECB’s pronouncements suggested that the message of no change now or any time soon was received and understood by markets.

While acknowledging the current momentum in the Euro area economy, Mr Draghi avoided any worrisome implications for ECB policy by emphasising the lack of any notable follow through from stronger growth to higher inflation. The new ECB projections which show growth remaining well above potential but inflation remaining below target out to 2020 provide further re-assurance of a decoupling of growth and inflation that could allow ‘An ample degree of monetary stimulus ’ remain in place for some considerable time.

As diagram 1 illustrates, the new ECB staff projections envisage the four year period between 2017 and 2020 delivering the strongest sustained period of growth in activity and employment since the mid 2000’s. However, unlike that period which saw inflation persistently above 2%, the new ECB projections see only a modest pick-up in consumer prices that means inflation remains below the ECB’s target rate out to 2020 (when questioned today, Mr Draghi carefully avoided repeating last December’s assertion that an inflation outturn of 1.7% is ‘not really’ in line with the ECB’s target).

Indeed, as diagram 1 suggests, ECB projections imply that, although increases in GDP are set to remain well above the Euro area’s potential growth rate and the output gap is now moving into positive territory, current policy settings can deliver a notable break from history by helping growth and inflation to remain on smooth glide paths towards desired outcomes.

It may be that global economic slack and reforms in some parts of the Euro area will mean that, as in the US, inflation falls substantially short of the trend in activity but this would mark a dramatic change in the performance of the Euro area economy. 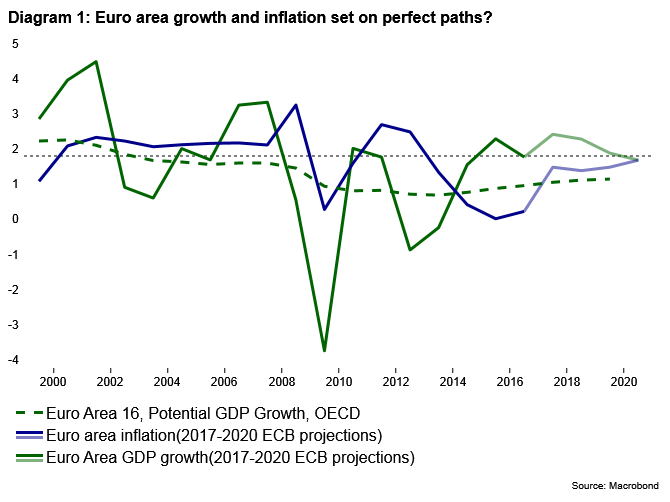 We would note one small pointer that hints albeit slightly towards an inflation trend that might warrant a somewhat less accommodative future monetary policy stance. The initial headline inflation forecast of 1.7% for 2020 is restrained marginally by oil prices and underlying inflation at 1.8% is probably broadly in line with the stated ECB target of a rate ‘below, but close to, 2%’.

We would also highlight that Mr Draghi was careful to avoid suggesting that reaching any particular inflation rate would trigger consideration of policy tightening. Instead, he repeatedly said that what matters in terms of policy is evidence of a pick-up in inflation that is ‘sustainable and self- sustaining’. He also said that it remains ‘quite early’ both in terms of the measures the ECB announced in October and, more generally, in terms of current activity and inflation developments to even begin to contemplate future policy measures.

While we think that a clear pick-up in inflation accompanied by signs of faster increases in wages may prompt notably different messaging from the ECB, that is not an issue for today. A more relevant near term policy signal is the continuing reference today to ‘domestic price pressures (that) remain muted overall and have yet to show convincing signs of a sustained upward trend. An ample degree of monetary stimulus therefore remains necessary for underlying inflation pressures to continue to build up and support headline inflation developments over the medium term.’

Mr Draghi did note that the Governing council is now more confident than it was six weeks ago that in time improving economic conditions will translate into higher inflation. But again he sought to distance the point between stronger growth and any inflation outcome that might require tighter policy. For now, he suggested healthier growth meant that the risk of deflation had disappeared and the possibility of very low inflation had become much more remote.

The clear message is that growth and inflation have some way to go before they trigger any significant policy discussion. To further emphasise this point, he noted that a strong majority on the Governing council favour keeping the Asset Purchase Programme open-ended rather than pre-announcing a specific end date.

Our sense is that while there is a strong consensus around the ECB’s governing council table on the outlook for Euro area activity, views on the likely consequences for inflation may be more diverse and judgements as to the implications for policy may be becoming more fractured.  There is little doubt that dovish thinking remains dominant at least for now. However, the persistence of above trend growth and even tentative signs of emerging price pressures could tilt the balance notably as 2018 progresses.

For now, the ECB’s current message and the near term policy outlook are crystal clear. The key question is whether markets are pricing in at least the possibility of a more forceful change in ECB policy even if that possibility remains a year or more away.