• ..but risks still to downside. So, door not completely closed to further easing.

As anticipated, the European Central Bank left its key official interest rates unchanged at today’s policy meeting of its Governing Council. Following a cut in official rates to historic lows in May and last month’s unexpected decision to introduce ‘forward guidance’ in relation to policy, little radical was envisaged today and both the outcome of the meeting and the subsequent press conference lived down to very limited expectations.

At the margin, ECB President Mario Draghi sounded a little more confident that a gradual turnaround in the Eurozone economy has begun. So, it would take significant signs of renewed weakness in activity to prompt a further easing. However, the ECB still sees risk weighted to the downside, meaning another rate cut can’t be completely ruled out. The more important if not entirely new message from today is that any tightening in policy remains some very considerable distance away. Indeed, Mr Draghi noted that current market expectations that see market interest rates moving only marginally higher through 2014 ‘are unwarranted’. So, the ECB wants to make it very clear that its policy will remain very accommodative for a very, very long time.

There was no substantive change in the ECB’s assessment of current economic conditions but there were signs that the Governing Council is encouraged by recent data that ‘tentatively confirm the expectations of a stabilisation in economic activity at low levels’. To the extent that a threatening downward trend in activity through late 2012 and early 2013 has given way to signs of a ’bottoming out’ in activity, the need for further policy easing has been reduced. Because the ECB recognises that this stabilisation is occurring at extremely ‘low levels’ and that downside risks continue to dominate, the door has not completely shut on further easing. The ECB may also be keen to keep the possibility of a further easing on the table as a device to emphasise substantial differences in the cyclical position of the Euro area and US economies where the Federal Reserve is about to scale back the monetary stimulus it is providing.

A sense that it would take a significant further deterioration in Eurozone economic conditions to prompt a further easing was further suggested by Mr Draghi’s acknowledgement that a rate cut was not discussed at today’s meeting. Instead, he emphasised that the Governing Council unanimously confirmed the forward guidance it had given a month ago.

How Long Will Rates Stay Low?

If it may take notably poorer circumstances to prompt a further easing, the main focus of Mr Draghi’s press conference today was to underline that it will take a marked improvement in economic circumstances—a development likely to take ‘an extended period’—to bring the ECB to the point where any tightening of policy might be contemplated. A rather unproductive discussion as to what exactly an ‘extended period’ might mean took up a significant part of the press conference.

Mr Draghi was repeatedly asked whether the ECB might follow the example of the US Federal Reserve and provide greater guidance on thresholds or trigger points in the form of particular values for economic variables indicators that might prompt a policy change. Mr Draghi instead rather vaguely related the ECB’s forward guidance to its policy framework and refused to be drawn further. Instead, he said that markets had ‘all the parameters in your hands’ to allow a judgement as to when the language of forward guidance might be changed. He highlighted that the ECB had no precise deadline in mind and added that many market commentators had used their own assessments of economic developments and the ECB’s reaction function to derive estimates of what an extended period might mean in terms of calendar months.

Our judgement is that the exceptional nature of current economic circumstances makes it highly speculative to attempt to judge when ECB interest rates might begin to rise. However, as inflation and activity are likely to remain fairly constrained for at least another 18-24 months, it would not seem entirely unreasonable to argue the first half of 2015 might be regarded as the current horizon of the ECB’s ‘extended period’. 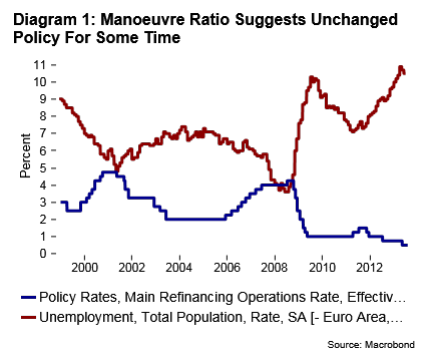 Forward Guidance Not Yet Fully Thought Out

Our sense last month was that the decision to introduce ‘forward guidance’ reflected a range of influences but a key element was desire to implement a form of verbal easing that would differentiate the current ECB stance from that of the US Federal Reserve. We also think that reflecting both the exceptional nature of current circumstances and the more ‘creative’ approach of the ECB under Mr Draghi, the entire range of implications of this course of action may not have been completely thought through. In this context, we think today’s comment that the ECB has not yet decided whether to repeat its forward guidance at every meeting reflects the ‘work in progress’ nature of its latest initiative. It is understandable that repeating the forward guidance commitment each month would hint at a monthly re-assessment of guidance that might suggest guidance only lasts for a month (an interpretation suggested by Mr Weidman in July that Mr Draghi didn’t convincingly deny today). However, the reality is that in the absence of regularly repeated reassurance, markets may tend towards periodic convulsions in response to tonal changes in ECB speeches. Unfortunately, as current uncertainty in the US suggests, even the introduction of fairly specific guidance in terms of threshold or trigger points won’t entirely remove policy related uncertainty in markets.

The same sense of ‘work in progress’ is hinted at by slight differences in comments by Mr Draghi today and those made by Benoit Coeure, the ECB executive director, in an interview earlier this week (Le Figaro, 29 July). Mr Draghi said today that ‘liquidity would remain abundant at least until July 2014’. He added that there was no connection between that date and the ECB’s commitment to maintain accommodative policy for ‘an extended period’. However, Mr Coeure said earlier this week that,

“Forward guidance discloses more information on our view of the economy and the conclusions we draw…and it not only concerns interest rates—it also concerns our liquidity policy. We have been clear that banks can have as much liquidity as they want for an extended period of time.”

This is a slightly different version of events to that outlined by Mr Draghi today and hints that many of the details in regard to forward guidance have yet to be worked out. Indeed, with market rates edging higher, the liquidity aspects of forward guidance could assume notably greater importance in the months ahead.

Markets May Remain Relaxed For Some Time

A year ago Mr Draghi committed to do ‘whatever it takes’ and then introduced the possibility of Outright Monetary Transactions, seemingly without first agreeing all the details with his colleagues in the ECB. Importantly, his promises have not been tested by the markets in the interim. While there may be significant questions about how precisely forward guidance may operate in practice, current circumstances are altogether less extreme than twelve months ago and Mr Draghi’s credibility has been significantly enhanced. As a result, the ECB may be able to enjoy a somewhat calmer summer break than it has for many years and concerns about what precisely forward guidance might mean may not become too troubling for quite a while.