ECB eases a little more than expected and may need to do more?

More action may be needed in the Autumn

The ECB took forceful and focussed action today by easing policy a little more than was generally expected and by concentrating that easing through an increase in the size and duration of the Pandemic Emergency Purchase Programme (PEPP) that it introduced in mid-March.

The ECB also underlined the need for that action by marking down its outlook for activity and inflation in the Euro area in its new economic projections. These developments signal that a very accommodative monetary stance is envisaged for the foreseeable future and hint at a likely further easing, most likely through a further step-up in bond-buying in the Autumn.

In turn, this stance should reassure financial markets of large and lasting monetary policy support. This should also limit the immediate cost of government borrowing, thereby permitting additional fiscal policy action to facilitate an economic turnaround.

Actions centred on PEPP for many reasons

Markets felt there could be some alteration in the size of the PEPP today because the ECB has already used nearly €200 million of the existing €750 million scope of the programme. However, there had been some suggestion that the ECB might not make any adjustment until July or September and most analysts felt that any increase might be between €300 and €500 million.

The ECB announced today that the PEPP would now total a cumulative €1300 million, an increase of €600 million from the previous ceiling and also indicated that this programme would be maintained longer than the previously signalled end date of December 2020 to ‘…at least the end of June 2021’ and ‘until the Governing Council judges that the coronavirus crisis phase is over.’ The ECB also stated that it will re-invest any maturing purchases under this programme until the end of 2022.

By doing a little more than expected and signalling the PEPP will last longer than previously envisaged, the ECB is acting (slightly) more forcefully than has sometimes been the case in the past. The fragile nature of financial market and broader economic sentiment at present coupled with the adverse reaction to the poorly designed and delivered package of measures that the ECB president, Christine Lagarde, announced on March 12th has clearly had an impact on ECB thinking.

Unless conditions improve notably faster and further than currently envisaged, the likelihood is that the ECB may need to do more through the Autumn to sustain favourable financial conditions and bolster economic recovery. If PEPP purchases continue at the current pace, the programme could reach its new limit early in 2021.

While the ECB has bought significant time with today’s actions, a crucial consideration in the current climate is the markets’ need for confidence in the capacity of the ECB to offer longer and larger support if required.

Today’s ECB actions were focussed exclusively on the PEPP. One reason for this is the specific if severe nature of the downturn points towards a need for concentrated action to deliver, as ECB president Christine Lagarde repeatedly emphasised today, both in terms of easing the monetary stance and ‘..to effectively stave off risks to the smooth transmission of monetary policy.’

A further important consideration is that the upscaling of the PEPP pointedly steps around the current German Constitutional Court concerns regarding the broader Public Sector Purchase Programme as well as giving the ECB much greater flexibility in terms of the nature and nationality of the assets it purchases.

The specific nature of the PEPP and the crisis to which it is addressed is also likely to make it less repugnant to some of the more hawkish members of the Governing council than more generic asset purchase programmes.

Today’s ECB opening statement repeats the time-honoured commitment that ‘The Governing Council, therefore, continues to stand ready to adjust all of its instruments, as appropriate’. Our sense is that for practical purposes, two key elements of the ECB’s toolkit overshadow all others at present.

When asked about other policy options today, Mme Lagarde answered that the choice of adjustments to the PEPP was ‘appropriate and adequate’. However, she also highlighted the role of  the ECB’s Targetted Long Term Refinancing Operations (TLTRO’s). Importantly, the full impact of important adjustments to TLTRO’S made in March and April has yet to be seen.

Significantly, the primary ECB policy impetus at present appears to be coming through the PEPP and TLTRO’s. The nature of both of these instruments makes them particularly suitable in circumstances where avoiding fragmentation of markets that would produce divergent financial conditions across sectors or countries is of particular importance. In turn, this may imply that the sort of economic and financial difficulties now being faced means that access to ample and attractive liquidity is deemed more critical than the precise pricing of such funding at present.

If a range of arguments can be advanced for a focussed set of monetary policy supports, today’s ECB projections underline why forceful action is needed. The diagram below taken from the ECB’s new macroeconomic projections highlights the suddenness and severity of the downturn prompted by Covid-19 and the protracted and partial nature of the recovery now envisaged.

As the diagram illustrates, the new projections envisage that Euro area GDP will still not have recovered to its end 2019 level by the end of 2022. Moreover, today’s statement indicates that in the ECB’s judgement the risks to activity are still weighted towards the downside. A shortfall of this nature carries the threat of significant economic and financial ‘scarring’ that could weigh on Euro area activity and employment prospects for some significant time thereafter. 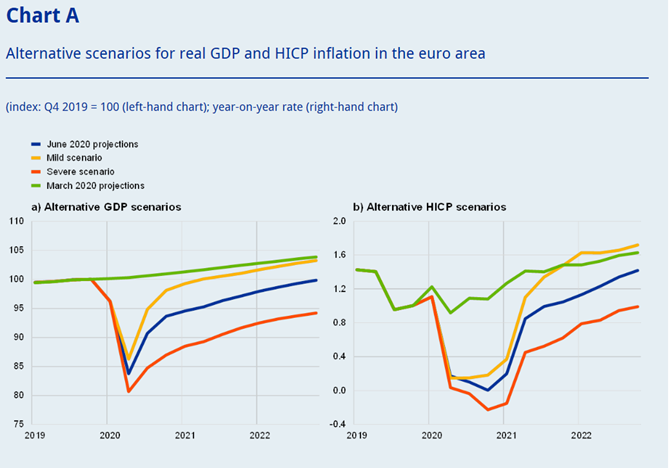 In the same vein, the ECB appears to overcome earlier uncertainty about the more enduring impact of the downturn on inflation prospects. While previous ECB comments had acknowledged a clear short-term downward pressure on inflation, most had also indicated uncertainty as to the likely relative importance of subsequent constraints on demand and supply.

The new ECB projections suggest that because the downturn is expected to be short-lived that weakness inflation will not spill over into deflation. As a result, the scale of decline in inflation that the ECB envisages in the near term is markedly less pronounced than that in economic activity. It is certainly the case that nominal rigidities in wages and in some pricing contracts could represent a ‘zero lower bound’ for inflation. However,  there may be some risk that even stronger disinflationary forces take hold.

In terms of the longer term outlook for ECB policy, it is instructive that the ECB projections see headline inflation only rising to 1.3% in 2022. More tellingly, underlying inflation is only seen at 0.9% in that year compared to a rate of 1.0% in 2019.

The expectation that unit labour costs will only increase by 0.1% in 2022 suggests the possibility that Euro area inflation could remain stubbornly and substantially below the ECB’s goal  to achieve a ‘robust convergence of inflation to levels that are below, but close to, 2% over the medium term.

message to markets and governments; we're here to help

In turn, that will re-assure markets that any adjustments to ECB policy in the next year or two seem far more likely to entail further easing than any early unwinding of current measures.

The clear stance of ECB policy should also limit the cost of additional and 'ambitious' fiscal easing that the ECB indicates as 'critical' to a turnaround in economic conditons. In stark contrast to the financial crisis of a decade ago, the ECB is now opening rather than locking doors to supportive fiscal policy measures.