No major change in thinking but focus on downside risks.

• Any substantive move would take ECB into uncharted waters.

• We think chance of easing around 1 in 3 at present.

As expected, the European Central Bank left its key interest rates unchanged at today’s monthly policy meeting of its Governing Council. While Mario Draghi’s press conference didn’t suggest any marked change in ECB thinking of late, there was a strong desire to emphasise that the ECB remains focussed on downside risks to a still fragile Euro area recovery. A determination to underline that the ECB is able and willing to ease policy further if necessary prompted what Mr Draghi called the use of ‘even firmer language in our forward guidance’ in today’s policy statement.

Our sense is that it would take a marked deterioration in economic and financial conditions to cause the ECB to ease again, in large part because any further action is likely to take ECB policy into uncharted waters. However, the still tentative nature of the recent improvement in what is still a decidedly weak economic environment in the Euro area means that the chances of a further easing are far from negligible. We would currently put them at about one in three.

Mr Draghi suggested that monetary policy would remain on hold ‘for as long as necessary’ if the economic situation developed in line with its baseline scenario in which ‘output is expected to recover at a slow pace’ in 2014 and 2015. However, he indicated today that policy would be eased again in the event of one or other of two ‘contingencies’ which he elaborated as ‘an unwarranted tightening of money market conditions or a deterioration in the outlook for inflation’ (he subsequently clarified that in the current circumstances a deterioration in the inflation outlook meant the prospect of even lower inflation than is currently envisaged).

Through recent weeks the repayment of funds from maturing Long Term Refinancing Operations (LTROs) has seen excess liquidity in Euro area money markets decline and this coincided with some upward pressure on shorter dated interest rates, a development that was hugely aggravated by normal end-year market pressures. These have since abated and rates have eased back. However, there is some risk that a further tightening in liquidity conditions in coming weeks could cause an unhelpful rise in short term market rates and Mr Draghi indicated today that the ECB would act to counter this, although he was decidedly vague as to how and to what extent it would do this.

Mr Draghi’s reluctance to be too specific on how the ECB would respond to a liquidity-related firming in market rates likely owes something to a reluctance to stir up any expectations of an imminent further easing that would put pressure on the Governing Council. More importantly, it ECB Continues To Emphasise Willingness To Ease Further9 January 2014 3 also reflects what is a quite complicated relationship between liquidity conditions and market interest rates. Mr Draghi went to considerable lengths to argue that the link between overnight rates and the volume of excess funds in the market was far from mechanical. He took the unusual step of reciting a list of dates on which excess reserves were similar but overnight rates varied widely.

While Mr Draghi is entirely correct to assert that the relationship between excess liquidity and shorter dated interest rates is not entirely straight-forward, over time tighter liquidity will tend to push these rates higher. This could become an awkward issue for the ECB over the next few months and may require some response although as we note below, the ECB doesn’t appear to have an agreed solution to what is essentially a technical problem.

The second potential cause of a further easing in ECB policy cited by Mr Draghi was any development that suggested a further weakening in the outlook for inflation. Presumably, this would entail either a clear reversal of recent indications of an improvement in economic conditions in the Euro area or signs that inflation was likely to clearly undershoot the ECB’s current forecast of 1.1% for 2014. The latter suggests that price data for the early months of this year will assume a considerable importance.

Mr Draghi correctly referred today to ‘quirks’ in German services inflation data for December that reduced the Euro area inflation rate last month. Similar statistical quirks have been a recurrent feature of inflation figures for the Euro area around the turn of the year and may distort the picture in the next few months but there appears a significant risk that, barring weather related distortions, inflation could run uncomfortably low in the first half of 2014. Only if this results in a corresponding acceleration in household spending will pressure for a further ECB easing not gather momentum, particularly in the wake of Mr Draghi’s emphasis on inflation concerns today.

Another downside risk to the outlook for Euro area activity referred to by one questioner at today’s press conference is the prospect that the upcoming Asset Quality Review (AQR) will weigh further on bank lending and thereby restrain the capacity of the recovery to build momentum. Mr Draghi rightly countered that the longer term health of the Euro area economy required that confidence in the banking sector be restored and he suggested this issue should be resolved before end year. However, diagram 1 suggests what the ECB again described today as the ‘lagged relationship’ between lending with the business cycle tended in the past to be relatively short and the current divergence seems to testify to a more significant restraint on the current upswing.

Again, we feel lending data for the next few months could be an important influence on ECB policymaking 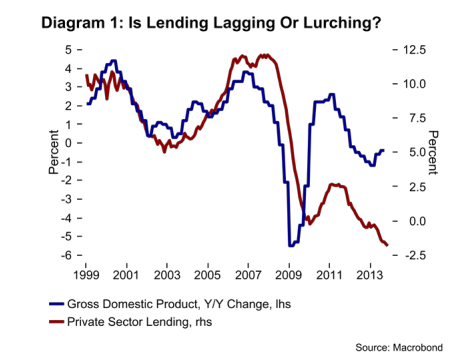 While Mr Draghi stepped up the rhetoric today on the possibility of further easing and we have outlined the substantive nature of the risks the Euro area economy faces, we don’t feel ECB action is imminent. In part, this is because the current environment is uncertain and a progressive if modest recovery in activity could slowly push inflation up towards the ECB target. More fundamentally, we don’t think the ECB has many straightforward options to ease policy and consequently we think it may require a marked change in conditions to prompt further action that would take the ECB into territory that is uncharted not only in terms of the economic or market implications but also perhaps in terms of its acceptability to public and legal opinion in Germany.

At 0.25%, the current level of the ECB’S refinancing rate affords relatively little room for manoeuvre. Repeatedly expressed concerns by a range of senior officials about the possible negative implications of moving to a negative deposit rate mean that while the ECB may be technically ready, such a course of action will not be taken lightly. Finally, confusion continues as to precisely what form or scale of asset purchases would be compatible with the ECB’s mandate. Mr Draghi repeatedly referred today to the ECB’s readiness to act and to use ‘all instruments allowed for by the treaty’. However, his choice of words may reflect an effort to ECB Continues To Emphasise Willingness To Ease Further9 January 2014 5 emphasise determination while simultaneously seeking to placate some concerned Germans that merely serves to highlight the difficulties the ECB faces in this regard.

Markets To Focus On Possibility Of Further ECB Action

We think the risks highlighted by Mr Draghi today in the shape of poorer financial or economic conditions in the Euro area are sufficiently threatening that markets will continue to focus on the possibility of a further ECB easing. However, implementing further action may not be a simple process. Indeed, in the near term, perhaps the most significant action that the ECB will take is to continue this sort of ‘verbal easing’.

This approach would have the added benefit of signalling ECB policy is at a different point to either the US where tapering has begun or even the UK where there have been some calls from senior politicians for the Bank of England to take action against the threat of runaway house price inflation. In turn, this should influence the spread between respective Government bond yields as well as currency trends.

However, as has been the case for some time, the key question is whether disappointing news on inflation or activity in The Euro area in coming months may require the ECB to contemplate altogether more radical action. Mr Draghi’s comments today would seem to push the ECB at least a little further in this direction.