Official data on residential property prices show prices were fractionally higher on a monthly basis in June (+0.1%) as a monthly rise of 0.4% in prices outside Dublin broadly offset a decline of 0.4% in Dublin prices. Overall, these figures are consistent with a range of other surveys and reports that suggest recent months have seen some cooling in price trends in Dublin and some improvement in prices elsewhere. The previously rapid pace of price increases in the Capital, Central Bank restrictions on LTV and LTI limits, a modest increase in market supply as well as some geographic widening of the economic upswing likely all played some role in the easing and broadening of price growth of late. The precise influence of each of these factors probably varies considerably across market segments and individual properties.

The 10.5% year-on-year rise in Dublin house prices is the slowest since August 2013 but this has to be seen in the context of an unsustainable pace of increase through 2014 (averaging 20.4% for the calendar year). According to the CSO, prices have been flat to marginally softer in Dublin since the end of last year leading to a progressive easing in the annual increase from 24.7% last August.  A spill-over from Dublin caused prices outside the capital to pick up in the second half of last year. As a result, the annual rate of increase in prices outside Dublin which averaged 5% in 2014 picked up through the spring to just under 12% before easing back to 9.7% last month.

Separately today, BPFI released mortgage approvals data for June. The graph below compares the CSO property price data (in blue) with the average value of approved loans for house purchase (in red). The CSO series is notably smoother as it corrects for variations in property type and location but both hint at a modestly upward trend in prices and both highlight the influence of outsized price increases through 2014 that now seem to be normalising. 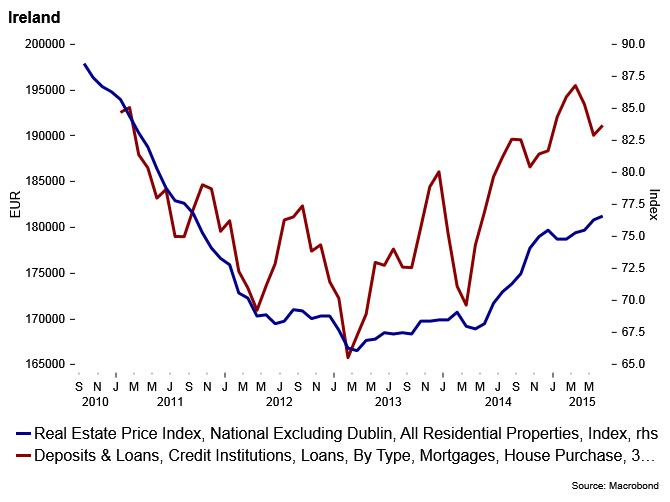 The months ahead should see a further easing in property price inflation to a more sustainable pace. As we don’t expect the remainder of 2015 to repeat the outsized monthly gains seen in the second half of last year, annual rates of property price inflation should continue to moderate in coming months. Because of strong gains to date, the average increase in prices nationwide in 2015 is likely to be in the region of 9% compared to an average increase of 13% in 2014.

A very positive ‘macro’ backdrop in which increases in employment and incomes become broadly based, fiscal policy begins to support household spending power and demographics remain supportive should support the persistence of a healthy positive trend in Irish residential property prices in coming years. However, this is likely to be notably more modest than the pace of increase seen in the past year or so. Of course, the ‘equilibrium’ path for Irish house prices will depend on the performance of the Irish economy, the trend in house building and the interest rate cycle among a range of influences. Our best guess at this point is that this would entail average annual increases in property prices somewhere in the 2-5% range.