The regional breakdown of the Irish Consumer Sentiment Survey shows that consumer sentiment has weakened far more sharply in Dublin than elsewhere in Ireland of late. A notably more pronounced drop in confidence in the capital than in the rest of the country in the final quarter of 2016 may reflect a number of factors. First of all, Dublin consumers may be more sensitive to uncertainty about the global economy than their counterparts in the rest of Ireland. Second, the comparative resilience of consumer confidence outside Dublin could stem from a broadening and strengthening of domestic economic activity in the past year. Finally, the poorer Dublin reading in late 2016 could owe something to a greater incidence of economic difficulties such as pressure on accomodation in Dublin of late.

As the table above shows, the Dublin consumer sentiment index fell to 137.8 from 150.1 in the previous three months. While sentiment also eased back in the rest of the country, the drop in the index was relatively modest to 151.5 from 154.2

The drop in the past three months was the largest quarterly decline in confidence in four years in the indicator for the capital and pushed the Dublin consumer sentiment index to its weakest level since the end of 2014. The mood of consumers in the rest of Ireland also dropped to its lowest reading in two years but, as diagram 1 illustrates, the turnaround in the thinking of consumers in the capital has been much more dramatic of late.

It should be noted that, on balance, current readings imply that consumers in Dublin and across the rest of the country still envisage some improvement in the general economic climate and, in their own financial circumstances. However, such expectations are now much more narrowly based than they have been for the last couple of years.  So, there is notably less confidence of late that the Irish economy will deliver strong growth or any improvement in consumers’ personal finances. 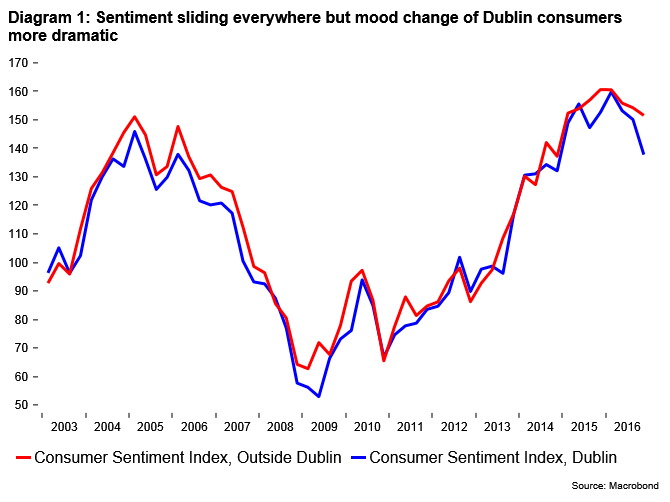 Consumer thinking on Irish economic prospects has been on a weakening trend for some time. Diagram 2 suggests Dublin consumers have been progressively downgrading their outlook since the summer of 2015 and their counterparts elsewhere in Ireland began to strike a more cautious tone early last year. The scale of retracement has been broadly similar inside and outside the capital since this reassessment began but the deterioration in the final quarter of 2016 was notably sharper in Dublin than elsewhere.

This poorer assessment of late could be the product of two distinct sets of influences. First of all, the economy of the capital may be particularly sensitive to developments abroad and this could have translated into concerns about possible shifts in US economic policies under the Trump presidency as well as ongoing nervousness about the potential impact of Brexit on the Irish economy. Second, there may also be some reassessment of the benefits and costs of the current economic upturn in the capital particularly in light of substantial pressures in areas such as housing. 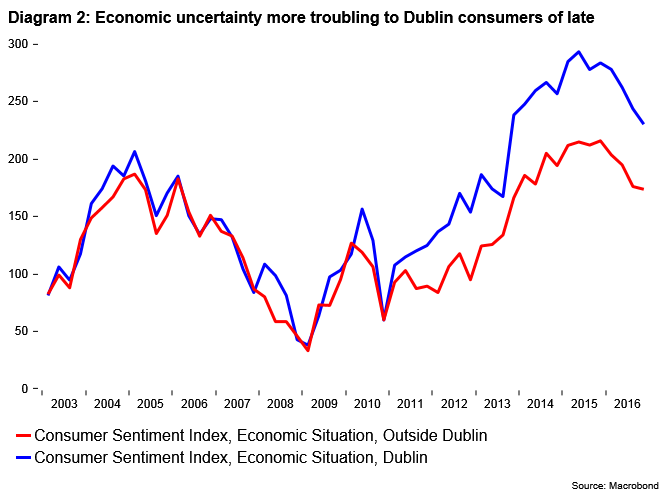 The comparatively large downgrade of the outlook for jobs by consumers in the capital depicted in diagram 3 seems entirely consistent with the view that concerns about a more uncertain global outlook drove notably poorer views on the general economic outlook by Dublin consumers in late 2016. This likely reflects the particularly high profile of a host of multinational companies located in Dublin and nervousness about their future in the wake of dramatic shifts in the policy focus of the US and UK during 2016.

The final quarter also saw a marginal weakening of the jobs outlook by consumers across the rest of Ireland and, as diagram 3 makes clear, this came from a weaker initial starting point. However, the comparative resilience in this element of the survey outside the capital of late likely reflects the greater importance of domestic economic drivers to job prospects across much of regional Ireland. 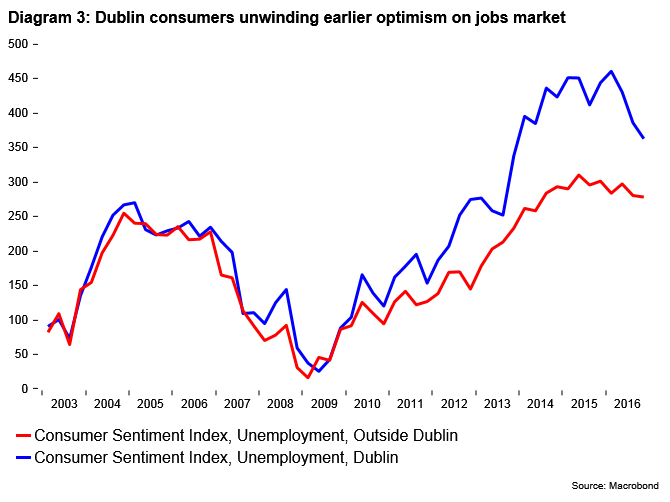 Views on the outlook for their own personal financial circumstances diverged notably between consumers in Dublin and the rest of Ireland as diagram 4 depicts. This may be explained in part by the particular importance of an emerging upswing in domestic economic activity to conditions outside the capital. Assisted by the relatively recent shift to a more supportive fiscal stance as well as the geographical broadening of the Irish economic recovery of late, consumers outside the capital may now be a little more confident that their household finances can improve in 2017.

In contrast, Dublin consumers may be marrying the risks from a possibly more hostile global environment to more localised concerns about their own standard of living because of pressures on housing and related concerns in a variety of areas.  In circumstances where limited progress is envisaged on such issues in the short term, it may be that Dublin households envisage a deterioration in their financial circumstances in the year ahead. 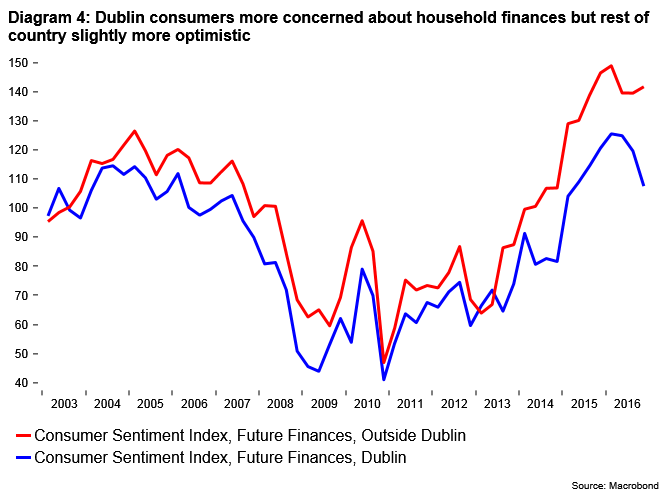 Not surprisingly, a more nervous outlook prompted a greater measure of caution in spending plans in the final months of 2016. As diagram 5 illustrates, this pullback was somewhat more pronounced in the capital than elsewhere, an outturn that accords with the generally more downbeat tone of Dublin consumers’ responses to other elements of the survey. While clearly weaker than preceding quarters, it should be noted that the results for late 2016 are still consistent with some increase in spending by Irish consumers. The survey is pointing to increased caution rather than a collapse in the Irish economy. 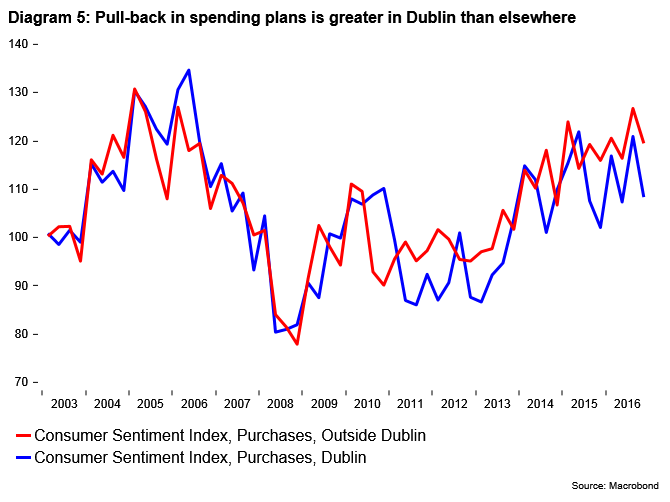