Patience the watchword as March ECB decisions still being rolled out.

ECB focus now on implementation of previous decisions not on further action.

So, forward guidance emphasises accommodative policy to be ‘preserved’ with policy rates here or lower for ‘extended time’.

ECB facing difficult questions as to whether it could or should ease further.

Mario Draghi, the ECB President was probably delighted to be dull today. There was little market reaction to his pronouncements at the ECB’s regular press conference.  The fact that the ECB had announced a significant number of major policy initiatives at its previous policy meeting just six weeks ago was good enough reason for Mr Draghi to look for today’s press conference to pass without much notice. However, his desire not to have his comments attract attention today was made altogether greater by the adverse financial market reaction to the March policy changes and, more particularly, to the press conference that elaborated on them.

Although the ECB launched a major easing in March, the firming in market interest rates, sell-off in equity markets and rise in the exchange rate of the EURO that immediately followed Mr Draghi’s pronouncements  was more typical of the traditional response to a tightening rather than a loosening of policy. The key driver was the market interpretation that some comments made by Mr Draghi at the press conference that explained the March decision might be signalling the era of ECB easing could be drawing to a close.

While Mr Draghi was suitably low key in his remarks today, he clearly repeated the ‘corrective’ tone of a range of various ECB comments made in the wake of the market reaction to the March press conference. He emphasised both the ECB’S confidence that, given time, its current policy stance should deliver an improvement in activity and inflation as well as its commitment to ease further ‘if warranted...using all the instruments available within its mandate’.  Lest there was any doubt, he also placed a heavy emphasis on the word ‘all’ when repeating this wording in response to a question at today’s press conference.

The main message from today’s press conference is that the ECB now sees its main task as putting in place the various measures announced in March and allowing time for the associated very accommodative policy environment to help strengthen economic growth and inflation. A key consideration is that this process will take time. In today’s Q&A session Mr Draghi acknowledged that ‘we should be patient about low inflation for a long time’. This is not unreasonable in view of the normal lags with which monetary policy operates and the many ‘headwinds’ in the current environment ranged against it.

We think that two other factors are particularly influential in the ECB’s emphasis on this line of reasoning at present. The first is a frustration at almost ceaseless market pressure for repeated policy responses to any indication of lacklustre activity or weak inflation. In circumstances where the gyrations of the oil market could lead to significant volatility in upcoming inflation readings and other ‘geopolitical risks’  such as the looming UK referendum on EU membership are also exerting some influence on markets, the case for ‘activist’ monetary policy is notably reduced.

Quite apart from the difficulty in separating signal from noise in the current environment is an altogether more deep rooted division as to whether the ECB’s scope for further easing is all but exhausted. There are two distinct but not unrelated constraints in this regard, one that concerns popular support, the other focussed on technical limitations. Mr Draghi noted today that if the credibility of a Central Bank is questioned- as might be suggested by the nature of recent criticism of the ECB in Germany, its effectiveness may be impaired. The strained conditions of recent years mean similar concerns have almost become the norm rather than the exception when the ECB (and other Central Banks) feature in public discussions. However,  they take on a notably greater significance if, as seems to be the case, there is now also a strong sense among some ECB officials that a combination of diminishing returns and dwindling facilities mean the ECB may either be unable or should be unwilling to ease policy significantly further.

In such circumstances, an uncomfortable compromise in regard to what the ECB can and should do may entail an increased role for forward guidance. A less troublesome rationale also supporting such a course of action is provided by a desire to signal clearly the fundamentally different policy stance now and likely to persist for some considerable time between the ECB and the US Federal Reserve. Drawing on these diverse influences, today’s ECB statement argues that ‘it is essential to preserve an appropriate degree of monetary accommodation as long as needed in order to underpin the momentum of the euro area’s economic recovery and in order to accelerate the return of inflation to levels below, but close to, 2%.’  This amplifies the message introduced in March and repeated today that that the ECB’S key interest rates are expected ‘to remain at present or lower levels for an extended period of time, and well past the horizon of our net asset purchases.’

While the ECB was clear in recognising continuing risks to the downside in the economic outlook, Mr Draghi struck a reasonably upbeat note today in terms of a conviction that that a moderate recovery is continuing and that ECB policy measures are now contributing significantly to this upturn. When asked, he was very careful not to provide any quantitative estimate of how much impact the measures announced in March might have on the recovery.

Our sense is that they will help significantly but some indication of how significant the headwinds to monetary stimulus might be is suggested by the diagram below that sets out the levels of loans outstanding to Euro area households and non-financial corporations which shows how limited the impetus to credit growth has been in recent years. 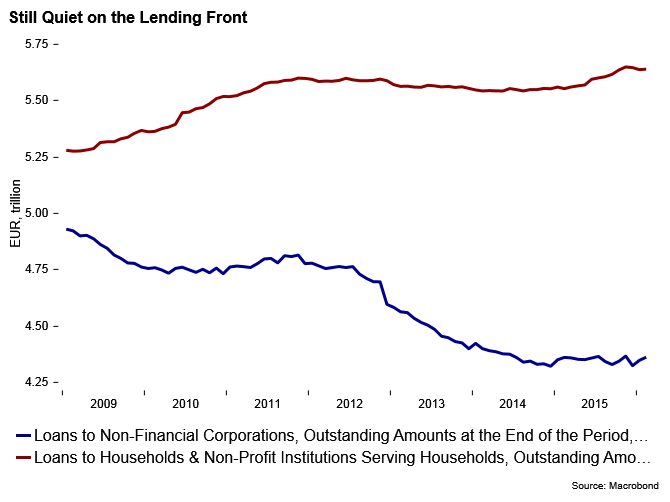 The ECB is now in a very awkward position in which it will likely seek to resist any externally driven tightening in financial conditions in the Euro area while any further downgrading of the outlook to either inflation or activity may prompt calls for further easing that the ECB may find as difficult to resist as to implement.

While clarification of the precise dates for the new targeted longer-term refinancing may spark an increased focus on the potential role of this measure in improving financial conditions, practical details were announced today regarding the corporate sector purchase programme (CSPP) which will become operational from June. The details provided indicate that investment grade euro-denominated bonds issued by non-bank corporations will be eligible. The bonds can have a maturity up to 30 years and the ECB will be limited to purchasing no more than 70% of the outstanding amount of the issue. These fairly generous boundaries may hint at the difficulties in building this programme to a meaningful size. We continue to think the ‘micro‘ effects in particular segments will entirely dwarf any broader ’macro’ effects  of this measure.