...so, he feeds  market fears of rising bond yields and boosts euro.

…and no consideration given to early end to bond buying.

Although the ECB didn’t signal any major shift in its thinking today, there were several important messages in ECB president, Mario Draghi’s comments to the regular post-meeting press conference. However, markets largely ignored some fairly cautious comments on the Euro area economy and related comments on the outlook for ECB policy that were clearly dovish. Some implicitly worrisome comments on Greece also commanded little attention as markets concentrated on what is a more immediate issue for many traders; or namely the ECB’s attitude towards notably increased volatility in financial markets of late.

Markets Hear Only One Thing Today

It is not entirely surprising that traders chose to focus entirely on one particular element of Mr Draghi’s remarks today-the inference that the ECB would not intervene to limit volatility in markets. This prompted a significant rise in bond yields and a stronger Euro on FX markets. While this reaction is understandable, it says far more about current market anxieties than it does about the likely course of ECB policy. It reflects a further reassessment by traders of the power of the ‘Draghi put’ that helped propel bond yields progressively lower through the past couple of years  and seemed to have been notably strengthened by  the launch of the ECB’s asset purchase programme in early 2015.

The reassessment evident in the recent rebound in Euro area bond yields and in the exchange rate of the Euro against the US Dollar is clearly seen in diagram1. This diagram also suggests the move was tempered briefly by comments by ECB executive board member Benoit Coeuré in mid- May when he suggested that the speed of the sell-off in European Government bonds was worrisome and perhaps more than coincidentally indicated that the ECB  would temporarily step up its bond purchases to overcome potential problems in undertaking large transaction volumes in holiday-thinned markets later in the summer. Mr Coeuré's remarks may have encouraged some to believe that the ECB would act against excessive market movements-a belief that Mr Draghi’s comments today seem to have undermined. 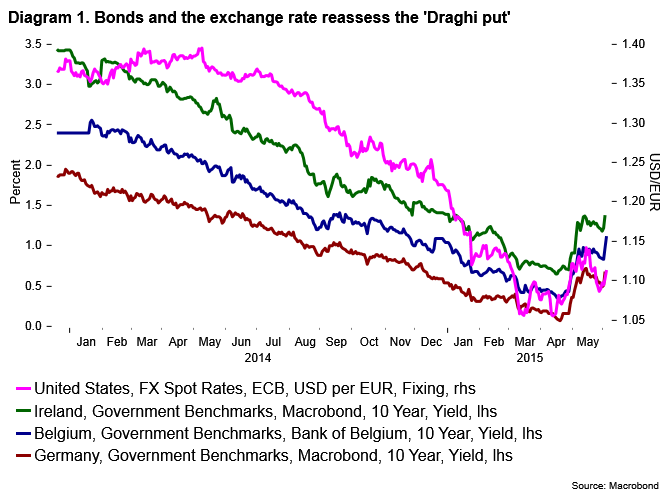 Rather than any suggestion that the ECB would act to limit volatility or the pick-up in yields, Mr Draghi indicated ECB policymakers would ‘look through those developments and maintain a steady course’. He went even further and outlined a couple of what we might term ‘fundamental’ arguments for rising bond yields (and presumably by extension a stronger Euro exchange rate) of late , namely the upturn in Euro area growth and inflation. In addition, he pointed to several technical arguments including previously one-directional movements encompassing a lengthening of investment maturities, significant new bond issuance , liquidity constraints and self-feeding momentum as the turn in bond yields developed.

Although Mr Draghi was very careful not pass judgement on these considerations, there is some sense in his remarks that the ECB regarded previous trends as unsustainable and therefore unwelcome and, consequently, a correction may be a necessary element in a return to more normal trading conditions. In any event, it would be extremely uncomfortable for the ECB to assume responsibility for micro-managing Euro area bond markets given the difficulty it has had in trying to restore money markets to anything approaching normal functioning.   Of course, there is also an acute awareness that an eventual if likely gradual tightening in US monetary policy will affect Euro area bond yields and the ECB cannot make unrealistic promises about the extent to which it can insulate the Euro area from such influences.

We think there is a wide range of reasons why the ECB feels it shouldn’t and couldn’t act to limit volatility in bond yields. At the margin, a willingness not to intervene against rising market yields may also act to reassure some important internal critics of the asset purchase programme within the ECB and could even counter arguments that an early tapering of the programme might be required.

While they were overshadowed by the markets response to Mr Draghi’s remarks on volatility, several other comments he made today are worthy of note in terms of what they tell us about how the ECB sees the world at present and how it sees policy evolving into 2016. There was a clear determination to emphasise that ECB policy will remain on its current very accommodative course – no deviation in the scale or length of the bond-buying programme is envisaged.

This is linked to a another quite significant message that while the ECB is confident that a sustainable economic upturn is now underway, it is still fairly cautious about the scale of the recovery and consequently not concerned that inflation might rebound too rapidly. So, there is no cause to contemplate any change in policy settings. As Mr Draghi indicated a number of times today, the improvement in growth and gradual recovery in inflation anticipated by the ECB are conditional on the full implementation of the Asset purchase programme.

At the margin, Mr Draghi’s economic assessment was probably a little more downbeat than might have been expected. Today’s press statement that says ‘Looking ahead, we expect the economic recovery to broaden’ represents a small but significant change by dropping the words ‘..and strengthen’ from a similar phrase in April’s statement. While Mr Draghi indicated that the ECB had expected somewhat stronger data than had materialised of late, the important take-away is that the ECB have accordingly downgraded their expectations for the future.

The new ECB projections present a carefully nuanced view of a recovery that is strong enough to be self-sustaining but not so strong that it threatens a problematic recovery in inflation. In fact, the detailed ECB forecasts paint a rather lacklustre upturn in which unemployment remains elevated-averaging 9.9% in 2017. Although Mr Draghi hinted at a significant structural element to the jobless figure, the fact that growth in compensation per employee has been downgraded by 0.3% for both 2015 and 2016 in today’s projections from those made three months ago implies the upswing lacks a pronounced ‘feel-good factor’.

Today’s new estimates also see a notable downward revision to investment growth in both 2016 and 2017 which means overall GDP growth is now seen fractionally lower in 2017 at 2.0% rather than 2.1%. The commentary notes that ‘the recovery of business investment will be held back by the remaining uncertainty, financial bottlenecks and weaker potential output growth prospects’. Although these bottlenecks are not identified, elsewhere the projections speak of ‘ample spare capacity and still high levels of corporate debt in some countries’.  Traditionally projections are repeatedly and progressively revised upwards as recovery takes hold but perhaps mindful of previous false dawns, the ECB staff sees the Euro area facing a fairly steep climb out of current weakness.

Inflation Outlook Is Not Threatening- In Either Direction

The past couple of months have seen Euro area inflation marginally higher than market expectations. Although Mr Draghi noted that the ECB itself had anticipated these slightly higher readings, they probably play some role in the increase in the 2015 projection for inflation to 0.3% from 0.0% envisaged in March. Other factors contributing to this are higher oil prices oil and a weaker exchange rate than assumed previously. Importantly, however, these influences are seen having a temporary rather a lasting impact. As a result, inflation projections remain unchanged for 2016 at 1.5% and 2017 at 1.8%. It could be that any additional upside pressures from oil prices and currency movements are countered by the 0.3% downward revision to unit labour costs in both 2015 and 2016. The counterweight provided by a weaker trend in labour costs to what are essentially once-off elements may underpin the ECB’S emphasis on awaiting confirmation of ‘a sustained adjustment in the path of inflation’.

While the ECB is reasonably comfortable with the outlook for inflation, it faces far more immediate problems in the shape of ongoing difficulties in Greece. Mr Draghi did his best today not to be drawn on the current state of play in relation to tortuous discussions between Greece and its official creditors. However, he repeatedly called for a ‘strong agreement’,  defining this as one which would hold out the prospect of strong economic growth, social fairness and fiscal sustainability. Mr Draghi also noted that a strong will exists that agreement be found. However, against increasingly pressing deadlines, the limited capacity to reach a consensus between Greece and its partners as to what these elements might mean in practice never mind how they might be implemented seems questionable. In this respect, Mr Draghi’s comments today suggests the scope for accidents to happen if some limited and likely temporary deal is not quickly reached.