There were no major surprises from today’s ECB policy meeting. Probably, the most notable feature of ECB president Mario Draghi’s press conference was the extent to which he endeavoured – not entirely successfully- to talk down the Euro. However, Mr Draghi’s dovishness did produce a further softening of market interest rates as traders concluded that ECB policy will remain easier slightly longer.

There was no prospect of any immediate change in ECB policy today but there was some expectation that Mr Draghi would provide some indications in relation to future changes in the ECB’s policy stance, particularly in terms of alterations to and/or exit from its Asset Purchase Programme.

Mr Draghi did indicate that there were ‘very preliminary’  discussions on various topic relating to the winding down and eventual exit from QE at today’s ECB meeting but he emphasised these were mostly confined to asking questions about the pros and cons of various scenarios entailing different lengths and purchase amounts that might be considered in the future.

Mr Draghi is right in his assertion that amending or ending the ECB’s ‘current very substantial degree of monetary accommodation’ will entail many complex decisions but the tenor of his comments today suggested the key issues occupying the ECB are not technical in nature.

The ECB seems anxious not to tighten prematurely either by altering its QE programme or policy interest rates or, more immediately, by hinting at future policy moves and causing market moves that lead to a tightening of financial conditions.  The clear and present danger in this regard is the risk of a further sharp rise in the exchange rate of the Euro.

Unusually, today’s ECB press statement highlights FX developments - in its opening assessment of the economic environment, noting that ‘the recent volatility in the exchange rate represents a source of uncertainty which requires monitoring with regard to its possible implications for the medium-term outlook for price stability’.

Of course, Mr Draghi and his colleagues aren’t really worried about volatility in the sense of exaggerated two-way moves or choppy market conditions. As diagram 1 below illustrates, the threat that concerns the ECB at present is that expectations of the looming announcement of tighter monetary policy could be the catalyst for a sharp trend move of the sort that has characterised the single currency’s performance since its inception. 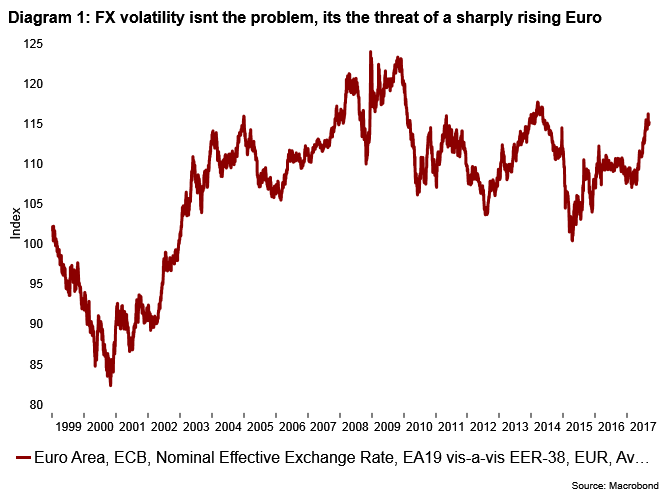 Clearly, a rapid or large rise in the Euro’s exchange rate would weigh on economic growth and inflation in the Euro area. While Mr Draghi reiterated that the exchange rate is not a policy target, he added that it is very important for growth and inflation. Some sense of the difficulty a rapidly rising exchange rate might pose is hinted at in the ECB’s latest projections which encompass a roughly 5% appreciation in the currency relative to the previous forecasts which were published in June.

Of course, the rise in the exchange rate is not the only notable development in the past three months.  In the interim, a range of indicators have testified to the strength of the recovery in the Euro area at present. Economic growth in the second quarter of 2017 is now put at 2.3%, the fastest pace in six years and sufficient to support the strongest employment gains since early 2008. As a result, the ECB has revised up its GDP growth projection for this year from 1.9% to 2.3%. In other circumstance, it might be expected that momentum would build further in coming years but the ECB has maintained its previous estimates of 1.8% in 2018 and 1.7% in 2019.

Although domestic spending is expected to be stronger than was envisaged three months ago and is enhanced by stronger ‘real’ purchasing power, this is offset by a softening in export growth. As the ECB has not altered its outlook for world growth, this pullback is presumably due to the impact of a stronger Euro. Indeed, today’s press statement adds ‘developments in foreign exchange markets’ to its list of downside risks to growth.

More fundamentally, from an ECB perspective, a rising exchange rate reduces its capacity to bring inflation back to target. Today’s new projections are unchanged for 2017 but show a downward revision of 0.1% in each of the next two  years to leave inflation at 1.2% in 2018 and 1.5% in 2019. Moreover, the new projections show a slightly larger downgrade to underlying inflation in 2019 from 1.7% to 1.5%, leaving this measure falling well short of the ECB’S target of ‘below, but close to, 2%’.

The coincidence of a strong economy and a strong exchange rate is not unusual but it does put Mr Draghi and his colleagues in a very awkward position at present. ECB research finds that a 1% movement in the exchange rate prompts a movement in consumer prices in the opposite direction of about 0.1% within a year and 0.2-0.3% within three years. In a world characterised by low inflation, further significant FX appreciation might be seen as threatening to prevent the ECB from reaching its inflation any time in the foreseeable future.

Some rationale for a particularly dovish stance in these circumstances might be suggested by ECB research (referred to by Mr Draghi today) that suggests the impact of exchange rate movements on inflation varies depending on the cause of the currency move. This research finds that ‘when a monetary policy shock drives the nominal exchange rate, a relatively larger pass-through tends to be generated.’ (ECB bulletin 7 2016, p47).

This research would suggest that ECB policy ‘surprises’ are likely to have a particularly marked impact on inflation and would appear to argue for a ‘softly, softly‘ approach at present.  Reflecting such considerations, Mr Draghi hinted that there was some significant discussion at today’s meeting as to the precise factors behind the Euro’s recent strengthening.  A sense that opinions might differ on this issue might be hinted at in Mr Draghi’s remark that such considerations needed to take account of ‘the credibility of monetary policy’.

It might be an exaggeration to say today’s ECB press conference was all about the exchange rate but it is clear that it is posing Mr Draghi and his colleagues particularly tricky questions at present. This is also postponing any prospect of clarity on when and how quickly the ECB will begin to exit from its QE programme.  Mr Draghi indicated that there hadn’t been any discussions today on important issues such as the sequencing of policy changes or possible changes to the features of the Asset Purchase Programme such as issuer or issue limits.

These remarks may have been intended to emphasise that the point of departure remains some time away but, in an important sense, these sorts of uncertainty may be adding to pressure on the Euro as markets may have already priced the currency on the expectation of a looming first step away from QE.

If, as Mr Draghi suggested today, many of the important decisions should be agreed by the ECB’s October policy meeting on October 26th, the reaction of interest rate or FX markets may not be that dramatic. Traders should be able to cope with the impact of a gradual phasing back of QE during 2018 to be followed by modest rate rises that wouldn’t commence until ’well past the horizon of our net asset purchases’.

However, problems could arise if the ECB delays too long in setting out some broad contours for its exit path. Such problems would be aggravated if Eurozone growth or inflation were to strengthen in coming months and these or other factors were to drive the Euro exchange rate higher.  It is entirely understandable that the ECB would want to prepare properly for its exit from QE but there is a risk that in trying to be too careful, it ends up having less room for manoeuvre than it wants.

Mr Draghi repeatedly urged the need for ‘patience’ today- a commodity frequently in short supply in markets. However, he also indicated that he expected the ECB’s inflation target would be met by 2020- an outcome that should be revealed when formal forecasts for that year are produced in December.

In coming months, markets may begin to debate whether such an outcome would warrant a material shift in the required monetary stance of the ECB- perhaps on a larger scale than the ECB now envisages. Such developments could prompt notably more volatile conditions in FX and interest rate markets than either the ECB or investors now envisage.