• Irish growth data very volatile, subject to revision and weaker than many other indicators of activity of late.


Revised Irish growth data for 2012 and a preliminary estimate for the first quarter of 2013 are disappointing in that they suggest growth is on a somewhat weaker trajectory than generally envisaged. They imply growth this year could be weaker than our previous forecast of GDP growth of 1% for 2013 as a whole. However, the inherent volatility in these data coupled with encouraging trends in many other indicators, particularly employment, argues against any major downward revision at this point in time. For these reasons, we have scaled back our estimate for 2013 GDP growth to +0.7%.We still see positive growth overall but building significant forward momentum is proving something of a struggle.

The influence of poorer conditions in export markets, ongoing fiscal adjustment at home and a range of technical factors all played some role in today’s poorer than expected growth data. However, a modest improvement in employment, comparatively upbeat survey data and trends in tax receipts paint a more positive picture of recent Irish economic developments and argue against simply extrapolating today’s first quarter growth figures into a projection of continuing economic weakness through the remainder of the year. As diagram 1 below illustrates, the Irish economy appears to still be in an extended ‘bottoming-out’ process. 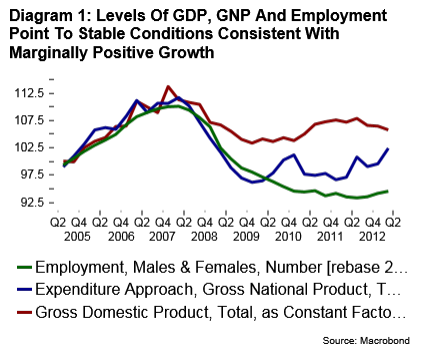 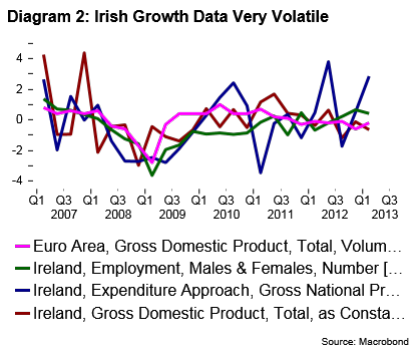 Today’s revised data for 2012 show notably weaker export growth last year than the previous CSO estimate published in late March implied (2012 exports are now seen at +1.6% compared to an earlier figure of +2.9%). This reflects both a weaker trend in goods exports (-3.6% v -2.8%) and in services (+6.9% v +8.9%). Investment was also weaker (-1.2% v +1.2%) largely because of weaker spending on machines and equipment than previously thought. In contrast, consumer spending was not quite as weak as previously envisaged (-0.3% v -0.9%).An offset to the weaker 2012 outturn is a substantial upward revision to 2011 GDP growth from +1.4% to +2.2%. This highlights the potential for significant future revisions to today’s data.

Separately today the CSO released a preliminary estimate of growth in the first quarter of 2013. This suggests broadly based weakness with consumer spending (-3.0% quarter-on-quarter) and exports (-4.6%) both sharply down. Investment (-7.4%) fell even more dramatically but this reflects a significant influence from a collapse in spending on machinery equipment (-21%) that likely owes much to weakness in imported aircraft. Construction investment fell by an altogether more understandable 1.3%). We think the ‘lumpy’ nature of pharmaceutical exports that makes for volatile quarterly data, the introduction of the new ‘131’ and ‘132’ car registrations and even the timing of Easter explain part  but not all of the weakness in q1 GDP. We would also note that measured from the output side of the economy, activity grew in the first three months of 2013 while there was a significant fall in activity as measured from the expenditure side. The average of the two shows a negative outturn but these divergent estimates again emphasise the problems in these data.

So, Outlook For Marginally Positive Growth In 2013

On the basis of pronounced weakness in retail sales and merchandise trade data for the first quarter, we had expected a drop of 0.3% in first quarter GDP. So, today’s number is only marginally poorer than that underlying our previous full year forecast for 2013 GDP growth of 1%. Reflecting the inherent volatility in these data and more encouraging evidence from other indicators, we are revising our forecast for 2013 GDP growth down modestly to +0.7%. This also leads us to pare back our 2014 GDP forecast to 2.1%. As described below, the forecast for 2014 assumes that some €700mn of savings from the promissory note deal is used to reduce the adjustment in Budget 2014 from €3.1bn to €2.1bn.

What Should This Mean For Budget 2014?

Today’s data offer a little more context on the balance of risks surrounding Budget 2014 (the level of GDP for 2012 was revised up marginally so the critical deficit-to-GDP ratio remains at 7.6% for last year and is not hugely threatened for 2013). Clearly, the Irish economy is still some distance away from what might be regarded as a healthy and clearly sustainable trajectory in activity. In the main, risks to the outlook for activity in 2014 are still weighted towards the downside, even if the pace of growth is expected to be somewhat stronger than this year.

The main risks to the Budgetary position arise from various forms of downside risks to the economic outlook rather than from any difficulties with the implementation of Budget measures. In such circumstances, it may be argued that Budget policy should err towards supporting growth rather than exceeding agreed targets for deficit reduction. This would imply that Budget 2014 should use some of the scope provided by the promissory note deal to reduce the amount of adjustment envisaged for the coming year. It may be prudent to retain some measure of comfort. So, it might be argued that some €700mn of the estimated €1,000mn promissory note savings should be deployed to lessen the scale of adjustment implemented in Budget 2014. Following the originally planned adjustment of €3.1bn and leaving a larger cushion until 2015 might encourage less economically efficient and possible more pro-cyclical measures being introduced ahead of the next general election. We also feel financial markets are more focussed on the emerging trend in countries economic growth rather than their willingness to push austerity harder.

Is It Really A Recession?

While it is a common practice to use two quarters of negative growth as a ‘shorthand’ definition of recession, this is not the approach taken by the National Bureau of Research, the official arbiter of recession in the US. Similarly, the Centre for Economic Policy Research, which provides estimates of European business cycles, refers to:

As diagrams 1 and 2 indicate, the decline in quarterly GDP since mid-2012 has coincided with a period of consistent if modest growth in employment and two of the three ‘down’ quarters in GDP reported positive GNP growth. The narrow definition of two successive quarters of negative GDP growth would also imply the Irish economy avoided recession through 2010 and 2011 before slipping back into weakness in late 2012, a pattern out of step with most analysis of our recent economic past. We would also caution that revisions to seasonally adjusted data are frequent and often large. We would characterise recent quarters as a continuation of an uneven and extended adjustment that recent trends in employment suggest should soon transition into a more consistent if still modest positive growth. 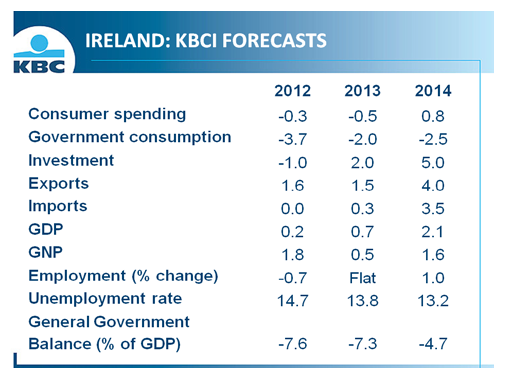