We see four arguments supporting the status quo at present

Possibility of significant change in ECB assessment as 2017 develops

By sticking almost word for word to the same script as that of the European Central Bank’s previous Governing council meeting on March 9th, ECB president Mario Draghi ensured a very dull outcome to today’s update from the ECB. Indeed, so limited was the change in tone that markets appear to have concluded that any eventual turn in the ECB’s policy stance might even be marginally slower to materialise than previously envisaged. As a result, there was a modest decline in term interest rates and fractional slippage in the exchange rate of the Euro in the immediate aftermath of today’s press conference.

The clear message from Mr Draghi today was not to expect any marked change in ECB thinking any time soon. While this can’t be contested, we see some risks that markets become too complacent about the possibility of a notable change in ECB signalling in the third quarter that might alter thinking on how far and how fast policy might change through 2018.

ECB has many reasons not to hint at change

We see as many as four complementary arguments as to why the ECB is reluctant to signal any early prospect of a change in its policy stance. First of all, it will want not to become a source of unnecessary uncertainty or volatility at a time when election campaigns particularly in France, to a lesser extent in Germany and possibly even in the UK have some potential to unsettle international financial markets.

In addition, the ECB wants to be entirely confident that the stronger conditions evident in Euro area activity of late have developed to the point where the potential for a return to markedly weaker conditions have all but disappeared. In one of the few areas where today’s press statement changed from its predecessor, it acknowledged risks to the economic outlook are ‘moving towards a more balanced configuration’ but even with this guarded acknowledgement of progress, the ECB continues to emphasise that those risks ‘are still tilted to the downside’.

We think the ECB may be overly cautious in this regard.  Today’s release of the European Commission’s economic sentiment data for April shows the strongest reading in this series since August 2007.  As such, it confirms the evidence of a host of other indicators pointing to exceptionally strong conditions at present and confirming what Mr Draghi did acknowledge in response to a question today that the recovery has moved from being ‘fragile and uneven’ to one that is ‘now solid and broadly based’. Indeed, as diagram 1 suggests, the historically strong relationship of Commission sentiment series with official growth data would seem to imply the prospect of robust increases in Euro area GDP in coming quarters. 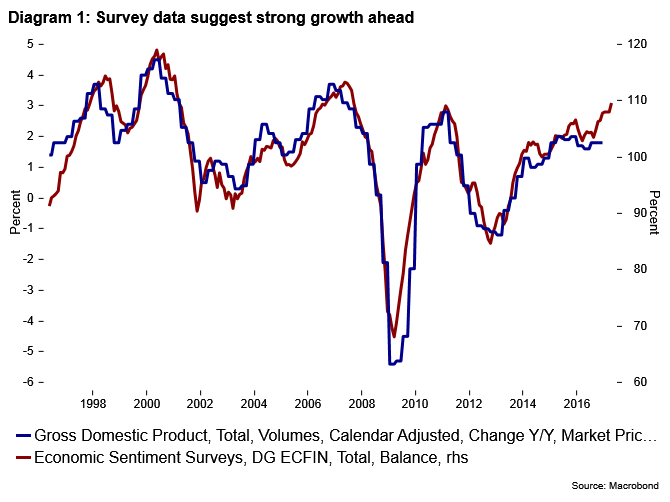 In these circumstances, both the likelihood of a relapse in growth and/or the threat that might pose to a clearly healthier Euro area economy at present would seem to have diminished appreciably. It is probable that the latest round of the ECB’s survey of professional forecasters concluded in early April will entail material upgrades to growth projections that will provide further comfort in this regard to the Governing Council.

A third rationale for a softly, softly approach in terms of discussing a potential future policy change is a concern that interest rate and currency markets might significantly front run or exaggerate the extent of any prospective change in ECB thinking. If there were to be sharp market moves, these might prematurely threaten the current ‘very favourable financing conditions’ that the ECB continues to regard as ‘necessary to secure a sustained convergence of inflation rates towards levels below, but close to, 2% over the medium term’.

Eventually, the ECB will want to signal its intention to undertake a policy shift but, clearly learning from the US Federal Reserve’s problems with the markets’ ‘taper tantrums’ in 2013, it does not want markets to move too early or too sharply in anticipation of that change.

A fourth argument for adopting a cautious approach is fundamental in nature rather than a timing issue.  How fast and how far ECB policy might be changed in the next year or two will be hugely influenced by the extent to which healthier economic growth translates into higher inflation. In the minutes of the ECB’s March meeting highlight, the Governing Council noted that the first quarter of 2017 seems set to mark ‘eleven consecutive quarters of quarter-on-quarter growth above the potential growth rate.’

A protracted period of strength of this nature might be expected to have translated into some measure of upward pressure on inflation. Diagram 2 below, which compares the trend in ‘core’ inflation with that in GDP growth 4 quarters earlier, suggests a substantial shortfall in inflation of late relative to the experience of the previous decade. Mr Draghi acknowledged today that ‘unutilised resources are still weighing on domestic wage and price formation’ and reiterated that this means that ‘measures of underlying inflation remain low and are expected to rise only gradually over the medium term’. 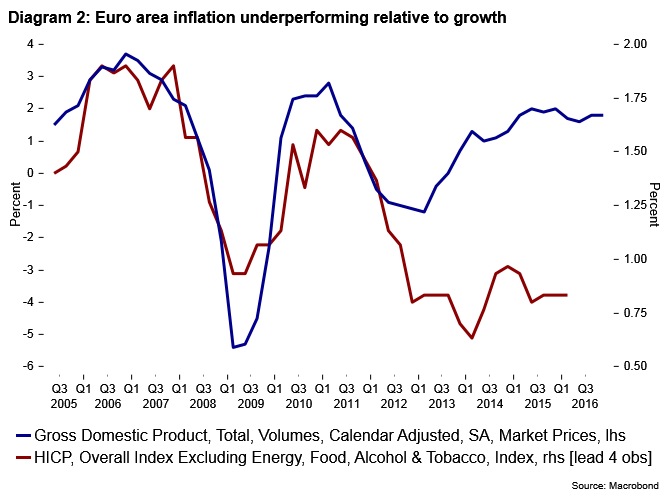 How quickly inflation might pick up may be a matter of significant debate in Frankfurt and is a particularly tricky issue for a central bank with a single price mandate and a medium term orientation. Although German and Spanish data released today suggest that the headline April reading for Euro area may increase to 1.8% from 1.5% in March, there is considerable inertia in underlying inflation which has been below 1% for a year and a half. This makes for a very unclear inflation outlook. Mr Draghi alluded today to ‘tentative signs of upward pressure in the early stages of the price chain’ but also accepted that the ‘outlook for wage growth is uncertain’.

Globally, there are signs that the responsiveness of inflation to stronger domestic conditions has weakened in recent years. In the US, a longstanding recovery means that for more than a year and a half unemployment has been at 5% or lower, traditionally levels that would be seen as consistent with full employment,. However, US wage growth remains subdued and inflation has yet to sustainably meet the Federal Reserve’s target.

Are markets calm or complacent?

With today’s ECB statement repeating the now well established mantra that policy will remain super-accommodative ‘until the Governing Council sees a sustained adjustment in the path of inflation consistent with its inflation aim’, it is understandable that markets see little prospect of any marked change in ECB policymaking any time soon.  In the immediate near term, that seems entirely appropriate but as the ECB prepares and publishes new sets of projections in June and September, a substantial re-appraisal can’t be ruled out.

When asked about the sequencing of an eventual policy shift, Mr Draghi quoted today from a speech he gave to ‘The ECB and its Watchers’ conference in early April, noting that ‘the forward guidance applied to our asset purchase programme – which is time- and state-dependent – extends also to our interest rate policy’.  This dual conditionality is unusual and could become a contentious issue for markets in the context of upcoming revisions to ECB projections.

While we don’t see any dramatic acceleration in price pressures through the next year or two, we expect a stronger trajectory in Euro area economic activity will come to be seen (at least by some at the ECB) as justifying some early scaling back of the degree of monetary support currently being provided. As Mr Draghi noted today, stronger growth conditions reduce the likelihood of tail-risk outcomes of extremely low inflation. We think the ECB face some difficulties in building a consensus and communicating its rationale for a measure of pre-emptive policy action through 2018. Such conditions could prove challenging for markets.

Managing expectations and intentions about the precise start and speed of a (likely gradual) withdrawal of the current monetary support could become quite difficult in the second half of this year. A further complication beyond the economic outlook is that after a possible easing in the significance of geopolitical considerations in the late summer and autumn, thoughts may turn to the implications for the Euro area of elections that must be held in Italy before the end of the first quarter of 2018.

In summary, we see a constellation of factors arguing in favour of continuity in ECB words and deeds at this point in time. As a result, the tone of Mr Draghi’s comments today and the markets immediate response make perfect sense. However, we think there is a particular combination of ‘time and state’ influences at play at present that may not be nearly as supportive of the current ECB monetary stance in the second half of this year.

By not even hinting today at the likelihood of some tweaking of the ECB’s assessment at the next meeting in June and the probability of a signalling of less support in September, there is some risk that Mr Draghi may leave markets unprepared for what at very least is a series of small steps that lie ahead. As a result, there is a danger that the current calm makes markets too complacent about what may prove a quite challenging second half of 2017 for Mr Draghi.