Could a brief Brexit ‘holiday’ spark a summer pick up in Irish consumer spending?

Could a Brexit ‘holiday’ lead to a stronger summer spend?

Special Focus: Does inflation increase as we get older?

New sentiment data breakdown shows Irish consumers think their living costs increased by about 1.9% in the past twelve months- about twice the official inflation measure

Irish consumer sentiment edged marginally higher in June as news flow on the Irish economy remained positive and Brexit risks, while still substantial, may have seemed slightly less immediate as the race to become the next leader of the UK Conservative began.

The KBC Bank Ireland consumer sentiment index rose to 90.7 in June from 89.9 in May. This relatively small increase suggests there was no major change in the mood of Irish consumers last month. However, it is notable that this is the first time we have seen back to back monthly improvements in sentiment since mid-2017.

As similar sentiment metrics for the US, the Euro Area and the UK all weakened notably in June, it would seem that Irish consumer confidence was boosted by domestic influences. We think two partly related factors may have played some role.

The first is that, given the significant weakening in Irish consumer sentiment since last summer, consumers here may feel that they have now priced in as much personal pain as they might reasonably expect from a still very uncertain Brexit process. For most of the past year, Irish consumers have been bracing themselves for damaging fallout from an imminent UK crash-out from the EU. However, it still remains unclear exactly how or when Brexit might occur.

A renewed focus on the risk of a ‘hard Brexit’ from October 31st may see sentiment sour again. However, in the near term, an element of Brexit fatigue may be causing consumers to switch attention away from such risks to the reality of healthy Irish economic conditions at present.

A second influence acting on Irish consumers of late may be a continuing sequence of positive Irish economic data which recently highlighted strong jobs growth and solid wage gains. To the extent that these data capture the circumstances of the typical consumer, they suggest a significant counterweight to the threat posed by Brexit.

The details of the June sentiment index show consumers marginally more optimistic about the outlook for the Irish economy and jobs than they were in May. They were also somewhat more positive as to how their own household finances had developed in the past twelve months.  As a result, spending plans improved slightly even though some Brexit related nervousness is hinted at in a slightly weaker view of household finances over the next twelve months.

To the extent that recent sentiment data point to a marginal improvement in the mood of Irish consumers, we might see a slight pick-up in household spending through the summer months as consumers take a possibly brief ‘holiday’ from Brexit worries. In such circumstances, household spending might step up to a pace consistent with stronger gains in household incomes of late.

As the diagram below indicates, since the UK referendum the relationship between household income and spending appears to have changed. Irish consumer spending has traditionally moved broadly in line with household disposable income. Indeed, over the past twenty years outgoings have risen slightly faster than earnings.

However, since the UK referendum in mid-2016, nominal household spending growth increased by 3.7% on average compared to an average annual gain of 5.8% in household income. This pull-back in spending growth has coincided with a marked softening in consumer sentiment that we would attribute principally to Brexit related worries. Over, this period the cumulative spending shortfall is nearly 6%, implying Brexit concerns have produced a markedly cooler consumer spending climate than we might otherwise have seen. 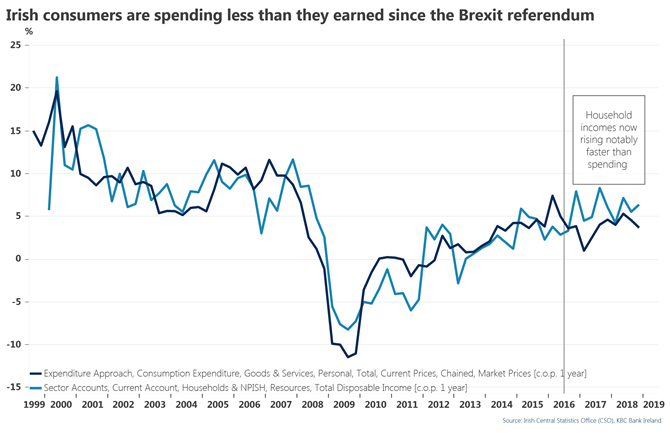 At the margin, it might also be noted that restrained household spending growth in recent years has coincided with a step up in Government spending, perhaps suggesting some possibility of ‘Ricardian equivalence’ type effects whereby forward-looking and recently bitten Irish consumers question the sustainability of such spending and adjust their household spending accordingly.  Finally, we should also acknowledge the possibility that Irish consumer spending has been under-recorded in recent years due to an increased incidence of online and physical purchases from the UK significantly prompted by Brexit –related weakness in Sterling.

Special Focus: Does inflation increase as we get older?

Each month, the sentiment survey asks Irish consumers how their personal financial situation has changed in the past twelve months and how they expect it to evolve in the next twelve months. A key influence on personal finances is how each household’s cost of living changes. While official data report the inflation rate for the hypothetical average Irish household, the reality is that the circumstances and shopping baskets of individual consumers vary widely.

As part of the June 2019 consumer sentiment survey, we asked respondents to indicate how much their household living costs had increased over the past twelve months. The responses given are summarised in diagram 2 and suggest that perceptions vary quite widely across consumers as to how living costs have changed.

As many as 31% think prices have fallen or stayed stable but the most common view (held by 33% of consumers) was that the prices of the goods and services they bought had gone up materially -between 2% and 5%, markedly more than the official inflation rate which for May stood at 1.0%. On average Irish consumers feel their personal inflation rate has been around 1.9% over the past twelve months, that’s almost twice the latest official inflation rate. 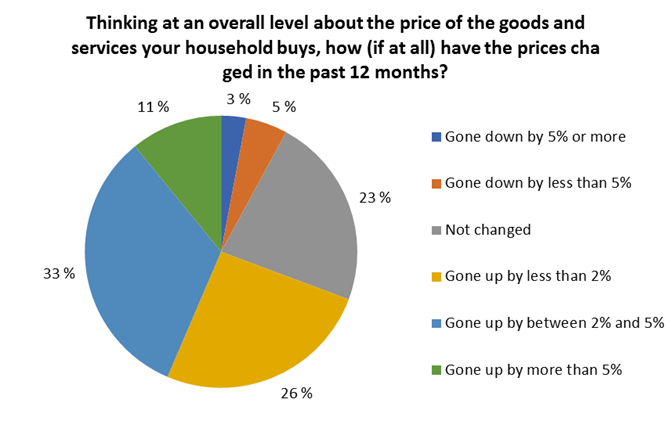 It should be noted that in the UK and US similar consumer-based measures typically run ahead of the official inflation figure. This may be because consumers don’t take full account of items that tend to be bought irregularly and may be regarded as discretionary spend such as electronics whose prices are falling while they are understandably more conscious of high profile areas such as housing and heating where prices are rising significantly. In that respective the subjective cost of living measure may be more representative of needs-based purchases than the official inflation statistics.

The June sentiment survey found that estimated cost of living changes varied significantly by age group, with those under 35 reporting an average rate of 1.3%, those aged between 35 and 54 reporting a figure of 1.9% and those aged 55 and over signalling that their cost of living had risen by 2.5%.

Even though, in many instances, these two groups may be sharing a roof, these results might be consistent with notably different patterns of spendingwith the younger age group more focussed on areas with declining prices such as electronics, clothing and travel and older age groups more sensitive to areas such as fuel, housing, medical services and restaurants/ hotels where official data show Irish consumer prices are more clearly increasing.

Of course, another consideration is that younger age groups (with lower average incomes) may be more price sensitive in their purchasing and more able and willing to use time and technology to search for bargains.