First-quarter earnings growth in 2017 came in even better than the already fairly high levels analysts were forecasting. This was the case in virtually all regions, and above all in growth -oriented sectors. The outlook for earnings growth remains excellent, moreover, for the whole of 2017: analysts have actually been upgrading their full-year profit forecasts for the first time since 2011. All the same, it will be hard to repeat this exceptionally good quarter: the basis for comparison was an easy one for the first three months of 2017, given the extremely weak first quarter of 2016. Commodity prices have eased a little in the meantime and growth is gaining momentum in the euro area but shedding it somewhat in the US. Our investment strategy(*) had anticipated this earnings recovery. In the previous months, we increased the weights of our equity position above the benchmark weight. This strong earnings season reaffirms our positive view on equity. More specifically, we prefer stocks from the Eurozone, with Germany as our favourite, and Emerging Asia. We therefore see no need to adjust our investment strategy 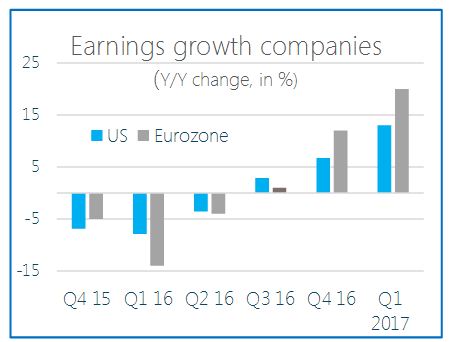 Corporate earnings got off to a flying start in 2017. In the United States, earnings per share at the major corporations listed in the S&P 500 index gained an average of 13% on the equivalent quarter last year. Not only is this the highest figure since 2011, it is also about six percentage points higher than analysts were
predicting. As a result, three quarters of businesses beat the forecasts. Revenue growth of 8%, by contrast, was in line with analysts’ projections.

Euro-area businesses are doing even better. Earnings per share grew in the region by no less than 20% year-on-year. This figure too was clearly higher than the still solid 10% earnings growth analysts were expecting. In this case, two thirds
of businesses came in ahead of projections. Revenue growth of 10% compared to the previous year was similarly good.

The figures also look strong in Japan and the Emerging Markets. Japanese companies traditionally report a little later, but the tone has nevertheless been set there too. The first results to reach us from Japan suggest earnings growth in excess of 25% in the first quarter – well ahead of expectations. We see a similar upward trend in the Emerging Markets.

Growth-oriented sectors in the driving seat

Where is this recovery located and what triggered it? It was actually preordained that corporate earnings would turn in a robust first quarter. Roughly twelve months ago, profits were at their lowest level in years, with a recession in earnings attributed to the weak economic outlook, with low growth and the chance of deflation, and a sharp drop in commodity prices. The bar, in other words, was fairly low. Since then, the economic environment has improved markedly. Business confidence is booming, world economic growth is picking up and fears of a recession seem to have evaporated. Inflation has returned to fairly normal levels, partly because commodity prices were able to recover a little.

The growth-oriented sectors reported attractive results, including energy and commodities, industry, consumer discretionary (the car sector, for instance) and the technology sector. The defensive sectors lagged clearly behind. The healthcare sector alone, did substantially better than its other defensive counterparts, reflecting
the fact that the biotech sector in particular is more growth-oriented.

Growth-oriented stocks (including the financial sectors) thus managed to turn in a fine stock-market performance in recent months, enabling them to beat the defensive sectors. Shareholders rewarded the improved numbers, but have also begun to think ahead. Do cyclical businesses have any more surprises up their sleeve in the coming months?

Forecast earnings growth is one of the most important drivers of the equity markets. The latter respond more to forecast economic growth and earnings than they do to current figures. The outlook is pretty good in this respect too. Forecast revenue and earnings growth has now been upgraded six months in a row – the first time since 2011 that we have seen a series of positive revisions of this kind. It looks as though we are truly on our way this time.

In addition to revenue growth, which is driven primarily by the improvement in economic growth, businesses have to be able to improve their earnings by increasing their profit margins. They appear to be succeeding in this. Corporate earnings and margins have been running at high levels in the US for some time already, while remaining historically low in the euro area. Higher economic growth and the return of inflation to more normal levels are enabling businesses to raise their prices and hence increase their margins. Consequently, the biggest upside potential is to be found in the euro area.

This document is a publication of KBC Asset Management NV (KBC AM). The information can be changed without notice and offers no guarantee for the future. No part of this document may be reproduced without the prior, express, written consent of KBC AM. This information is governed by the laws of Belgium and is subject to the exclusive jurisdiction of its courts. All operations of KBC Bank NV are subject to the General Banking Conditions, the text of which is available in all KBC Bank branches. Registered office: KBC Asset Management NV - Havenlaan 2-1080 Brussels –Belgium
Publisher: KBC Asset Management NV -Havenlaan 2-1080 Brussels –Belgium - PM Brussels - VAT BE 0462,920,226 -IBAN BE98 733-0020767-39 -BIC KREDBEBB -FSMA 026 256 A. A company of the KBC group.