Irish consumer sentiment weakened significantly in early March as nervousness about the impact of the Coronavirus on health as well as on economic and financial prospects increased materially. As a result, the KBC Bank Ireland consumer sentiment index slipped to 77.3 in March from 85.2 in February.

We would highlight two aspects of the change in the sentiment index in March. First the survey was completed between the 3rd and 10th of March. So, it doesn’t incorporate any impact from the Government decision to close schools and colleges made on the 12th of March or the step-up in global concerns about the Coronavirus towards the end of last week.

At this point it seems likely that the April sentiment reading will reflect a further marked increase in coronavirus related concerns. The blow to consumer confidence on top of the emerging hit to incomes underscores the importance of a substantive and speedy policy response to the economic and financial fallout.

A second aspect that should be noted is that the details of the March sentiment survey and the results of a supplementary question asked alongside it reveal substantial impacts overall but also significant variations in the extent of expected impact on the Irish economy and personal financial circumstances.

Such variations would argue that any policy response to the broader economic and financial fallout of the coronavirus should primarily  be targeted towards those most affected by the crisis.

The 7.9 point drop in the KBC Bank sentiment index between February and March is significant but smaller than those seen on a couple of occasions of late when Brexit related concerns prompted sharp changes in the mood of Irish consumers. However, a further marked weakening appears likely in April in the absence of a marked easing in health worries and/or expectations of decisive offsetting actions to limit the economic and financial fallout.

The drop in Irish consumer sentiment was broadly based but, understandably, it was sharpest in the forward-looking elements of the survey. In fact, the two aspects focussed on current conditions; consumers’ views on how their personal finances had developed in the past twelve months and their assessment of the buying climate moved only marginally. Consumer thinking about the future whether in terms of economic activity, unemployment or their personal finances all recorded substantial declines between February and March.

As noted above, our sense is that developments since the survey was compiled would threaten a much larger adjustment. However, the ultimate response of consumers depends not only on the severity and length of the Covid19 related dislocation but also on the scale and scope of offsetting policy actions to support incomes and employment. 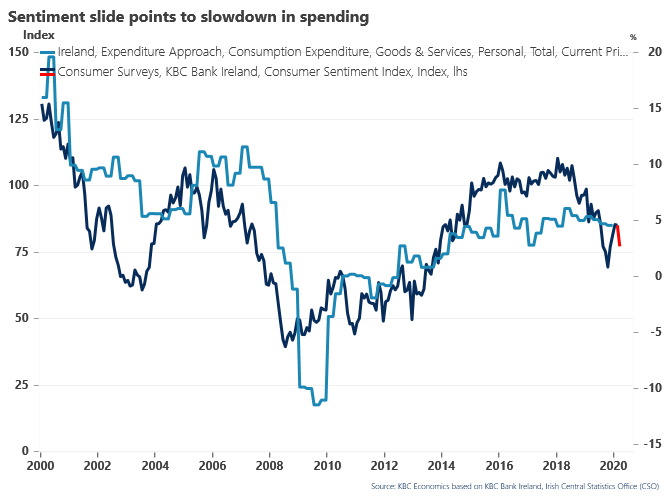 The March survey contained an additional question assessing the extent to which prospective economic and financial costs of the Coronavirus had entered into consumer thinking. To get some sense of the nature of these concerns, we asked separately about the expected impact on the Irish economy as whole and on the respondents own financial circumstances.

As diagram A below indicates, the March survey found that about nine in ten consumers envisage some impact from the Covid19 crisis on the Irish economy. Among these, roughly one in four expected a substantial impact.  Only one in eleven consumers  felt there would be no impact on the economy. In light of the scalation of dislocation in the interim, it seems likely that there is now universal appreciation of the economic threat posed by the virus. In turn, this suggests there would be widely shared support for a large scale policy response. 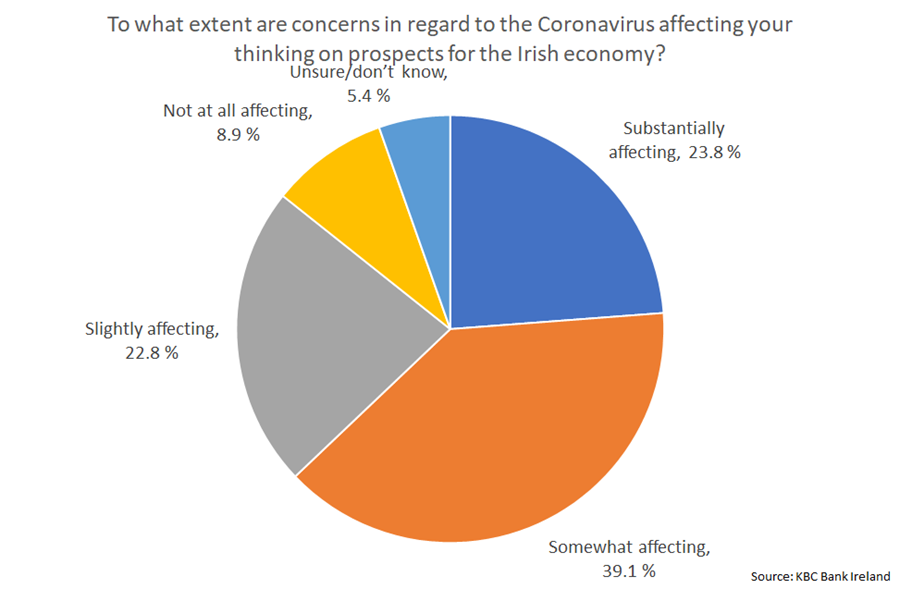 Arguably, consumer thinking in regard to the impact of Covid19 on their own financial circumstances is more notable. As diagram B below indicates just over half of Irish consumers see some impact from the Covid 19 outbreak on their own financial circumstances with only about one in three not envisaging any impact. One in eleven expects a substantial impact. 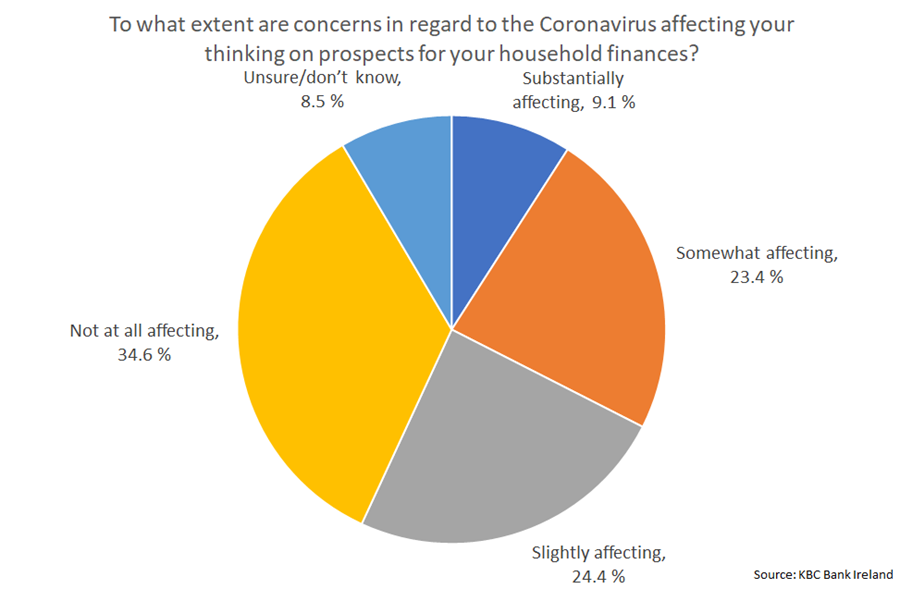 There is little debate that the immediate and primary focus of the policy response should be on health rather than economic and financial consequences of the coronavirus outbreak. However, the March sentiment survey results suggest the importance of measures to offset both the general adverse effect of increased concern on the part of Irish consumers and, more importantly address the likelihood of significant hits to the incomes of substantial numbers of households.

Sentiment and spending will reflect policy repsonse as well as pandemic

The emerging hit to sentiment and spending suggested in the March sentiment survey argues for some Keynesian type countercyclical measures to support activity and incomes. Significant variations in the expected scale impact expected across sectors argue for timely, targeted measures on a scale sufficiently large to significantly offset income and employment losses. In the absence of an ‘activist’ response of this nature, the ultimate economic and fiscal costs could be materially larger.

The necessary fiscal action will entail a large, immediate necessary and manageable hit to the public finances. By definition, it will be impossible to fine-tune the policy response to exactly match the income shortfall resulting from the Covid19 economic hit. However, market development through recent weeks alongside costs to lives and livelihoods may suggest what form of error is best avoided. In the current circumstances, a policy response scaled on what is necessary but proves not to be sufficient may be much more costly in terms of lasting economic losses than one which is seen to be sufficient but proves to be more than is necessary.

It is impossible to be in any way precise in relation to the scale of fiscal package that may be required to support incomes and ultimately restore the economy to a solid and sustainable growth path. However, as modified domestic demand amounts to around €50billion per quarter, it would seem possible that the fiscal cost could readily rise to four or five times the €3 billion package initially indicated by the Government. At current interest rates-and assuming ongoing support from ECB bond purchase programmes, that might add a modest €40-50 million to annual debt service costs which even in very narrow accounting terms should be seen as a very limited cost to preserve livelihoods that might otherwise not contribute to tax revenues in coming years.