Details consistent with improving economy but only modest income gains

The ‘big chill’ of the financial crisis may be well behind us but the economic ‘thaw’ has been slow and uneven.  The survey details continue to point towards a gradual return to more normal conditions, but the pull-back in consumer sentiment in February suggests this may yet take some time.

The drop in sentiment in February from January’s seventeen year high isn’t entirely surprising but the lack of continuous month-on-month gains emphasises the absence of any broadly based consumer boom in the Irish economy at present. Instead, the trend in consumer confidence seems consistent with the prospect of solid rather than spectacular gains in Irish consumer spending in 2018.

The KBC Bank/ESRI consumer sentiment index fell to 105.2 in February from the seventeen year high of 110.4 recorded in January but, as we noted in last month’s analysis, the exceptional January report was always likely to lead to some correction in the February data. We estimate that about two thirds of the pull-back reflects a seasonal correction implying a relatively modest underlying slippage.

The February 2018 sentiment reading is higher than any of the results for the final quarter of 2017, suggesting the broad trend in Irish consumer confidence is still positive. That is also the implication of notably greater positive than negative responses to each of the five key questions on which the survey is based.

However, the fact that there haven’t been back to back monthly increases in the sentiment series since last July testifies to the lack of a pronounced ‘feel-good’ factor as well as highlighting the many uncertainties and pressures many consumers face in regard to their household finances. As diagram 1 below illustrates, the average Irish consumer is sensing a recovery but it is still taking a shape that is two steps forward one step back. 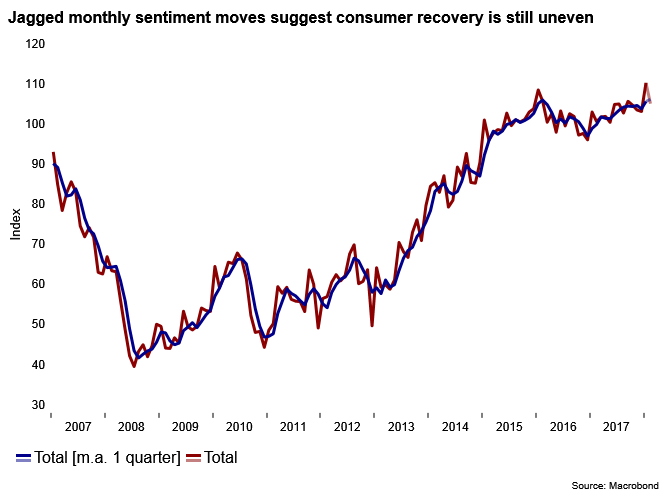 Confidence measures for consumers in the Euro area and The UK also saw declines in February that may owe something to similar seasonal influences in these indicators. Perhaps surprisingly, US consumer sentiment posted a larger than anticipated rebound from a disappointing January number.

It might have been expected that a significant sell-off in global equity markets would have weighed more heavily on US consumers given the relative importance of stocks in US wealth portfolios. This would imply that equity market weakness was not a key driver of poor sentiment on this side of the Atlantic but it could also be the case that less established recoveries mean European consumers remain more sensitive to any threat of a return to recent difficulties.

Both elements of the Irish consumer sentiment survey that relate to general economic conditions showed moderate declines from strong January readings. The turmoil in global stock markets might have played some part but if this were the dominant influence it might have been expected that the pull-back in views on economic growth would have been greater than that in regard to jobs.

These survey results might hint that some consumers may feel short-changed by an Irish jobs market that may not be delivering the scale of pay increases they envisaged. Such concerns could have been heightened by a range of media reports on expected pay gains for 2018 that portrayed notably more buoyant conditions than might have been reflected in consumers’ own experiences.

While ‘macro’ elements contributed to February’s decline in sentiment, the main drives were closer to home. Two of the three elements of the survey related to household finances saw significant monthly declines in February while the third-that relates to how personal financial circumstances have changed in the past twelve months-increased albeit more modestly.

The improved assessment of the past twelve months was largely due to fewer consumers reporting poorer financial circumstances with little change in numbers citing stronger conditions. While a stop to things getting worse is a necessary condition for a recovery, it is unlikely to be sufficient and the February survey suggests Irish consumers don’t expect a marked improvement in their financial fortunes through the course of 2018.

The proportion of Irish consumers that see their personal financial circumstances improving in the next twelve months dropped to 25% in February, its lowest level in fourteen months and down from 30% in January. We are not aware of any dramatic developments during the survey period that would fully explain this change. Our sense is that the combination of post-Christmas bills and very limited changes in January pay packets led to some downgrading of the outlook for family finances in the year ahead.

A more sober assessment of household spending power coupled with the usual post-January sales pull-back in buying plans prompted an unusually large drop in consumers’ assessment of the current buying climate. The monthly drop in this element of the survey was the in any February since 2010. The proportion of consumers anticipating poorer household finances rose modestly to 12% from 9% in January. Overall, these responses imply the vast bulk of Irish consumers see no marked change in their personal financial circumstances through the coming year.

It should be emphasised that overall, the February results are still consistent with a healthy increase in aggregate consumer spending in the Irish economy in 2018 but such gains significantly reflect increases in numbers at work and in the population as a whole that mean more people are in a position to spend. This, rather than the likelihood of markedly higher outlays by the ‘average’ Irish consumer, seems to be the key driver of increasing consumer spending.

Equally, to the extent that average income gains and expectations are both set on relatively modest trajectories at present, there may be scope for the Irish economy to sustain relatively strong rates of economic growth in coming years without threatening any move onto a damaging cost trajectory. Certainly, the February sentiment survey results don’t suggest any trend in expectations that might signal broadly based overheating risks.

In much the same way, that we downplayed the seventeen year high reported in the January survey but emphasised the positives, we would not exaggerate the significance of the decline in sentiment in February but would argue that (like the January survey before it) it suggests a still tricky path lies ahead for many Irish consumers.