With the summer now in full swing and some break from the “home confinement” of recent months sorely needed, many Irish consumers are weighing up their holiday options and trying to assess the implications of health-related restrictions on travel.

As part of our the KBC Bank consumer sentiment survey we set an additional question asking how the coronavirus has altered the holiday plans of Irish consumers for 2020. For this question, a holiday refers to a break away from home for more than five days. The emphasis in the question was on the degree to which the pandemic has altered behaviour in relation to holiday plans. 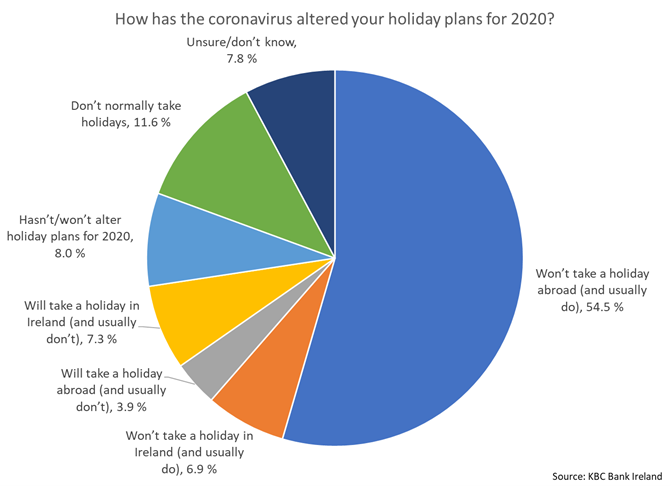 It is not surprising that substantial numbers of Irish people have altered their holidaymaking behaviour because of the pandemic. Even with some increased leeway to travel, there has been evidence worldwide that consumer caution has been an even more important influence on behaviour than official measures around lockdown. For instance, Google mobility data for Ireland shows that there were already significant declines in length of stay for retail and recreation, workplaces, and transit stations prior to the Government’s action to close most non-essential businesses on March 24. As such, it is unclear how many Irish consumers would jump at the chance to travel abroad even if not restricted, given that for significant numbers their own caution may be even more important than public health advice. In this context, it should be noted that while the Irish economy began to re-open in mid-May and many retailers and restaurants have re-opened, time spent in retail and recreation remains about a quarter below its pre-Covid-19 baseline. 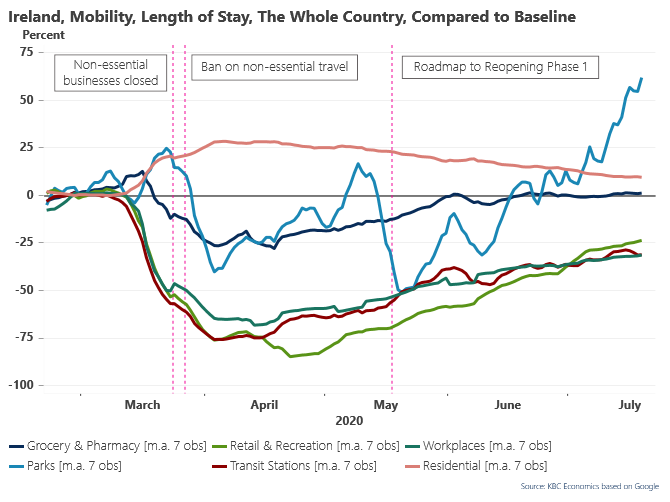 It is likely that caution regarding the coronavirus will continue to prevail and this will feed into increased spending on other items and/or increased saving. At the margin, there could be a silver lining in the holiday “lockdown” for the Irish economy. According to the latest national income and expenditure data for 2019, consumer spending outside of the state is about 6% of overall personal consumption and nearly 2% of Irish GDP. This is slightly greater than the 1.4% of GDP spent by foreign visitors to Ireland. To the extent that the Government stimulus measures help encourage a significant portion of the money Irish consumers usually spend abroad is spent at home instead, it will offer some much-needed support to activity and employment in Ireland this year.