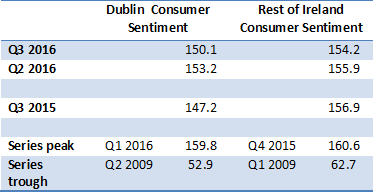 Dublin consumer sentiment weakened modestly in the second quarter of 2016, but the drop in confidence was slightly more pronounced in the capital than across the rest of the country and driven by slightly different factors. In part, the slightly larger correction in the Dublin sentiment reading may reflect a correction following a comparatively strong reading in the previous quarter and, as diagram 1 below indicates, sentiment has tended to follow a broadly similar trend inside and outside the capital in recent years. However, the details of the two indices hint that the mood of consumers in Dublin was driven by somewhat different factors than those of most concern to consumers elsewhere in recent months. 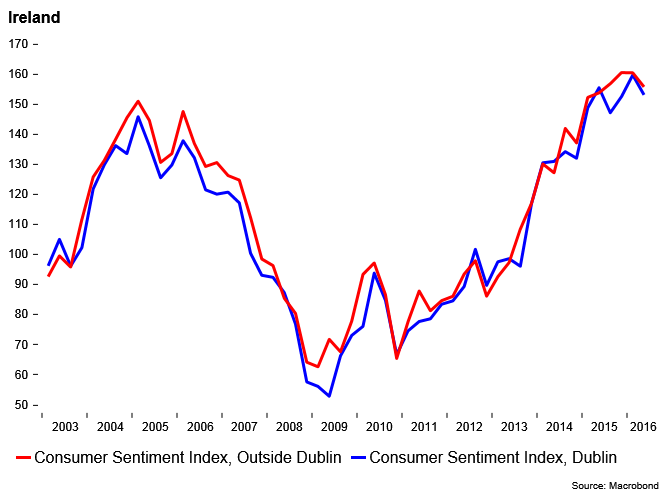 The most notable divergence in recent years between these two ‘regional’ sentiment indices has related to consumers’ assessment of the jobs market. While official data show a broadly based improvement in numbers at work, this survey suggests a strong sense of altogether more buoyant job market conditions in the capital in recent years. In the second quarter of 2016, the two indices moved in opposite directions that also contrasted somewhat with their recent trends.

Our sense is that the negative Dublin jobs reading reflected a number of elements. First, it may owe something to increasing uncertainty about the global economic environment and greater perceived threats to job prospects in the shape of a range of downside risks including that of Brexit-although the survey was concluded before the outcome of the UK referendum on membership of the EU was known. To the extent that the Dublin jobs market is more closely connected to global conditions, this might have prompted increased concerns on the part of Dublin consumers just as signs of healthier domestic demand appeared to support the prospect of healthier hiring conditions elsewhere in Ireland. This might explain some element of the divergence in consumer thinking on job prospects, illustrated in diagram 2 below. 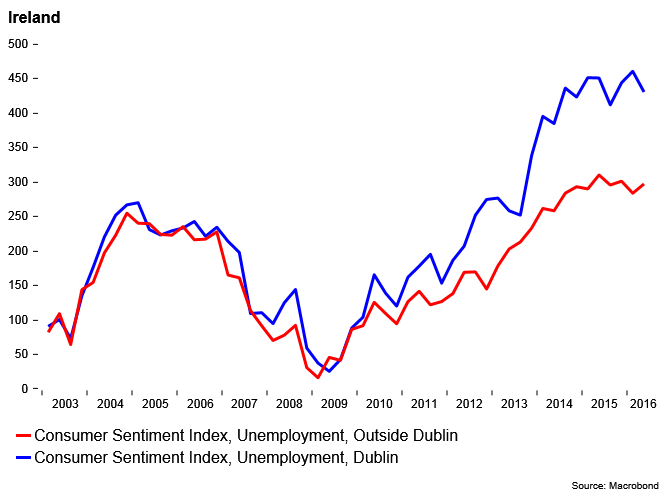 We think a couple of specific developments likely also played some role in the weaker Dublin jobs reading in the second quarter. As was seen in Q3 2015, the announcement of the closure of Clery’s coincided with a sharp drop in the jobs element of the Dublin sentiment survey, suggesting a particular sensitivity to bad news on the jobs front that might hint at a greater sense of precariousness in relation to employment.

One development was the announcement of proposed job cuts at Intel. Although the location of Intel’s operations might mean that technically, these jobs could be considered to be outside Dublin, their proximity to the capital and the broader focus on multinational operations in the greater Dublin area means this news might be expected to resonate more with Dublin consumers.

In addition, the survey period saw a high profile industrial relations dispute at Luas that may have prompted some Dublin consumers to downgrade their assessment of the outlook for the jobs market in Dublin.

While job market concerns weighed most heavily on Dublin consumers in Q2, outside the capital the focus of late was more on household finances. As diagram 3 below shows, the latest data contrast with a trend in household finances that has been notably more positive outside the capital than in it during the past year. We would be surprised if this reflected a notably faster pace of earnings growth as this would seem to contradict the comparative readings on the jobs market. One possible explanation might be differences in the pace of increase in living costs. For example, rapidly rising rents and mortgage borrowing constraints weighing more heavily on the capital while falls in motor fuel prices may have more important for consumers outside Dublin. 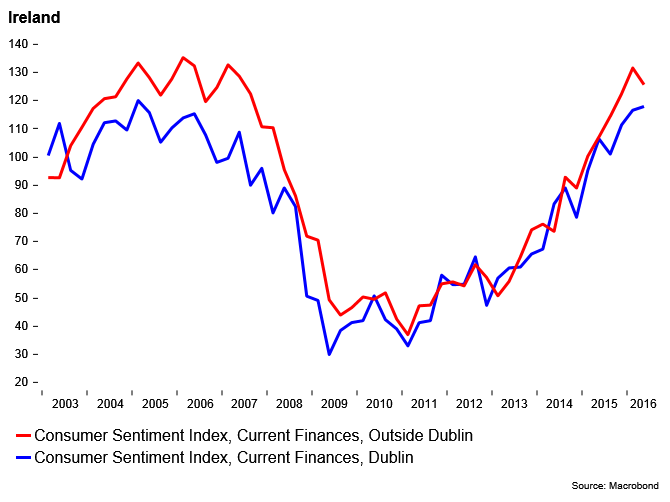 We cannot adequately explain the weakening in the current finances element of the sentiment index for consumers outside Dublin in the latest quarter. A range of factors might be consistent with this development. Some that come to mind  include the possibility that in the aftermath of the general election campaign there was a heightened sense of the limited follow-through from economic recovery to household finances, partly related concerns about the stability of the new Government given its particular influence on economic conditions outside the capital could also be relevant ,  while increasing spill-over from problems in the Dublin property market and pressures on agricultural incomes might also be considered.