Consumers conscious of risks to economic outlook and re-opening issues

July reading suggests solid rather than spectacular rebound in spending

Irish consumer confidence slipped marginally in July from the two year high recorded in June. Although the weather was exceptionally good as the survey was collected, consumers seem to be increasingly conscious of some gathering clouds in the economic sky.

A still uncertain economic outlook coupled with growing inflation fears, together with practical issues around the ‘opening up’ process and increasing nervousness about the Delta variant of the Coronavirus, appear to have combined to make Irish consumers a little more cautious about the outlook both for the economy as a whole for their own household finances.

A ‘pause for breath’ after five months of increasing consumer confidence is not entirely surprising and the scale of pull-back in the sentiment index is relatively modest. As a result, we would not interpret the July reading as signalling a notably darker mood among Irish consumers. While we don’t think the July sentiment data suggest Irish consumers have become notably more risk adverse, it does suggest they remain very much risk aware.

That said, the softer July survey hints that a broadly based ‘feel-good’ factor is still lacking among Irish consumers and exceptionally fine weather hasn’t mechanically translated into sunnier forecasts for the economy and consumer purchasing power. So, we continue to see consumer spending rising rather than roaring in 2021.

The KBC Bank consumer sentiment index declined to 84.7 from the twenty four month high of 87.2 reported for June. The 2.3 point drop pushed the index below May’s reading (85.8) but leaves it well above that of April (77.9). Moreover, the recent trend, as expressed in the three  month moving average for the survey, continued to edge higher ( 87 against previously). So, the July reading hints at just a minor re-adjustment of Irish consumer thinking of late.

The most notable weakening in Irish consumer confidence in July related to the economic outlook. While the tone of most economic commentary remained positive of late, a number of concerns have attracted increased attention of late and may have weighed on consumer thinking in relation to the economy.

The first of these is the growing impetus in international discussions towards an agreement entailing a minimum global corporation tax rate above that currently prevailing in Ireland. While this process is still far from complete or clear-cut, risks in this regard and an associated heavy focus on potentially material damage to the Irish economy, both in terms of revenue and reputation, might be expected to justify some downgrade to the economic outlook.

A second source of rising concern of late is the trajectory of house prices and widespread expectations of continued upward pressure in this area in coming months. Debate around possible policy responses appears to have heightened worries in this regard. More broadly based difficulties around a step-up in living costs, both lately and looming, would have further contributed to a perception of problematic conditions for personal finances as well as the broader economy.

A third area that may have influenced consumer thinking in July relates to significant logistical difficulties in ‘opening up’ the Irish economy fully at a time when the Delta variant of the Coronavirus is seen to be posing a much increased risk in terms of infection numbers in Ireland and elsewhere.

Irish consumers’ thinking on the outlook for jobs weakened only fractionally in July, a notably more resilient reading than that in relation to the broader economic outlook. Although official labour force survey data painted a rather downbeat picture of current conditions and the survey period also saw some high profile redundancy notices, these were countered by a continuing stream of new job announcements and reports of very buoyant conditions from various recruitment companies.

The smallest decline in the sentiment survey in July was a negligible drop in the assessment of household financial conditions through the past twelve months. We previously noted how large scale fiscal supports through the pandemic made a marked difference to the financial circumstances of Irish households.

However, consumers appear somewhat more cautious in relation to the outlook for their personal finances for the next twelve months. In part, this reflects worries about rising living costs. It may also owe something to the expected phased reduction in fiscal supports. Finally, it could speak of uncertainty about income growth as the economy moves into a post-pandemic mode, given increased concerns about the broader outlook for activity in this month’s survey.

Not surprisingly, consumers also scaled back their assessment of the buying climate in July. We again highlight that the message of the sentiment survey suggests a strong rebound in consumer spending as 2021 progresses but perhaps not the spending frenzy that some have predicted. As the diagram below illustrates, the level of consumer spending reported for most of 2020 and the first quarter of 2021 is far below that consistent with the long term relationship between sentiment and spending. 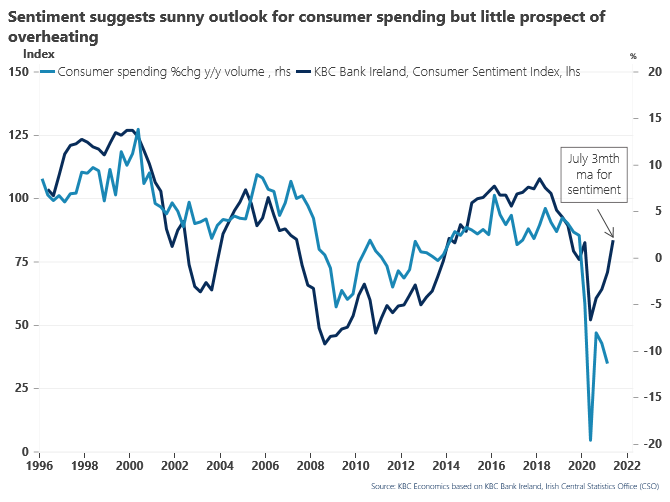 The most recent sentiment data would seem consistent with a growth rate in the region of 5% y/y for consumer spending as we move into the second half of 2021. This would represent a sea-change from the 11.3% y/y decline in consumer spending reported in the latest national accounts data. As such, this represents a very positive development but it is still the case that a rebound of this magnitude would still fall well short of a full recovery in Household spending. In that respect the slight pull-back in the KBC Bank sentiment survey for July suggests Irish consumers are on a positive path but the journey to a healthier economy is likely to be bumpy.