Irish consumer sentiment edged higher in January as post-Christmas sales and positive jobs news more than offset ongoing Brexit concerns.  As consumers continue to juggle the risk of the UK crashing out of the EU with the reality of modestly improving conditions of late, the likelihood is that sentiment and spending indicators will remain on a choppy path in early 2019. As bills for Christmas spending arrive and UK difficulties in delivering the EU withdrawal agreement increase, the likelihood is that Irish consumer confidence will weaken in February.

The KBC Bank ESRI consumer sentiment index increased to 98.8 in January from 96.5 in December, the second monthly increase in the past three months but one which leaves the current reading well below the 2018 average of 102.5.

As the diagram below indicates, the sharp weakening in sentiment that occurred between July and October has been followed by a period of relative stability of late as consumers await further clarity on Brexit to assess whether 2019 will be a year that pivots towards promise or pain.

The graph which compares movements in sentiment to the smoothed trend in retail sales suggests Irish consumers have adopted a more cautious approach of late. So, there seems to be scope for either a soft Brexit ‘bounce’ or a hard Brexit ‘bump’ in spending as 2019 progresses. 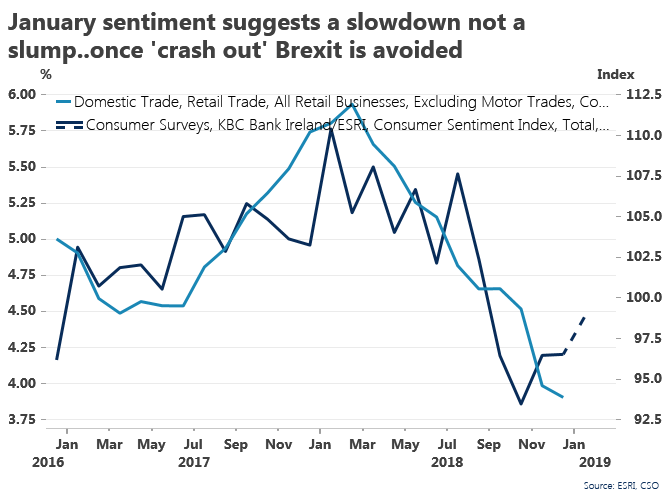 The small improvement in Irish consumer sentiment in January was at odds with a sharp drop in the corresponding US indicator that likely reflected a combination of concerns related to the Federal Government shutdown and the sell-off in equity markets in late 2018. In contrast, Euro area consumer confidence edged higher, in part because of a likely seasonal easing in the worries weighing on French consumers while UK consumer confidence held steady albeit at a relatively weak level.

Our sense is that, as in previous years, a significant Christmas and New Year break entailing a shift in focus away from financial news towards family and friends likely gave some boost to January sentiment readings in many countries on this side of the Atlantic. In this context, reflecting the survey period encompassing the first half of the month, Irish consumer sentiment has risen in January in twenty of the past twenty three years. In contrast, a shorter break and the greater near term disruption caused by the Government shutdown in the ‘States would go some way towards explaining the particular weakness in recent US confidence measures.

The details of the Irish sentiment reading for January highlight the ‘cross-currents’ affecting consumer thinking at present with three of the elements of the survey higher and two weaker than in December. The contrasting responses to various elements of the survey suggest consumers aren’t simply blinded by Brexit even if they are struggling to assess the likely extent and timing of any fallout.

Not surprisingly, the weakest element of the survey in January, as in recent months, was consumers’ assessment of the outlook for the Irish economy. For the second month in a row, more consumers expected weaker rather than stronger conditions to prevail in the next twelve months. Although the number expecting an improving economy climbed slightly from 26% to 28% of respondents, the share fearing weakness increased more from 32% to 36%.

In the absence of any dramatic new developments in the Irish economy, with the possible exception of positive news in the shape of an earlier than generally expected return to surplus in the public finances,  our strong sense is that political chaos in the UK and associated concerns about a related Brexit fallout on the Irish economy drove this result.

In marked contrast to consumers’ concerns about the outlook for economic activity, there was a slight improvement in thinking on the outlook for jobs. This divergence likely captures the difficulty Irish consumers (and economists) are having in assessing the path the Irish economy is likely to take in the year ahead.

Our sense is that responses to the jobs question in the survey were heavily influenced by upbeat end of year reports by the IDA and Enterprise Ireland in addition to a continuing sequence of new job announcements by a range of companies. Such announcements underpin the current reality of healthy growth that must be weighed against the threat posed by Brexit. Concerns about the threats posed by Brexit and perhaps by specific warnings about related increases in prices or even shortages of food may have contributed to a slight marking down of the outlook for household finances in the year ahead.  In contrast, consumers were marginally more positive when asked how their personal finances had developed in the past year.

More notably, as typically happens in the January survey, spending plans picked up reflecting the lure of post-Christmas sales.  However, the monthly increase was the smallest seen in any January since 2002. In part, this may reflect changing shopping patterns such as the advent of ‘Black Friday’ or the practice of ‘perma-sales’ in some sectors. We think this more muted seasonal spend also reflects a more cautious Irish consumer even if January VAT receipts suggest spending growth is still solid.